This essay was written by my crafting vendor friend, Chris Cornell. It cracked me up, and she said I could use it on the blog! It refers to the day in October that is linked below.

Is Your Weed-Whacker Gas Powered?


So I learned something about my friend, Joan, the other day. Well, and maybe just as much about myself as well. I learned that sometimes it is very easy to slip into common assumptions. Ha, ha, ha, I let myself do this and then the truth of the matter was a big surprise! For example: Joan has been talking about weed whacking her front yard in preparation for an Author/Vendor sale which she is hosting. I willingly offered to come and help her weed whack, as this would benefit all the participants, and make it easier for mowing which is being done by my brother.

She asked me, just to be sure, if I was volunteering for weed whacking. She said, “Weed whacking is hard work”. I’m thinking how hard can it be? You stand there and move the weed whacker back and forth, and the string on the end does all the work. What is she thinking?

Well, let me describe Joan’s weed whacker for you. It is a tool with a wooden handle about three feet long. On the end is a metal frame similar to a rake, but it holds a serrated blade, sharp on both sides. To whack the weeds, it takes a good deal of manual labor to swing that weed whacker back and forth. It does the job, but it’s a back-breaking, thumb-blistering, arm-muscle strengthening exercise! I accomplished this “exercise” whacking just one row from the top to the bottom and that’s all I could do. Joan says, “I can go up and down and up and down before I have to take a break”. Now you’re just bragging, Joan.

At least I did help her put up the sign in her yard. Let me tell you, not only can Joan weed-whack like crazy, she is also very good at swinging a sledge hammer. I was holding the posts as she was pounding them into the ground. She did not miss once!

In the future, I will definitely be asking specific questions, such as, “Is your weed-whacker gas powered”?

This can also serve as a little advertisement for Chris' memoir which will be available this spring. It's called Moments in Time, and includes vignettes of growing up in rural Mason County. Stay tuned! If we manage to be allowed some vendor events this year, I'm sure it will be available.

In other news: I edited. I did a little research.

The sunset was spectacular, and wasn't until after 6 p.m! 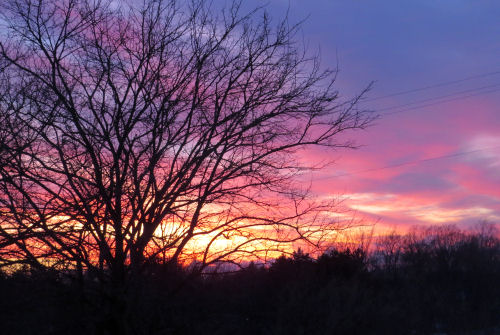 Posted by Sharkbytes at 7:28 PM

Fun essay. I have to say that I would have assumed the same as Chris, that the weed whacker was gas powered.

Ann- and I never even thought of that!