It's been a long time since I brought you pictures of silos, but this one is unusual, and I've been wanting to share it for a while. It was also on yesterday's walk. So, here you go. The primary section of the barn has fallen, but the silo remains. 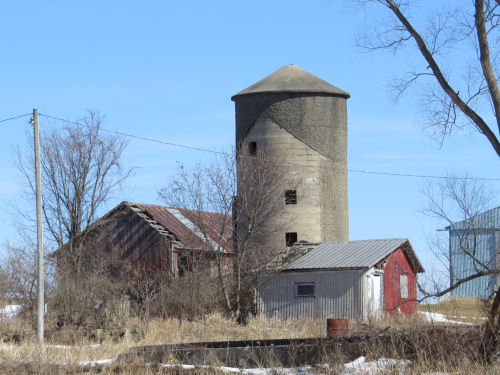 This appears to be a rounded concrete block silo. Block silos have thicker walls than concrete stave silos (see link below). From what I could find, this probably predates the stave silos. Farmers were experimenting with materials other than wood, because the wood rotted from contact with the silage.

I learned that the familiar tower silos we associate with farms didn't come into use until the 1880s!

Here's a closeup of the wall where it was previously not exposed to view because it was inside the barn. Those blocks appear to me to be long and curved. That would suggest they were either custom cast or commercially available. In the short time I spent, I could not find a company that made such an item. That doesn't mean it didn't exist. However, a web site at silo.org verifies that farmers often made their own molds and cast blocks over the slower winter months. Molds could also be leased from construction companies. 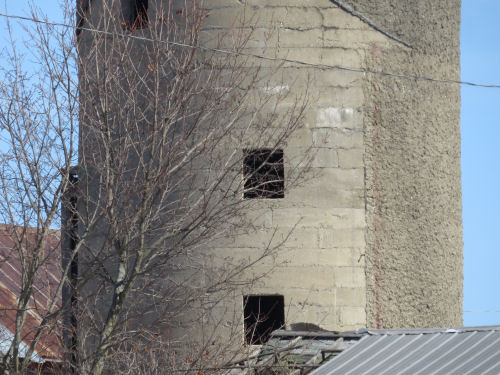 The top is the most fascinating of all. It's the "coolie hat" style, and it seems to be cast concrete. That must have been one heck of a project to get it in place! Not to mention casting it without having it crack as it dried.

Another very interesting feature is the apparent stuccoing with concrete that was done to the exterior in the areas that were visible. 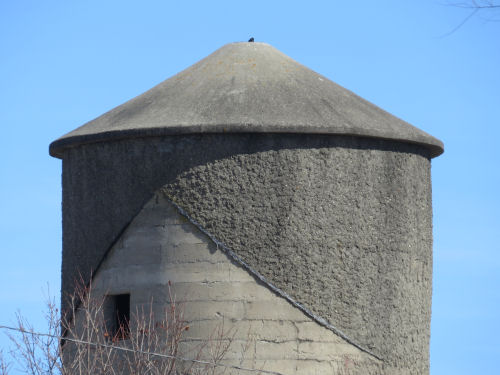 As if I don't have enough projects/ideas... this makes me want to write a book with lots of pictures about historic silos.

In other news: I had a longish meeting in the morning, and the rest of the day was spent doing tax prep. I took a short walk. But I feel quite productive!

Interesting info about the silo. I'm fascinated by the top and the textured exterior walls

We have some band and stave silos in our area and a lovely example of vitreous tile structure but I'm not aware of any similar to this one. Nice study of an architectural oddity (in today's world).

Vanilla- This is the only one like this that I recall seeing.