Tonight we'll go back to Girl Scout Camp Bailiwick. To be specific, at the time I was involved, this was the camp associated with Brownies- younger girl scouts.

You know that I love and collect embroidered patches. I have these. I suspect I was able to purchase them at the camp store at Comstock. I don't know how I got those year rockers. Those are definitely from my Bailiwick years. Perhaps the patches were discontinued. Perhaps my mother got these patches. Read on for why I think that is possible.

The central patch is for our Girl Scout Council. This no longer exists. Councils have been expanded and rearranged as Scouting waned in popularity and communications and travel became easier. Anyway... I won't moan about all that. I will tell you that Tiotomca is a made-up word representing the three counties in the council. Tioga, Tompkins, and Seneca. Not all of Seneca county was in this council. The important thing to remember is that my village, Interlaken, was the northernmost community in the council. That will come into the narrative several posts later. 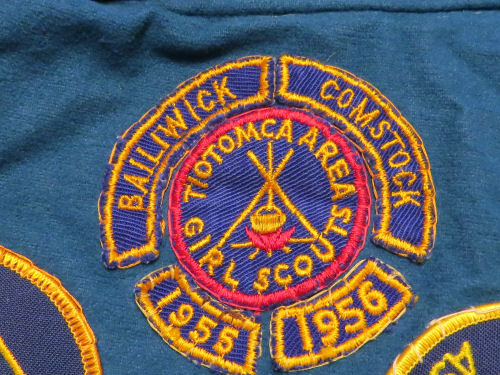 So, Bailiwick was strictly a day camp. Brownies were not considered old enough to have overnight camping. And I managed to be a participant at Bailiwick from the age of 4. You ask, "How on earth did you manage that?" Most people know that pre-schoolers aren't Brownies. Back then, there weren't Daisy Scouts (Kindergarten and 1st Grade), but even now, not preschoolers. However, my mother worked as a counselor at the camp for a few summers. There was a "Unit" called the Chipmunks that was actually just daycare for children of counselors. So there you go... I was a Chipmunk. Since Mom was a counselor, perhaps she came into posession of these patches. I sure wish I could find more of those year rockers that go with it. But, without the central patch, even if someone had some, they wouldn't even know what they went with.

And then I was a Brownie, and was attending day camp sessions at Bailiwick. I have no pictures at all from the Bailiwick years. I did not have a camera, and I guess Mom didn't take any pictures.

Here's a little tidbit of info. Just uphill from the lodge was a campfire area, and that's where the Chipmunk Unit was located. I suppose it was there because of the ease of dropping off and picking up the little kids.

Remember, this camp is on a very steep hill that descends to the lake. The regular Units march down that hill. The older the campers, the farther down the hill they had to walk. There is no road to the lake on the Bailiwick side. The latrines were at the top of the hill near the lodge.

There was a waterfront at the lake with a changing building and a "buddy board." We did have swimming, and there were strict rules. Everyone was issued a numbered tag from the board. Each tag had a big safety pin. We pinned these to our suits, and we chose a buddy for each swim session. If a signal was given (I think maybe two blasts on a whistle) we had to stop whatever we were doing, find our buddy, grab her hand and hold our clasped hands high. This was a fast way for the counselors to check on the swimmers- to be sure no one was missing. I guess in theory, a set of buddies could go missing until the numbers were returned to the board at the end, but the probability of that happening is low.

I no longer remember if Bailiwick sessions were one or two weeks. But I know I was a Chipmunk or a camper there every summer from 1952 until 1957. We had age-appropriate activities, did crafts, played games, learned woods-craft, had campfires, learned campfire cooking, etc. It seemed as if the walk down to the lake was miles long, and even longer coming back uphill. Little-girl campers rarely went in that beautiful lodge (pic at link below). It was a magical place reserved for counselors and other grownups! I remember that I did get to go inside it once as a Brownie and it seemed huge!

Fast-forward to 1966. I had just finished my freshman year of college, and what could be more logical than to return to Bailiwick as a counselor? Of course, that's what I did. For two summers, 1966 and 1967. I became familiar with the inside of the lodge. I spent a fair amount of time scrubbing that latrine building with Clorox water. I herded groups of noisy, energetic little girls.

A pavilion- just a concrete slab with a roof- had been constructed uphill of the lodge where the girls could gather while waiting for the transportation buses. It was also a space large enough to protect all the campers when it rained. There were no buildings at the units.

Some small number of you might have heard me say of my singing voice that "it's best use is for camp songs." Well, somehow, I got the reputation as a counselor for being the one who could lead songs. Probably part of that was due to the fact that I could remember all the words to all the verses of some very very long songs. These are of paramount importance when there is a scary thunderstorm, or the buses ran late. I could keep a hundred little girls singing for an hour or more. I got reasonably good at bringing in the various groups to do songs as rounds. Anyway, I remember a lot more about leading songs until we were all totally hoarse than I do about planning campfire stew or teaching knots!

There is just one more piece to the Bailiwick saga. I guess I should end with another C word- Consultant. That steep hillside with hundreds of girls descending and climbing the pathway for 60 years had led to some serious erosion problems. For a college class in Ecology, I wrote a report about that with suggested ways to fix the problems and restore the vegetation. A copy was sent to the Council, but I don't know if they ever took it to heart.

Actually, there is one tiny but important Bailiwick story that I will save until the very end of this series. It's not a very happy ending, but it is what it is.

In other news: I did a bunch of boring paperwork and more house cleaning. Ho hum.

I remember being a brownie and then a girls scout. I think I stopped in either 4th or 5th grade

Lulu: "Our Dada says he was a Boy Scout for a while, but he never went to any of the camps, not even the nearby ones in the Adirondacks. I don't know why not ― it seems like something he would've done since he claims he liked going up to the mountains so much!"

Whatwonderful memories! I went all the way through the Boy Scouts here.

Ann- Scouts was one of the best things that ever happened to me.

Lulu- tell Dada I'm sorry he missed out on camp.

Stew- I think Scouting was a tremendous program.