When I was looking up info about the White River railroad bridge the other day, I learned that the line that went from Muskegon to Big Rapids, passing through White Cloud, was the Chicago and West Michigan Railway. It was bought up by the Pere Marquette Railroad as many of these short lines were. In fact, it's often difficult to keep track (pun intended) of which railroad lines were owned by whom, and what name they were using at any given time. C&WM at some period of time owned the Newaygo and Lakeshore RR, and the Grand Haven RR, and the Chicago & Michigan Lake Shore which ran from New Buffalo to Pentwater. The access to Pentwater Pathway Trails that I sometimes hike is on that previous right of way.

So, anyway, I overlaid the RR map on the trail map, realizing that I was going to cross that former line on my hike on Sunday. I figured if I knew about where to look for it, I might find the old rail bed.

Not a problem! I certainly would have recognized this as a former railroad without a single clue, I just would not have known which one. This is the view looking northeast. 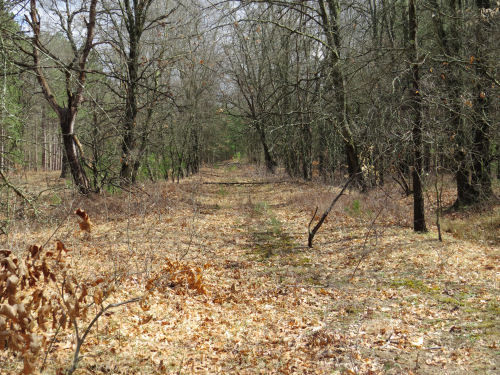 And here is the view looking southwest. It's quite open yet, which probably indicates it was a well-built base- not like some logging lines where they just leveled the berm and threw down some rails. Probably plenty of ballast if you went digging in that. A pipeline and its access road is now parallel to the old rail line (not visible in the pictures). 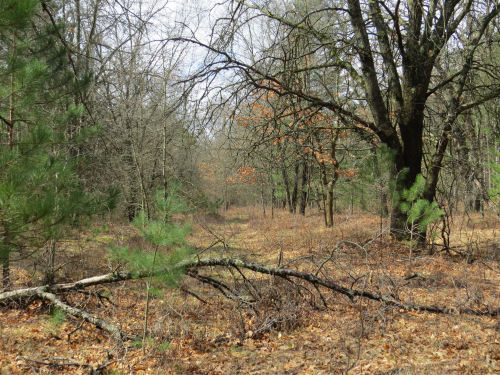 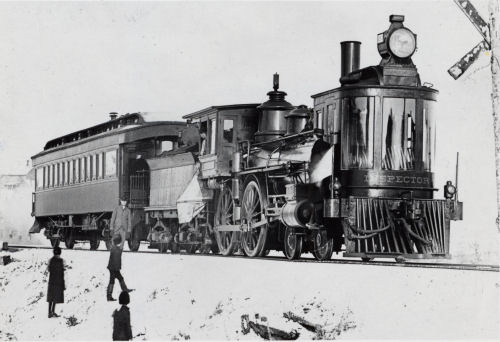 And finally, here is the logo of the line. It's nickname was the Fruit Belt Line. Since it operated from some time prior to 1881 to 1897 when it was purchased by the Pere Marquette, apparently the area was already known for fruit growing. I find this interesting, since logging was the big item then. I always thought almost all the farming followed the clearing of the land. However, I did some research, and the French realized that southern Michigan had the right climate for fruit trees. They were cultivating apples and pears in Michigan in the 1700s. Berrien County (where New Buffalo is located) in the southwest corner of the state, was already known for growing peaches to ship to Chicago by 1834. The French explorers had noted the land adjacent to Lake Michigan would be suitable for growing fruit as early as 1670!

I love figuring out all these old railroad connections. Can't you just picture a train full of people on their way to White Cloud, or perhaps Big Rapids, looking out at the same landscape? OK, minus the pipeline!

In other news: I walked with Cathy in the morning- some road miles, did volunteer work in the afternoon, and then had bell choir.

I love the look of that logo. Interesting history about the railroad.

I spent time figuring out the railroads here in southern Ontario. It was fun and interesting.

Charlee: "Our Dada says that looks like a great place to take a mountain bike!"
Lulu: "Dada has a mountain bike?"
Chaplin: "Oh yeah! Although mostly these days it seems like a sit-in-the-garage-gathering-dust bike ..."