This afternoon was a mixed bag of activities. I went to pick up something from a friend. She's an avid birder, and there was a red-headed woodpecker at her cabin! It was also at her cabin where I got my only local sighting of a yellow-bellied sapsucker a few years ago. I also saw two pileateds today, but they are so shy, it's really hard to get a picture. 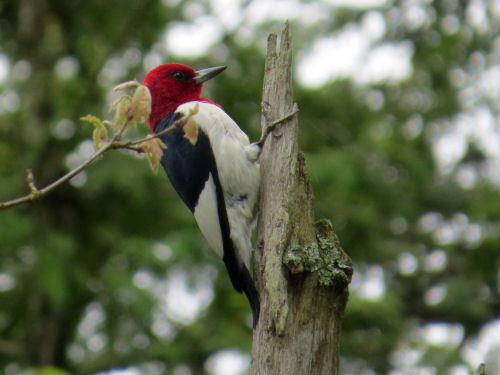 The one and only one benefit of humid weather is that my hair curls. Since I needed a new, good picture of me, I wore decent clothes (OK, only on the top half), and had her snap some pictures. What do you think of this one? Best one taken in a while, anyway. 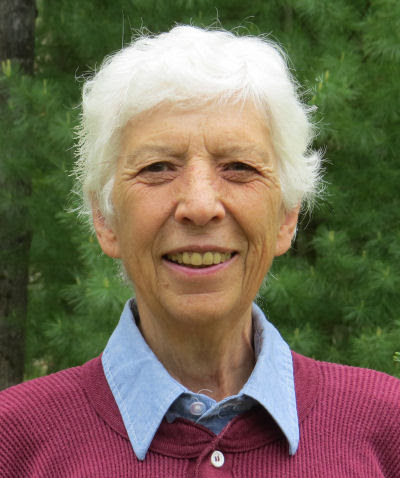 Then I changed and headed to the trail to do just a tiny bit of work. Two Carsonite posts needed to be removed. They were 1.5 miles in. So I carried the shovel in, dug them out (they have a flap that makes it so they can't just be pulled out), and carried them and the shovel back to the car.

It was really miserably humid by then. But here's another red-head, the wild columbine. I used to have tons of it growing here at my house, but it's all disappeared. 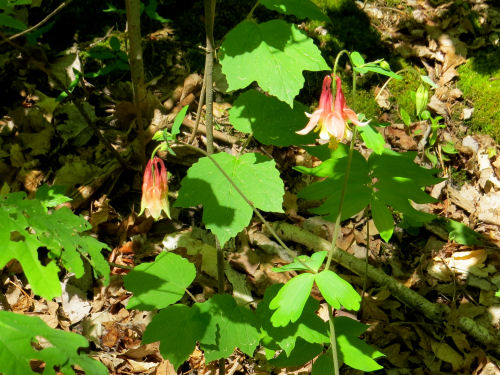 I got a little ahead of myself on the story. Part way back to the car the trail crosse a 2-track that is not on any maps. It clearly is being driven a lot, and we need to put two posts in at that location instead of where they were. Today, I temporarily stashed the old posts and shovel in the woods and walked that road in both directions with the "tracker" on in my app so I could see where it goes.

Along the way something jumped in front of me. Can you see it? 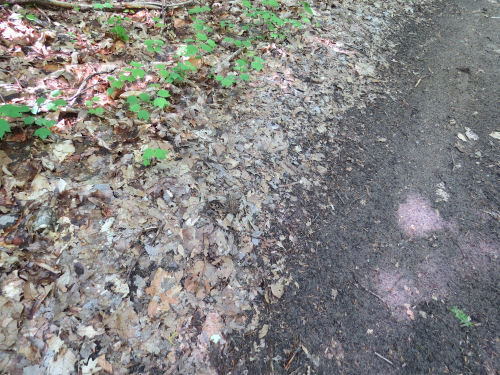 My guess is, probably not. I had to hunt for it and I was right there. It's a nice big toad! 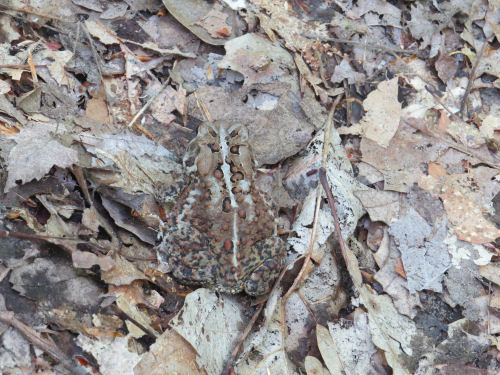 We had enough rain this morning that the trees were too wet to paint blazes. But I was hot enough anyway that I didn't feel like walking 2 miles back out with the paint kit, even if things were dry. So I called it a wrap for the day.

However, I did drive home on a back road. It was not a new route to me, but one I haven't taken recently. Mostly just straight, but here is one bit of a nice place along the way. It's hard to explain how happy it makes me to just putter home on dirt roads. 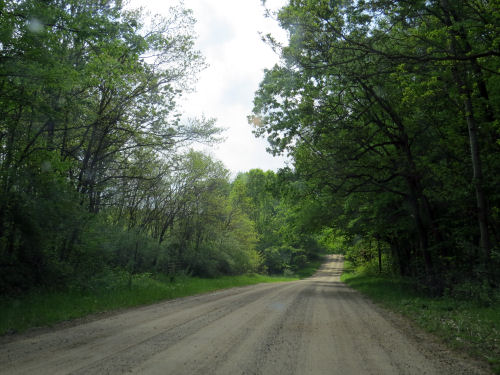 In other news: I tried to get my head back into writing this morning. I only managed 364 words, and I may end up trashing them anyway. It's just more talking, and I think I need something to HAPPEN. We'll see. Maybe they only need to be moved. Anyway... I'm trying to get back on track.

Excellent headshots, yours and the woodpeckers.

That's a great picture of you!