The primary project of the day was some more blazing of Andrea's trail section with her. We met at noon and did blazing until 2 pm. I drove in as far as the trail on the dirt road I explored last time so that I only had to carry the heavy post driver a few feet instead of over half a mile. Stay tuned.

The greenery is fully leafed out, and we had to do quite a lot of lopping in some places to clear sight lines to the blazes. This tree was really surrounded by saplings that obscured the blaze before we cleaned it up. Nevertheless, we got one more mile done in one direction. 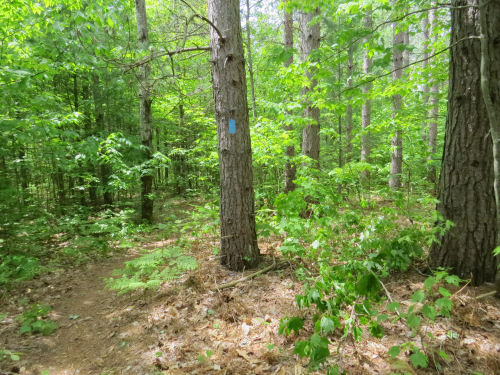 Then, I continued to work on my other trail work project- getting the stickers and Carsonite posts up to date. The person who had the post driver delivered it to my house yesterday. Today I put in two new posts at the dirt road I followed last week. It gets a fair amount of traffic- enough that it's not a literal two-track, but a road, so it really should have posts on each side. Now it does. See the one on the other side of the road? 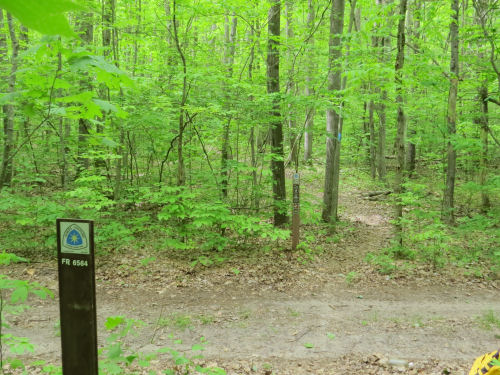 Once the posts were in, I put all the correct stickers on. Top is the NCT triangle, next the Forest Service emblem. Then the new 8-state strip sticker, then the use stickers. In this case, that means no horses, but bicycles are allowed on this section. Since the words on the strip say "closed to motorized uses" we only add the no ATV sticker in places that might be problematic, like where our trail crosses a motor trail. 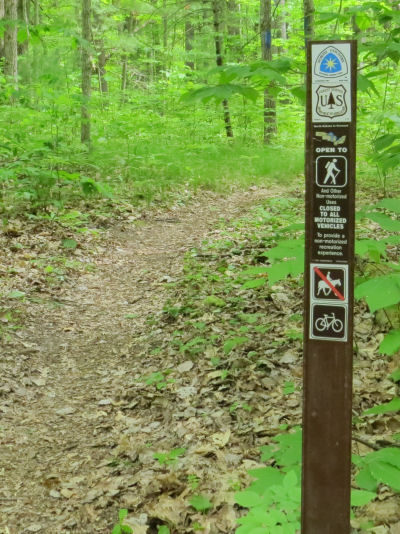 I also fixed all the stickers at 5-Mile Road. This included removing one extra Carsonite post, and adding Carsonite backing strips with the correct stickers to the sides of the 4x4 post that is there. Some of them were correct. Some were not.

In other news: I did odds and ends before and after the work outing.