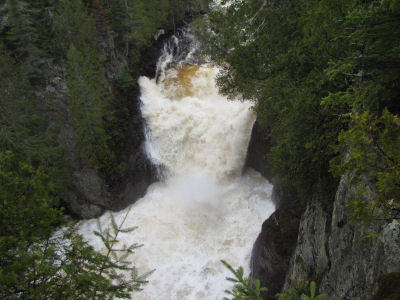 None of the things I wanted to show you today really turned out, but I keep working on labeling the pictures from the May hike in Minnesota, so I thought I'd show you a few more of those. I really gave that hike short shrift.

The first picture is Devil's Kettle on the Brule River in Judge Magney State Park. We had only walked about 20 minutes from the very start of the whole hike before we came to this exciting feature, where the water pours down into a rocky bowl and churns around before heading down to the river. So this view is readily accessible to most people. 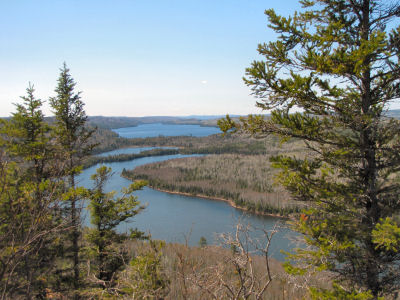 This view, however, is only for those who are willing to work for it! I think that the Border Route has some of the most spectacular scenery anywhere along the North Country Trail, but it takes some serious hiking to reach it. On the right of the picture is Canada. We are looking west down Rose Lake. The small lake in the middle is Rat Lake, followed by the blunt end of South Lake. 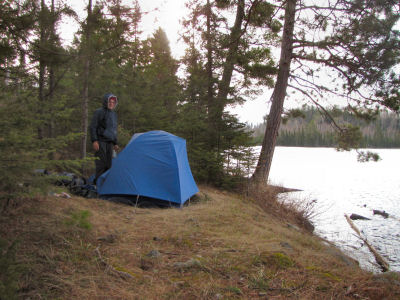 Finally, just to point out that not every location on the trail is rugged and intimidating, here is our campsite the night following that spectacular view. The four of us had three tents, but Marie and I had this lovely spot by the calm waters of Topper Lake. At that lake I saw (but couldn't catch a picture of) what I think was a Common Merganser duck. I'm not so great with waterfowl, but it was a large white duck with a skinny neck, dark head and a black wing tips. It was awesome!

The upcoming Minnesota trip won't have such spectacular sights every day, but each trip has its own special secrets!

I wish I was there! The scenery looks incredible. You are a very good photographer, by the way! :)

I always think that not because you are rich then you can go anywhere you like. You have "to work for it". Yours is one example, Mount Kinabalu is another.

Looks a lot like some places here in WV. I need to get out and hike before long. Always seems to be too many people counting on me anymore. I need some fresh air and a beautiful outlook!

what beautiful and wonderful sights, yes, a lot of nature's wonderful gifts can only be viewed with work put into it.

It's all beautiful scenery. I think I like Rat Lake the most. Cool name.

Beautiful photo of the lakes

Hi Stacie- This whole hike had so much beauty that it was overwhelming.

Marie- Hey, thanks! I keep trying... when you are hiking though you can't wait for the light to be right or that perfect shot.

rainfield- yes, that way we appreciate the hikes more, I think.

Rebecca- Those outdoor times really do heal and refresh, don't they?

betchai- I think we like them better when we have to work for them!

Ratty! I just knew you would think that was a great place. I am clairvoyant!

NCT- Isn't it great? Worthy of a National Scenic Trail.

Vanilla- yes, in the spring those rivers on Superior's north shore are just raging!