Viper's Bugloss - One of My Favorite Weeds 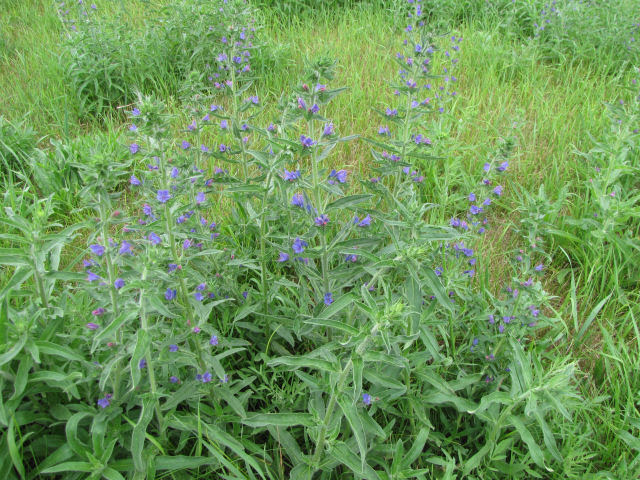 I promised you this weed days ago, and here it is. Meet Echium vulgare, Viper's Bugloss, or sometimes just called Blueweed. It grows in a spike of flowers, up to about 30 inches tall. It's in the Boraginaceae family, which means it's related to Borage, Comfrey, and Forget-me-nots. The color ranges from a pale blue, to the bright blue shown here. I really love the color! (I've also made the background tile for the blog from it- as of this date anyway.)

The plant is not native to North America, but it isn't listed as invasive except in the state of Washington. It grows all over my lawn, but since I do try to keep the lawn mowed, I've managed to get some of them to grow in one of my flower beds. It's a biennial, which means that it takes two years for it to set seeds. In the first year it just grows a flat rosette of strap-like leaves. In the second year the flower stalk appears. I've had good luck moving the rosettes. It self-seeds easily. 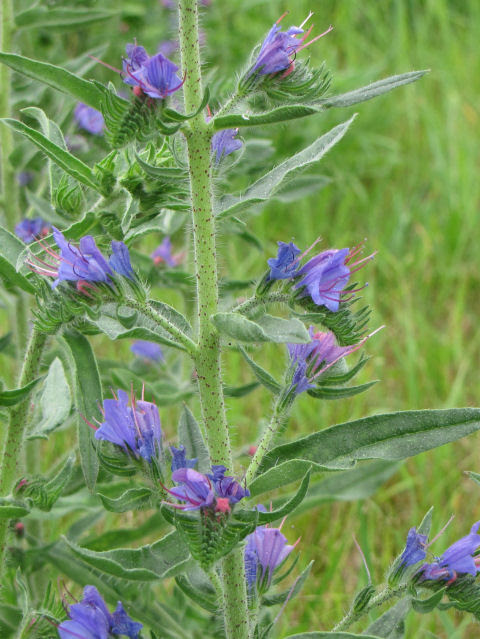 I love the name of the plant too! Bugloss is such a funny word. It means "ox tongue" in Greek. The name was given to the plant because the whole plant is rough and hairy, and the leaves are long and oval. So someone a long time ago though that it felt like the rough tongue of an ox. And an infusion of the plant was supposedly good for purging poisons from the body, such as snake venom. Thus the "viper" part of the name.

So from a distance the stalks look like a drift of blue. But the very best is the closeup. 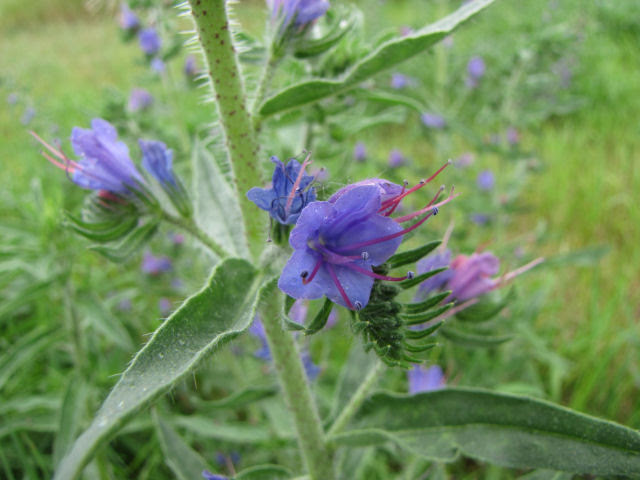 I just love how each flower starts out with pinkish edges and then opens to that perfectly clear blue. And aren't the stamens just amazing? The flowers last a long time, often two weeks or more.

You might notice that the pictures are clickable. From now on, with at least some of my pics then will be able to be clicked to open a larger version. The bad news is that they will sometimes also open an ad window. But I'm trying out this image service. Let me know if it's too obnoxious, but I wanted to be able to let people open larger pictures and I can't keep dumping all the pictures for four blogs on my server space.

It really is a lovely flower isn't it??! Cool. I don't think I've seen it around here.

Hey, the Dork Off is in full swing. So far, you seem to be a favorite.

Whoa, your new layout (background?) sure caught my attention. Looks good, and so do your Blueweed pics!

We have a flower like this in the spring, here in Cyprus. The heads are not as large as the ones you have shown. I love the blue, and what a clever background you have made.

You beat me to it. I've been seeing them bloom for a couple weeks now. Around here they like the rocky road cuts and areas with very poor soils.

I saw them in bloom all through the Adirondacks when I drove south to LI. They seemed to stop at Albany - I never noticed a one once I got south of there - and you know they are easy to spot even driving at 55 MPH or better :)

Your new layout just look like a colorful snake in macro...with its shown in the flower.

the flower looks very similar to our phacelias here which can set a field all blue. i love your new background, wonder how you did it as i had been playing with my background with no success :(

wow,obviously you love the outdoors.congrats also for winning on the contest at Trader's Hub. I'm sending you 2k EC credits in a few. cheers!

Hi Lin- Wow, I would think it would grow near you. Look in vacant lots - it likes poor soil. Thanks for the dork board!

Hi Glynis- It has some relatives, and came from your side of the pond originally anyway.

Wise One- Interesting. We had them in the Finger Lakes.

rainfield and betchai- I love playing with my graphics program to make fun things like this background. I just play with the various effects, and then end up using seamless tiling to make it into a background. But yes, I really like this one too!

Femmepower- Thanks for coming by. I am stunned that I won! Thanks so much for your sponsorship.

oh!! I have missed out a keyword in my comment.
Your new layout just look like a colorful snake in macro...with its tongue shown in the flower.

The flowers are beautiful. The larger pictures open up just fine. Your new background is great. I love the tiles.

Hi Fishhawk- nice to see you here! I agree that this background is really catchy!

rainfield- oh! I like that scales with the stamens for a tongue- great imaginative thinking!

Hi Ratty- thanks so much!

I just saw some yellow wild flowers growing along the side of my garage wall, and am paying closer attention to it now..

Hi Icy- I'll be looking for those yellow flowers! Love your pictures.