I Never Would Have Seen These If... 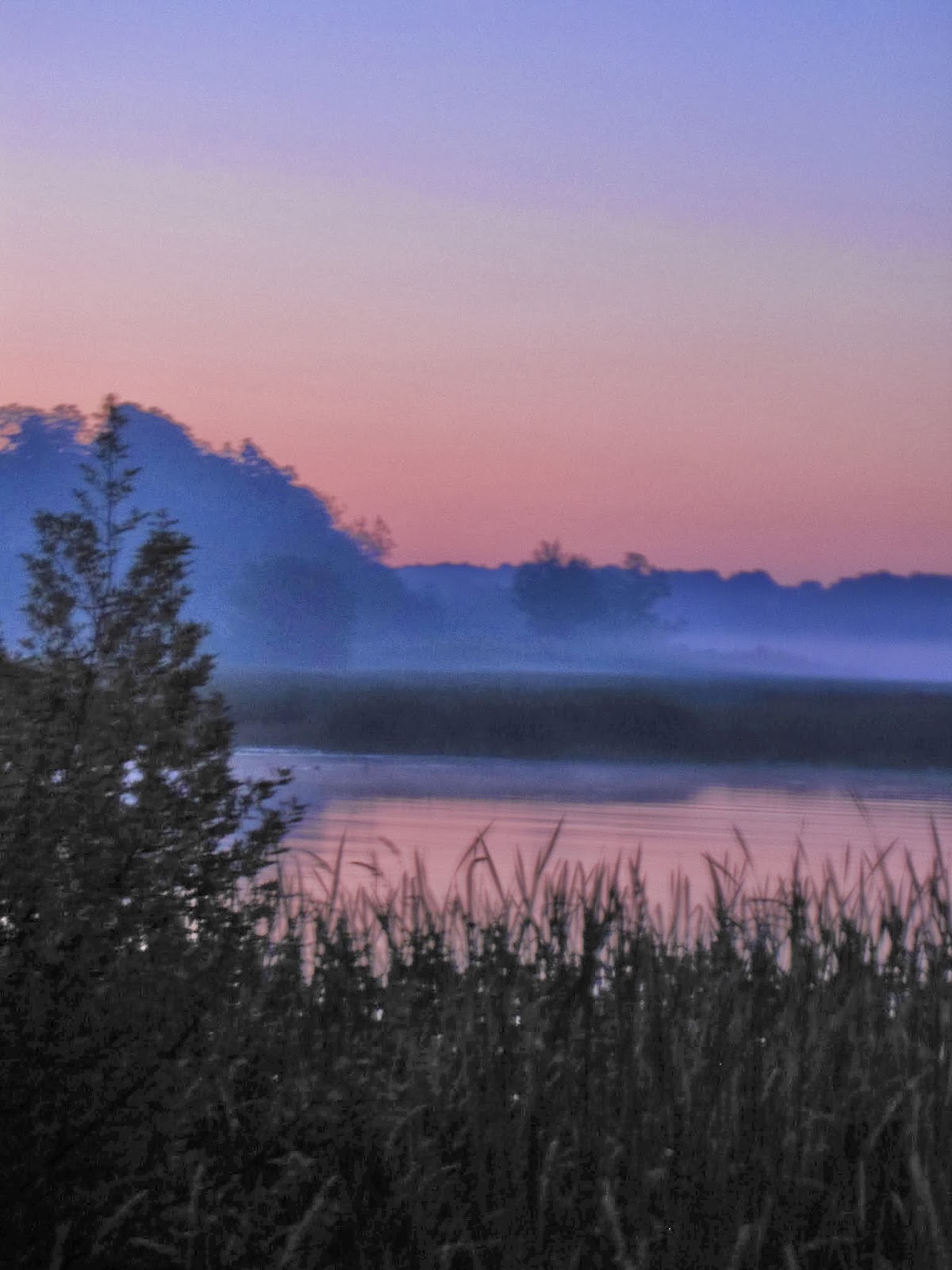 ...I hadn't had to do the paper route. Here are some of the best images from these early mornings. Om is home, the job is his again, and I won't really miss it a bit!
Although I started in the dark each day, the papers come late enough that the sun rises while I'm doing the route. Regular readers know that I'm not great with morning, so a nice sunrise is definitely a perk of the paper route. This is taken across the Pentwater River. 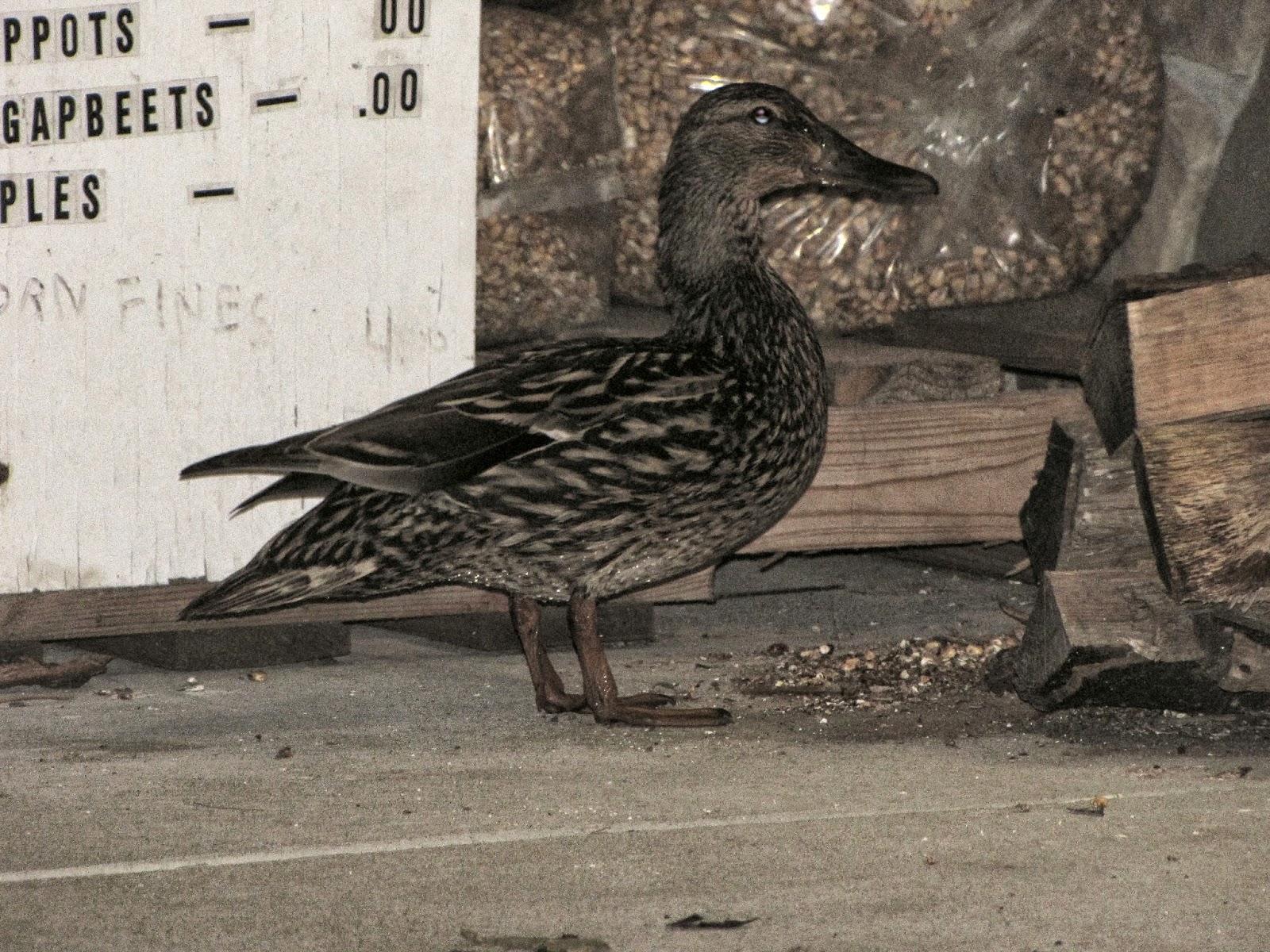 There was actually a pair of mallard ducks sneaking around the corner of a convenience store. The attraction was a broken bag of corn- see some of it loose near the female's feet. She was enjoying a good snack. Her mate wanted to join in, but a large truck pulled in just then and he flew away in fright. She followed him in a minute as I pulled out. 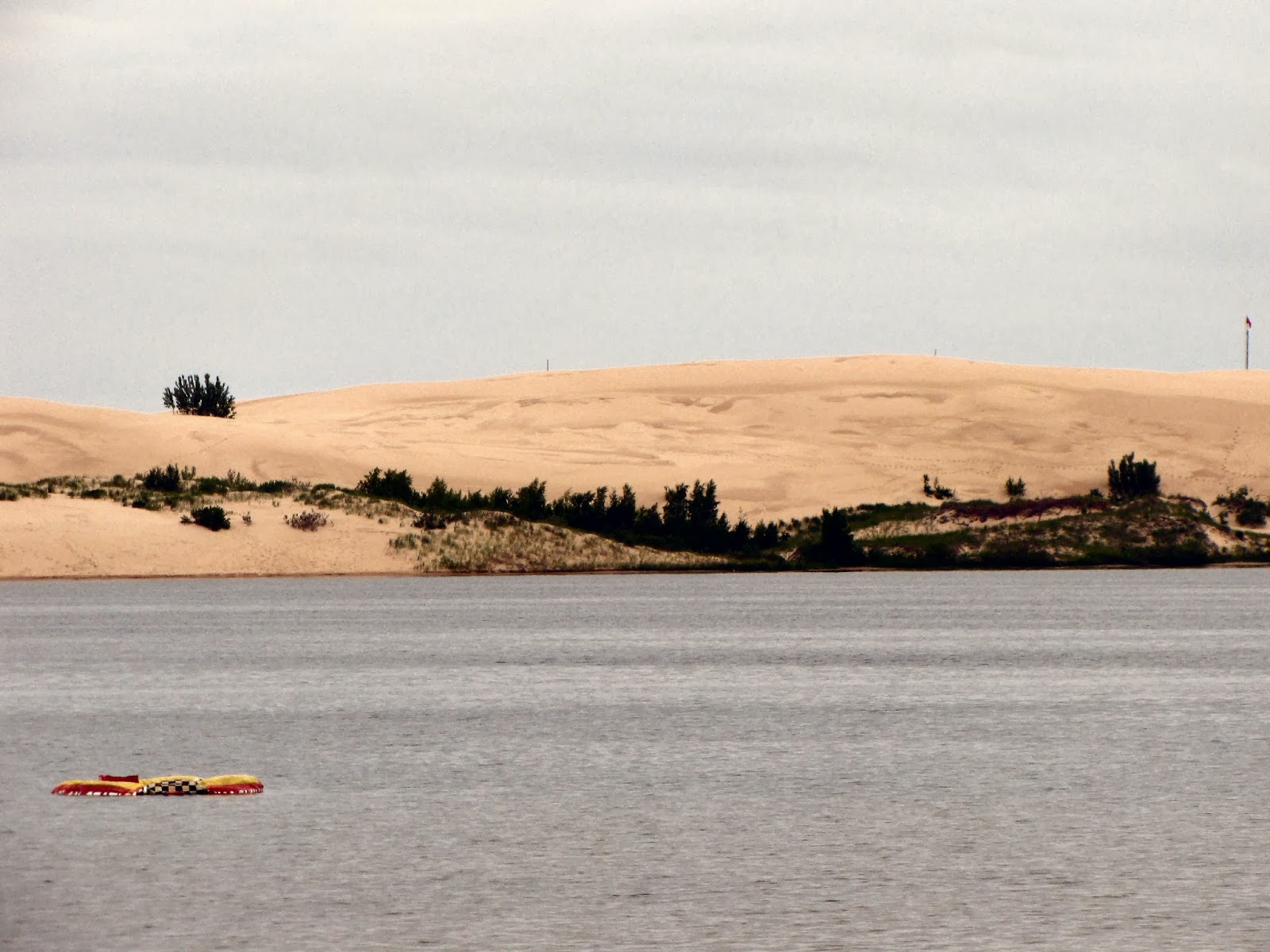 At the very end of the route is the whole Silver Lake resort area. These open dunes have been pretty much given over to the motor sport crowd for decades. I guess if that population has to be served recreationally, it's best to keep it in one area. But the dunes sure are pretty in the morning sun. 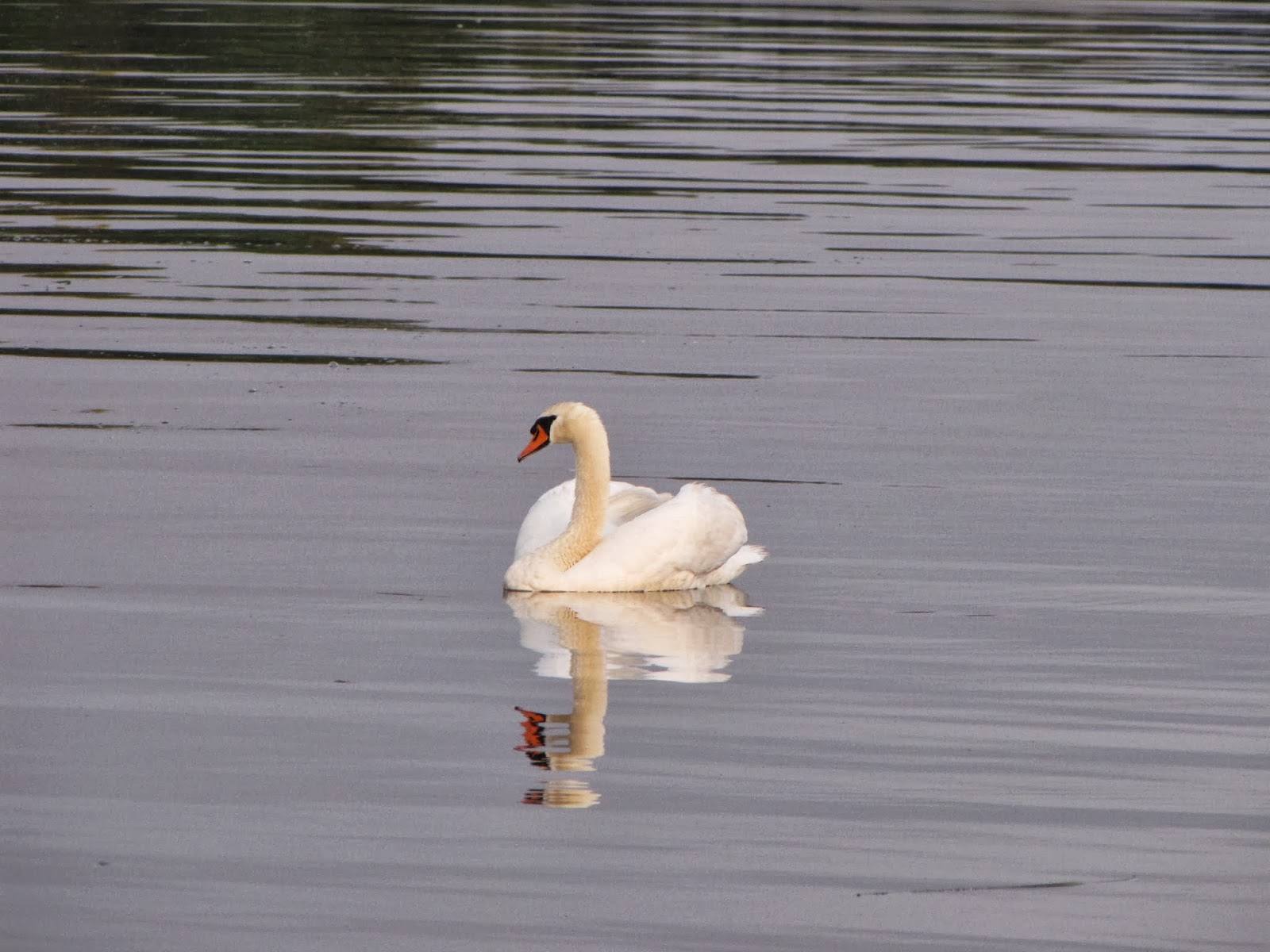 I caught this swan showing off. The rest of the family was nearby, but I couldn't get a good picture of them. Interestingly, the cygnets were the usual brown "ugly duckling" color, which makes me totally curious about those fluffy swan babies I saw in Mackinac City 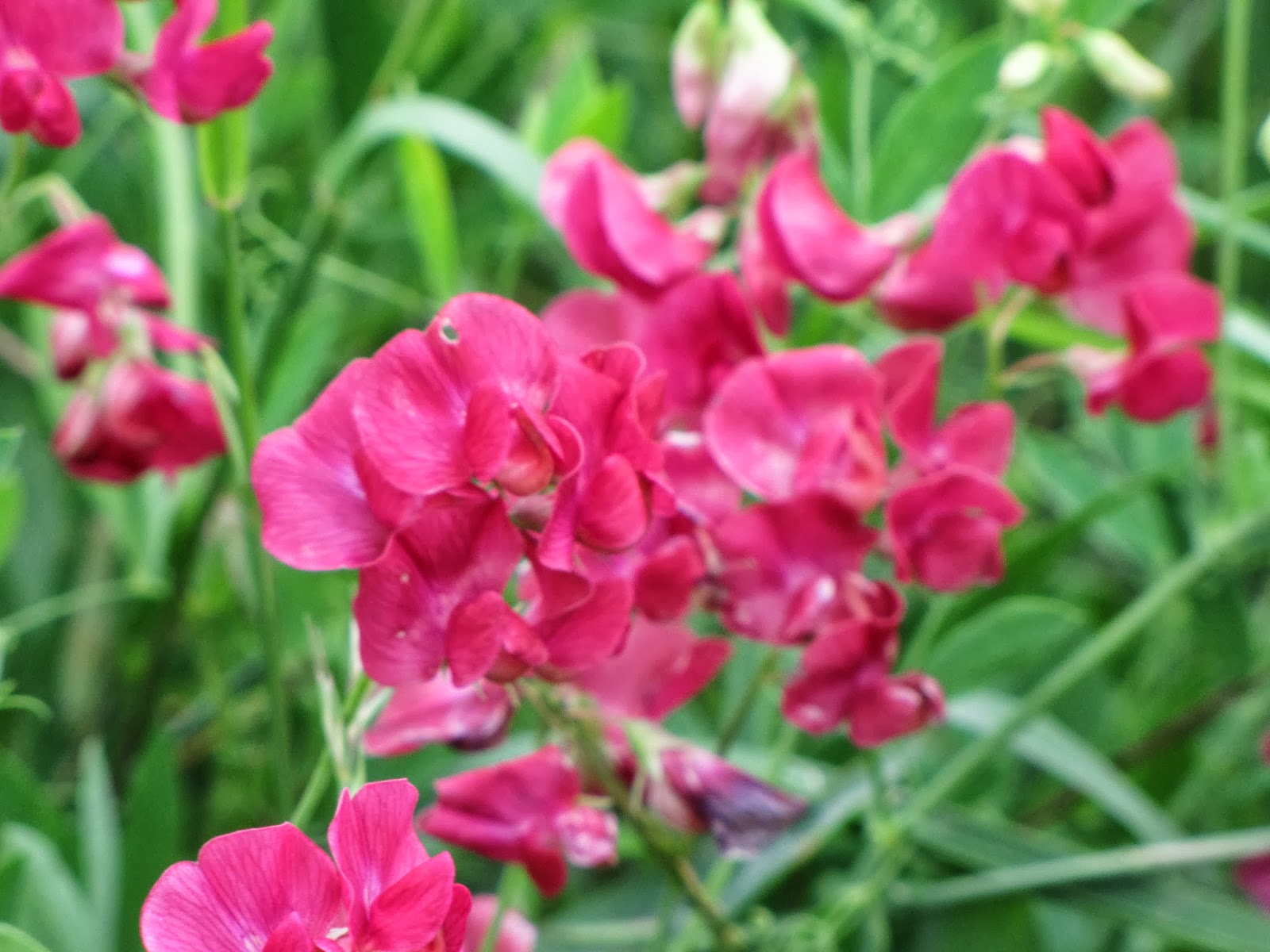 Finally, here is some sweet pea that I actually stopped on the freeway to look at. This time of year the roadsides here are covered with this plant. It's not native, actually a garden escape from colonial gardens. But this patch caught my eye because the color is much deeper than it usually is here. A much more typical color is ordinary pink, fading to pale pink and rarely white.

See Fluffy Treats on an Urban Trail for the cygnets
See Paper Bag with Fish- at the end are a couple of pix from one February morning of the paper route
Posted by Sharkbytes at 10:47 PM

your pictures really encourages everyone that it really pays to wake up early :) i so love the sunrise, the dunes, the swan, okay, love them all :)

I love the swan and the morning sunrise photos. I had a paper route when I was a kid. BUT I never had scenery like THAT!

I'm almost never a morning person either. Circumstances have changed for me lately though, so I'm usually up very early with extra time on my hands. My parks don't open til full daylight though. Your pictures show some of the best benefits to being up early. They even show that your paper route wasn't all bad after all.

I am so glad you got something out of your early rise!

What amazing things I miss when I don't get up early! Some lovely shots.

I have seen peacefulness in your pictures. So nicely taken.

Hi
Thanks for the info on my blog. It shouldn't have any popups. And I thought I stopped anything from rolling.
Are you using IE for a browser?
Thanks Again

How beautiful! I love the swan and the sun rise best..They gave me such a peaceful feeling!

You captured the beauty in nature very well. You have wonderful scenery on your route.

Betchai- You are very kind! I know, it's so pretty, but I just have to be beaten into early mornings.

Julia- I suspect most paper routes are more urban. This motor route is really spread out, and we do live in a beautiful area

Hi Ratty- Well, that is supposed to be the purpose of this blog- to find good things even when the general feeling of the day wasn't so great!

Glynis & Lizzie! You sound like you are generally on my biorhythm! Are all authors night people?

rainfield- Yes, there really is peace in that sunrise picture, isn't there. I think it's my favorite.

Hi Grampy- I will send you a PM

Icy- Thanks for stopping by. Your pictures are beautiful! I'm trying to get the camera to focus where I want it to.

Maria- Yes, we are really blessed to live in a very beautiful area of the world.