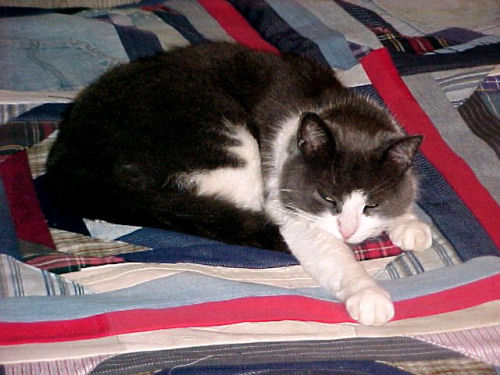 Today, with mixed feelings, we said goodbye to our V-8 Kitty. She was 19 years old and really in poor condition. Up until the last week she did not seem to be in any particular distress, but has gone quickly downhill.

She came to us as a stray in 1990, a year that was particularly difficult in our lives. We've never been cat people, but the very tiny kitten took a shine to Om, and so she quickly became his. In 1992 I went off to grad school for a few years, so V-8 and Om had lots of time together. 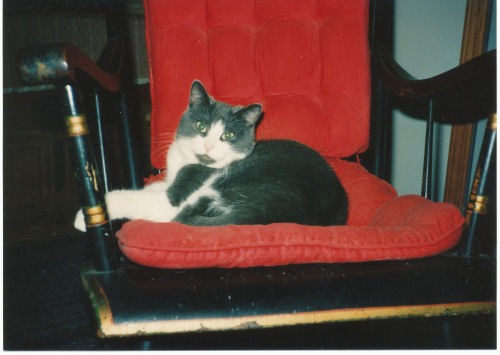 She was a funny kitten; her favorite place to sleep that first summer was in a small sink. However, the picture of her in the sink may be lost for good.

She has been slowly losing her mind for the past few years. For a while, she returned to her childhood love- sleeping in a sink. This time it was the kitchen sink, which wasn't too handy, but since she changed favorite locations fairly often we just lived with it.

She was never an affectionate cat. She was a great mouser, and very loyal and territorial, chasing much larger cats off our property. She was actually a fairly small cat. She did not like to be picked up, and did not come to seek out a warm lap to sleep in.

However, in the past couple of years she actually changed, and became a cat who sometimes liked to snuggle. Here is the last decent picture of her with Om. She came to him and wanted to sleep in his lap. You can see how he felt about that! 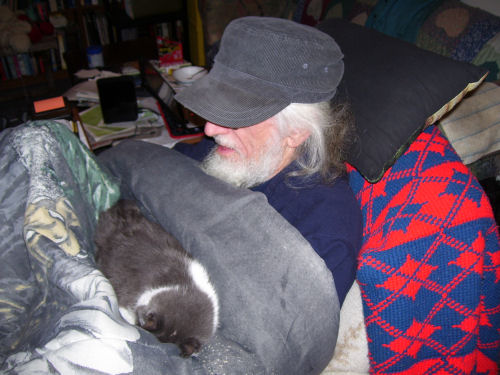 Her passing is certainly not unexpected, and she's much better off. She crawled as close as she could get to her favorite hiding place and died sometime between 3 am and 9 am. In some ways it is hard to be sad. Yet, in other ways, it's really the final end of an era. Our lives changed forever in 1990, and V-8 was very much a part of all of those swift changes. It's like she was the last thread of connection to all the events of that year. Too early to be able to process all of this. Hubby is sad... it's the first animal that he ever felt was his.

And I can't find the picture of V-8's memorial rock either. 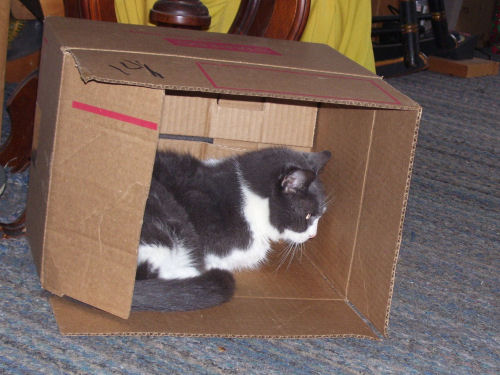 See Looking for Love
See Where Does an 18-Year-Old Kitty Sleep
Posted by Sharkbytes at 5:53 PM

This is the hardest time with our pets. I did think heavily during that night, luckily he finally got through.

I'm so sorry for your loss. It does sound like V-8 had a long, happy life with your family. This post is a great tribute to her memory. Love those pics.

Cats have a strange way of getting under your skin even if you arent really fond of them to begin with. Sorry to hear she passed away but I hope another finds you soon too.

I'm sorry to hear this, and share your sadness with you..

Awww... How lucky you two and V-8 were to have each other! Sometimes the hardest thing to do is the best thing for those we love.

19 years with her is such a blessing!

What a fabulous post! Although always a sad thing when a pet leaves us, it's what they've left behind that we can keep with us forever - sounds like you have some great memories of V-8 and some great photos as well. A wonderful way to remember her even though it's sad right now she's in your hearts forever and it sounds like she touched you both in her special way. Thank you for sharing this special tribute to her.

Sorry to hear about your loss. Sounds like you have lots of mermories.

I am so sorry for your loss of V8... Lol I cant help but laugh just saying V8 because it reminds me of the TOMATO DRINK or a V8 Engine Lol

May she rest in peace, and is no longer suffering!

Ah, sharky, I'm sorry you lost your V-8. Although she may not have been very cuddly or affectionate, she will be sorely missed, I'm sure. Those are the kitties that you swear you see out of the corner of your eye and then you realize she is gone. Ugh. Such a sad feeling. Just know that she is at the rainbow bridge waiting for you.

Hugs, pally. Grace, Hobbes, and I are sending love and hugs to comfort you in this difficult time.

So sorry. Cats are real people in our lives, and you will miss her.

This makes me sad too. I love the animals we call pets the most. The best thing to remember is that you gave her a good life. That's what I still have to keep reminding myself after my last dog died. She lived a happy life.

Oh what a happy face Om had, the joy V-8 brought you both. You rushed for you camera and captured a magical moment.
I am so sorry you lost your little friend.

I'm sorry V-8 had to go to the Rainbow Bridge. My sympathies and soft purrs to you.

Look back over the good years and do remember that after passing comes Kitty heaven.

I'm sorry for Your Loss, V8 sounds like she was a entertaining cat. The pictures of her in the sink are so endearing.

What a beautiful tribute to your V8. So sorry to hear of her passing. Hope she is having a wonderul time time in kitty heavenn.

First of all, let me thank all of your who have left well-wishes!

rainfield- this must be hard since you are watching a pet suffer too. I don't know the details, but hope your dog didn't have a bad accident, and will be all right.

Spinning- V-8 deserved a nice tribute. She has been loyal. Glad you liked it.

Julia- aren't you the one who told the story of Lucky the kitty on your blog? I think that was the post where I found you. I really laughed! You have a gift of making others laugh at the everyday.

Icy- Funny how posts about lost pets seem to touch so many people.

Daily Cute- Wow, I am honored to have you comment. I love your blog, and know that you must love animals too.

Hi J- thanks for stopping by. Yes, in her quiet, aloof way she still managed to be special.

Hi NCT- I wonder if anyone ever had a "trail cat?" I know a lady in Ann Arbor who used to take her cat for walks...

Hi Christopher- Oh, I sort of forgot to explain in the post that she was named V-8 by our youngest son who thought her purring was so loud that it was like an engine.

Lin, Grace, Hobbes- Thanks, pals! Yes, last night I almost stepped on her tail... it was a piece of bicycle inner tube.

Ratty- we just know we will outlive most of our pets and yet some of us can't seem to live without them. The happiness as they pass through is too special to forgo.

Glynis- Yes, Om has always been blindsided by his attachment to V-8. He never had pets as a child, and didn't expect to feel so deeply about an animal.

Oh Daisy-- that is special coming from you. Say hi to Harley for me. Hey, now V-8 can visit your blog every day... she won't need no stinkin' computer!

Grampy- yes, we are enjoying the memories of the good parts.

Hi Kelly- I tried to catch some of the endearing moments on film!

I am so sorry for your loss. I know V-8 kitty is in a wonderful place and playing with a bunch of new fur buddies. My heart goes out to you all.

Awwww..I'm so sorry for your loss. My husband knows just how your hubby feels. When our little dog passed away, it too was the only pet that he ever really felt was "his." He still misses that dog!

I truly believe that your little kitty is at peace now. Older cats do get more affectionate; they start to realize that we can keep them safe and warm, and they reciprocate all the love that we gave them in earlier years.

As the "mom" of a 15-year-old dog, I feel for your loss and understand.

RIP V-8. Sorry for your loss. V-8 will be waiting for you at the Rainbow Bridge. Many blessings to you all.

You wrote a beautiful, touching eulogy. What a marvelous cat you had!

I am sorry to hear about your recent loss.Though it is not unexpected, but it is saddening to lose a pet who has been with us for years and touched us in so many ways. I love your story for her, and the picture of her in the sink and with your husband.

Hope you all well.

My condolences to you for losing a long time friend. They DO become family, especially after so many years. She's gone on to the Rainbow Bridge, and my thoughts are with you.

It is never the person who chooses the cat.

It is the cat who chooses the person.

I have seen this truth over and over again.

Hi Jodi- I hope she has lots of fur buddies!

A. Marie- I'm sure she wouldn't have wanted to be typical of an aging cat! But it was kinda nice to be appreciated.

Patricia- yes, your pooch is getting up there. It's always so difficult. Best...

Hi Split Rock- I know you care greatly for your animals too!

Rebecca- Each animal that comes into our lives is special in its own way, isn't it?

Hi Betchai- Well, she made it easy for me with those funny sink episodes!

WillOaks- yes, but who will catch our mice!!??

Mom- Yup, she really did make that choice- she was such a tiny kitten and she cozied up to hubby right away.

Knowing my brother like I do I know this must be very hard. I wish I could do or say something to make it hurt less but I can't. For the first time in my life I have a cat who is very attached to me and daily tries to comfort me in my own pain. I don't think I could cope if something should happen to him. He is truly a comfort so I know V-8 will be missed by you both as he was that for you - sent to you at just the right time.

V-8 is such a beautiful cat. You've created quite a wonderful tribute here for her. My condolences to you and your hubby my friend. Hugs ~ Mia aka Redamazon (from SR)

Red- Thanks so much for coming over and leaving a message! Your thoughts are appreciated.

What a lovely, lovely tribute to your V-8 kitty - thanks for sharing the link with me about your kitty - I know you know the pain of losing a furry friend too! May our kitties rest in peace and live on in our hearts.