Brown and Gray, but the Good Kind


You've heard me mention that the month(s) between winter and real spring are my least favorite of the year, with everything brown and gray. But today, I'm going out of my way to show you brown and gray, and not even great pictures, at that.

Brown first: this is a regular yearly visitor to my yard, the brown thrasher, Toxostoma rufum. The local bird guru lists it as an occasional visitor to the county, but I'm trying to convince him that I see them almost every year. 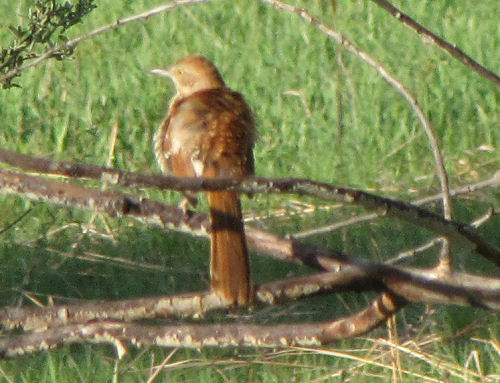 The brown thrasher is one of my personal favorites. It usually stays near the ground, fluttering from bush to bush, or walking across the lawn. They seem to particularly like the wooded cemetery. It's a little larger than a robin, with a much longer tail. 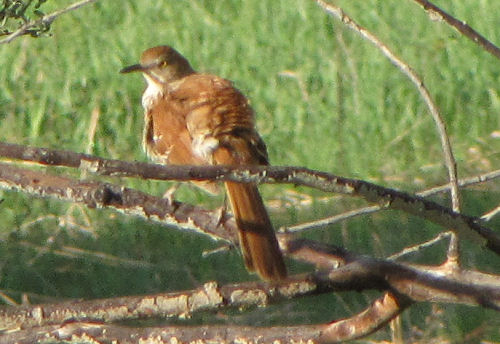 It was windy this morning- hence the ruffled feathers. You can also see its yellow eye.

The gray half of this duo showed up later in the morning back by the railroad tracks. I knew in an instant that it wasn't a regular visitor, and I zapped the pics off to Dave Dister, that bird guru I mentioned. I thought maybe it was a mockingbird. 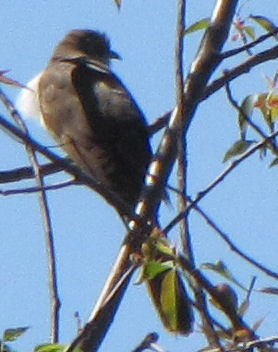 He answered me that it's a cuckoo, an uncommon visitor here. There are two possible kinds, but in the second picture you can see the red eye ring, which identifies it as the black-billed cuckoo Coccyzus erythropthalmus. 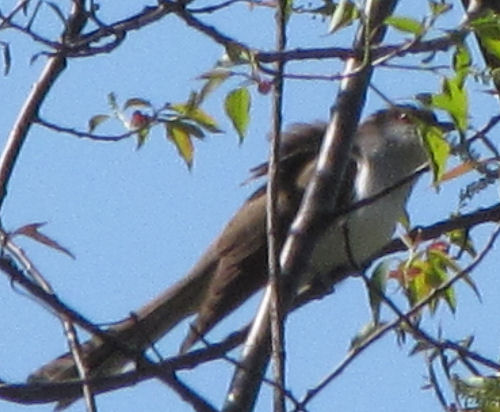 I've seen cuckoos in the south, but never here, and I think the ones I've seen were yellow-billed cuckoos. I didn't even think of it as a possibility. I'll keep my eyes open and see if I can spot it again.

Guess our southern feathered friends don't like the weather down here this spring...can't I blame them for getting away from the storms! Great photos, congrats.

Fabulous pictures, Joan. True, these birds are not so colorful as some but they have their own beauty and bits of color in unusual places.

I am so glad i found your site. Fantastic photos - thank you!!

Great captures! I'll have to be content to watch the robins and grackles walk across the yard.

It warms my heart to see that the Brown Thasher is a regular visitor in your yard! They are declining in numbers.
The Cuckoo is a very cool sighting. I have never seen one!

I had no idea that there were cuckoos in the United States. I learn so much by reading these blogs!

elegant birds. i am not good in identifying birds :(

Now that is a welcome brown and gray sight.
I've seen some cuckoos around here too but they weren't the bird kind...lol

Loretta- You must hear the cuckoos where you are. I think it was Tennessee where I saw so many, and you are just a little farther south

Carmen- I love the reddish brown of the thrasher. I think they are a very classy bird

Rez- Thanks for stopping by

vanilla- well- the grackles can be quite lovely and they put on a good show.

Jean- I see the thrasher almost every year, but I've never seen a cuckoo here before- only in the south

Emma- and I didn't realize that you are not in the US!

betchai- I am trying to get better.

Ann- oh, you are so right! We have those kind too.

Ratty- watch for a brown bird down low in the bushes at edges- a little bigger than a robin, with a long tail. You'll see the thrasher. Not so sure about the cuckoo.