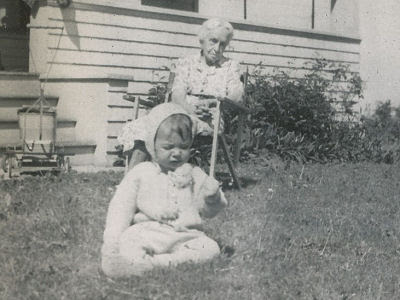 First place went to: John Lottery. He chose the ad for a year as his prize. Second place goes to: Ivy, and she chose the copy of my book.

Mabel watched her great-granddaughter playing in the grass. I'm going to be the one scrubbing the green out of those white clothes, she thought. Her mother is so wasteful that it makes me want to scream. She carefully kept her gaze on the child and pretended not to see her granddaughter's husband take a picture with his new camera. He was so proud of that contraption. She knew they thought she was an old fuddy-duddy, and she wondered what they would think if someone had taken pictures of her in her youth. They thought of her as Grandma, of course, not a wild suffragette who had spent many nights in jail. She had, in fact, been one of the first in her town to own a pair of rollerskates.

Suddenly, Mabel clapped her hands. "Time to get inside. The baby will catch cold if she's out here too long."

"Grandma!" Jane laughed and sent an appealing look to her husband. They were, Mabel thought, children and far too young to be married. "Grandma, it's healthy for her to be outside. You live in the last century, you know." She ran up and kissed Mabel's cheek. "We do love you, though, even if you forget that it's 1947." Jane knelt beside her grandmother. "The war's over, Grandma. I know you're not worried about Alice catching cold. You're worried about ruining her clothes with grass stains. But the war's over. Rationing's over. We're in a new era. Isn't that right, Mr. Scientist of mine?"

Arthur, to whom Mabel realized she had taken an instant dislike, shot her a wide, insincere smile. "She's right, Grandma. We're entering into a golden era. Nuclear energy. Unlimited cheap fuel - so cheap it's practically free. Our children will grow up with disposable clothing. Even disposable diapers! Alice will grow up without knowing a single want. Everything will be available to her, without work or effort."

CD, you can go to More About the Contest and choose any gift except the blog ad or my book. Be sure to send me your address!

Thanks! When I looked at the picture, I was thinking about the difference in expectations through recent generations. Mabel lived through two world wars, rationing and a lot of hard work. Her granddaughter, and her husband, are young and exuberant in the brand-new "nuclear age" that promised an amazing life for everyone. I expect older people like Mabel were less than optimistic and the whole idea of "disposable diapers" likely seemed as ridiculous as disposable clothing.

A thought provoking story and quite well written. Congratulations,Canadian Doomer.

another great story. Everyone really did good with this

A good story. I'm not so sure about unlimited cheap fuel though. :)

Carmen- glad you enjoyed it. That means a lot!

Grandma- Thanks for stopping by. When my other blogs are restored, I'll be buying some EC ads and noting you as a fav. Love your blog.

Ann- yes, there weren't any bad stories. Glad I did not have to be part of the selection group.

Noypi- thanks for coming by to read it!

Ratty- yeah... we seem to be going the wrong direction on that one.

Ratty - it's what people thought back in the 40s. They were harnessing nuclear as a force for good, and it was going to make everything wonderful.

Hoping for the early resolution of your blogs.

A little bit of OT but I just want to say to comfort you but don't know where to place it. Sorry.

CD- those were the idealistic days!

borris- Thanks, buddy! Now if I can get EC to come around, all will be well again.