The third day of the hike was actually the most difficult. We knew it was going to be one mile farther (13 miles), but that wasn't really the issue. The trail was continually hilly, up and down, over and over again. The surfaces were also very uneven with many rocks and roots. We did fine, but were more than ready to get in the cars at the end of the day!

One of the best parts of climbing hills is that there is often a view from the top. As you all know by now, I just love the hills of New York. 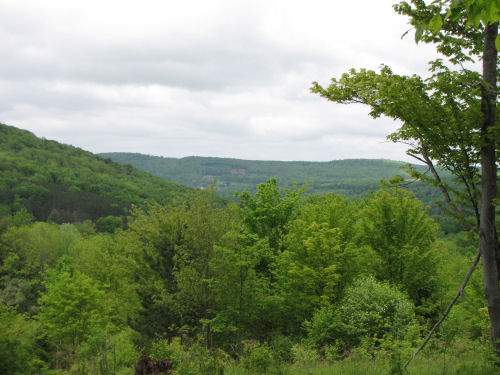 In the afternoon we climbed for most of an hour along one creek. We made slow progress there. 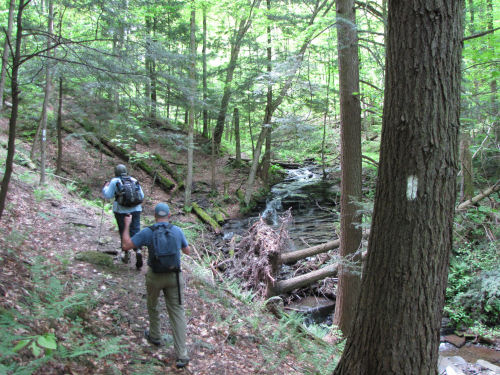 The problem wasn't so much the hill, although it was certainly long, but that we kept stopping to look at all the little waterfalls! 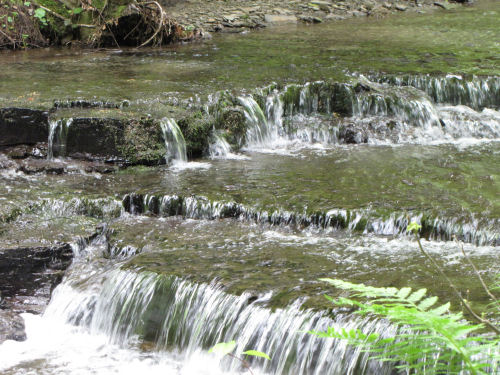 We kept hunting for a good place to stop for lunch, and kept saying, "just a little farther." This was partly because we suddenly found ourselves in serious mosquito territory. We even got out the head nets.

As it turned out, we stopped to eat at Jackson Pond (where we had camped), at about two o'clock. We had taken our tent down that morning, but that was ok. It was still a great place to stop and see the light on the water from a different angle. 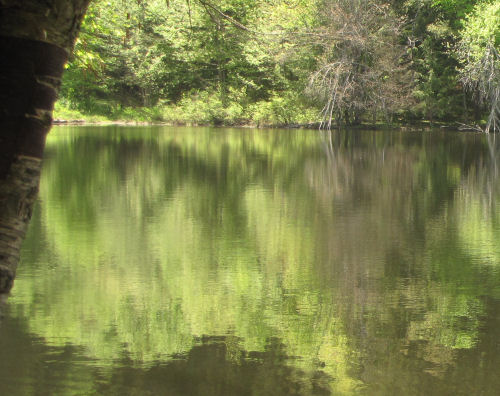 We reached the cars at North Pharsalia at 4:30. It only took a short time to retrieve the other car from Bucks Brook. Next stop- Larry's house for a great spaghetti dinner!

Total miles on the Finger Lakes Trail east of the North Country Trail: 31. How many to go? I'm not sure! I have to figure that out, but it's in the range of a couple hundred. The FLT ends in the Catskills, not too far from where Marie lives. Just a little stroll from my house in Michigan!

Great pics, I want to live in NY someday, I'll have to visit here!

Shark, these are fabulous pictures. That lake, with the reflections, is especially impressive. I wouldn't have relished being munched on by mosquitoes, though.

I notice people using hiking poles. I bought some recently. Can't get on with them. To much of an upper body workout for me. I've gone back to my trusty thumbstick.

The last picture resembles the one I always find at Cerok Tokun.

THAT was an awesome 3-day hike! 31 miles in that terrain, heck, in any terrain, is pretty damn good!!! :-)
What beautiful views! Thanks for sharing!

so beautiful scenery, the reward of hiking and seeking peacefulness in nature. i too would be slowed down with scenery like that.

Fred- check out anywhere on the Finger Lakes Trail- it's great!

Carmen- we cover up and put on repellant... they weren't anything compared to some of the really bad skeeter episodes.

John- that's the point... to take some of the stress off the knees.

Chuck- it really is!

Carol- they were everywhere! There has been so much rain that every little valley had a running brook

Ann- I really love the geology there.

Ferd- Well, we usually average 12-13 miles a day when dayhiking (slackpacking), and I did, but only got to count 6 of them the day I did both directions

betchai- it's very different from the huge, raw vistas of the west, but it has a very seductive beauty

What gorgeous spots! Thanks for sharing them. :)

Ivy- It's one of my joys to share beautiful spots with you!