Things Named for What They're Not


Just because these are left over, and I want to show you, I'm going to make jokes about their names. They are both named for things they look like, but have no relationship with.

First is the common field horsetail, Equisetum arvense. Actually many of the plants in this genus make it easy to understand the name. Most of the species grow fluffy, thin leaves that grow in whorls around the stem, and the whole thing ends up looking like a horse' tail. But this is the fertile stalk of this species, and it looks more like asparagus. 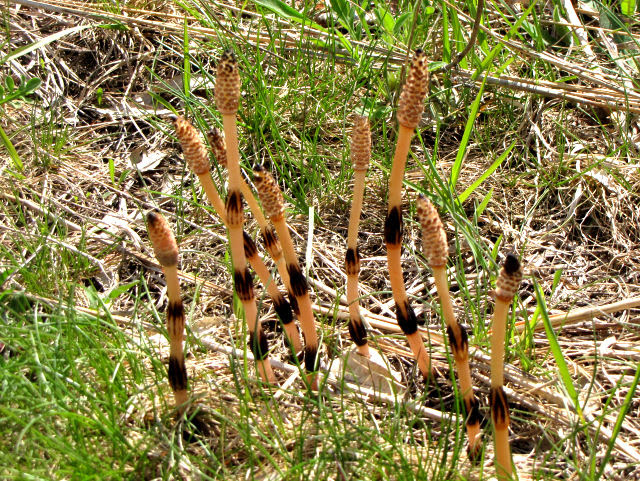 And, I'm going to bring you the muskrat again, which is not a rat at all. It's a rodent, but that's as far as the relationship goes. I suppose it looks like a big rat, with that bare tail. But, I kept this a secret... I made a video of the muskrat munching.

The plants are cute.

As cute as the mushrooms.

that is a very cool looking plant. I don't believe I've ever seen one of those. Fun watching the muskrat with the munchies :) He sure did seem to be enjoying his little snack

rainfield- I found some mushrooms too, but they are plain brown, not high on the cuteness scale.

Ann- horsetails grow almost anywhere, but people tend to not notice them.

The horsetail is very interesting. Is it really that color? It's never green?

I like watching rodents eat. For some reason, I find it very, very cute, lol.

The horsetails are quite common around here, especially on wasteland and the railway embankment.

I really enjoyed the muskrat video! And I looked at another of the videos listed which was really nice - some great shots there - a lovely relaxing break in my day!

Ivy- It really is that color. This species has separate fertile and sterile stalks. The sterile stalks come up later, and those will be green.

John- That's exactly where this species likes to grow.

Carmen- critters are quite captivating, always!