We got a lot of rain in a short amount of time, and lots of thunder and lightning, but all is well. Just north of us they had very large hail! Everything looks green and fresh! That's the word about the storms. 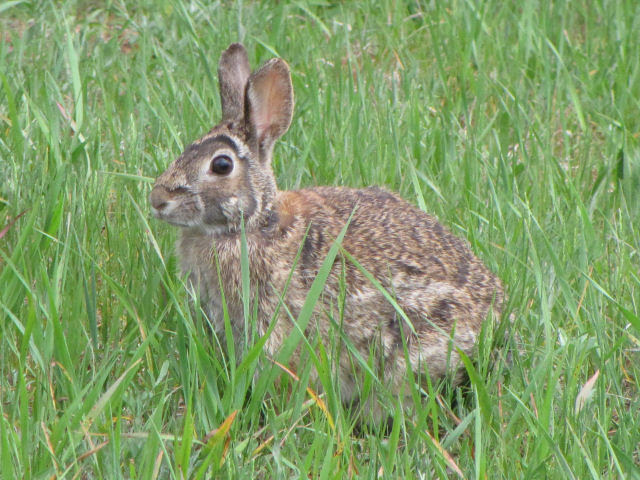 The fur was visiting my lawn at breakfast time. This is an eastern cottontail rabbit, Sylvilagus floridanus, the only rabbit we really have here. This is a very large one, wise enough to have survived winters and roads- probably the one who left many of the tracks to my compost bucket this winter. 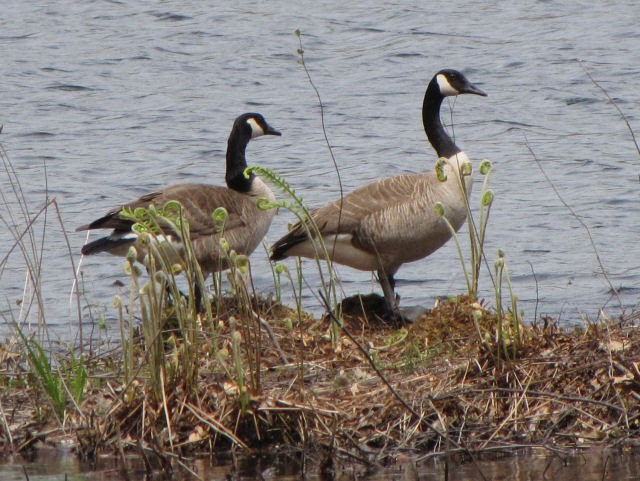 I had just a few work assignments to do today. The first one took me to Round Lake in Oceana County. (Probably every county in Michigan has a "round lake.") This one also had a pair of Canada geese, Branta canadensis. I was going to leave those for Ratty, but when I looked at the picture and saw the unfurling cinnamon fern too, I decided it was a nice picture. Now you have the feathers. 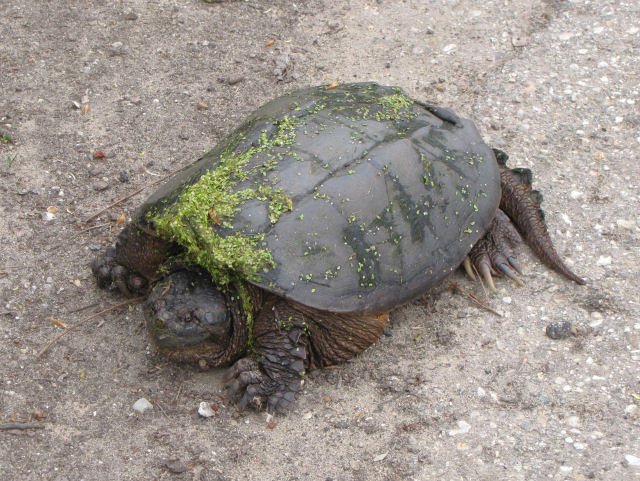 But, here's the best viewing of the day! I next went to School Section Lake and found this fine snapping turtle, Chelydra serpentina. I have seen bigger ones, but not very often! This is one of those creatures that seems to be left over from the age of the dinosaurs. And, believe me, you don't want to mess with these guys. He could take off a finger or two with no problem. They won't "strike," but you don't want to pick one up. I've picked up babies which were about two inches, but anything with about a six-inch or larger shell, just look but don't touch!

If you click the picture you can access the other pictures from the encounter, including one where it was walking across the road, not hunkered down. Aren't the flabby spikes on its tail interesting? It looks like a real-life dragon! It must have just come out of the lake because it's covered with fresh duckweed.

I love it when a day brings so much wildlife my way!

Well, it sounds interesting, Joan...but don't sit there and get sizzled!!!

Great shots of all three critters!! I caught some turtles in a beaver pond a few days ago and have been seeing lots of geese and ducks. I love this time of year for photography!

lots of good sightings for you. That snapping turtle does look like something from the prehistoric ages. I wonder how puff the magic dragon got himself inside that shell :)

wow, you have lots of wonderful images there Sharkbytes, and the up close picture of the turrle, those eyes are just awesomely captured.thanks for sharing your photo organizer and photo index, i am actually currently looking for a photo site to organize all my pics too, thanks to you.

Good photos ... but is something wrong with the rabbit? Although it is bright-eyed and perky eared it looks as though its coat is falling off its face. Perhaps it is an old bunny .. was it hopping all right?
We have loads of Canada geese over here too ... and like yours they are busy pairing up - they are marvellously friendly.
I do love the turtle .. what a delightful tail he's displaying - looks positively prehistoric.

Ann- Puff was much more friendly than these guys!

betchai- The turtle was awesome. I am building my own photo site... it's hard to get people to visit, but I figure I need a lot more pictures

vanilla- I'll get spoiled and expect every day to be that way.

Polly- I do think she/he's a senior citizen. Very large for a cottontail. Could be shedding the winter coat, too.

I love spring when we see all the little creatures again! LOVE the turtle shot--he sure is magnificent!

Lin- he was awesome- I'm glad I saw him instead of someone who wanted to make soup.

We have lots of rabbits in our neighborhood, living under trailer homes. They don't bother my vegetables garden as much as squirrels do.

Glad to see some green in your pics! :-)

Each picture features one of my favorite kinds of animals. I thought the turtle looked a bit dinosaurish too.