It's In the Mail and Other Lies


Have you ever told someone "it's in the mail," when it wasn't, quite? I'm doing it right now, but I'll also tell you I'm lying. However, I do have 5 packages sitting by the door all ready to go out tomorrow. This is a major accomplishment for me. Next contest... maybe I'll just send PayPal!

So here's the rundown. Biggest box is a taillight for my car. A left taillight. Problem is... I ordered a right one. So after learning it didn't fit, they sent the right one, which was the right one, and a return authorization for the left one. Got that? Right.

Second thru fourth- The packages are all ready for Canadian Doomer, Ivy and Chuck, the winners from the April contest in addition to John Lottery who chose the blog ad.

Fifth- One more project finished... Loretta's shawl, and just in time for her birthday, which is Sunday. So, I figured you would want to see it. But you have to properly appreciate what I have done for you here. This is the first time I've had on a dress for about four years. I kept it on for about four minutes. All for YOU.

Maybe Loretta will model it with the dress it was made to be worn with. We can hope. 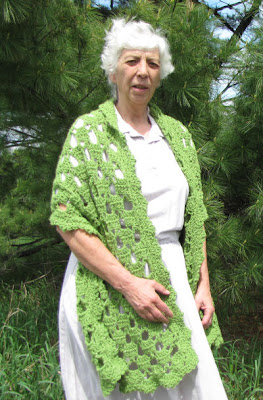 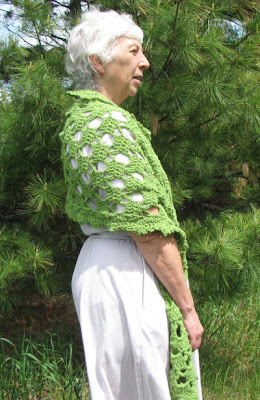 I leave tomorrow for New York. I'm giving the Saturday night program at the Spring Weekend of the Finger Lakes Trail Conference. After that, Marie and I will get to hike for two days, then I have to bug home. It's about the part-time job, you know. I have posts scheduled for the days I won't have internet access, but I'll probably miss visiting you for a few days.

Posted by Sharkbytes at 9:34 PM

It's beautiful! Can't wait to wear it with the dress...and I will make sure I get a photo! Have a great time in New York.

Have a super trip. Love the shawl! Are you sure you want to give it away?

The shawl is lovely. I like the little collar.

You look very nice in your dress and shawl.

Have a great trip to the Finger Lakes region. Been through that area many times--on the Thruway. Nice work on the shawl.

Love the color of the shawl..! I used to buy some for my sis and grandma but the color is an ethnic tribe color which they like most.

oh, that shawl is so beautiful Sharkbytes, the one who will get that prize is so lukcy. have a good hike and safe trip to NY

Ha, got you beat. I haven't worn a dress in 5 years, at least. Love the shawl though. That's a great color. Really pretty and I can see from the comments that Loretta likes it

Gorgeous shawl! We appreciate the dress wearing, lol. Hope you have a great time in NY!

I am honestly in no rush, so I'm not worried about whether or not it's in the mail. :) Enjoy your trip.

I am with you on the dress situation, but I could wear that gorgeous shawl forever!