This is really Thursday's post. It was Om's birthday and he wanted to go somewhere to take pictures. We went to the Lake Bluff Audubon property in Manistee. I have no idea what he was picturing, but if it was good, he'll probably put it on Facebook. 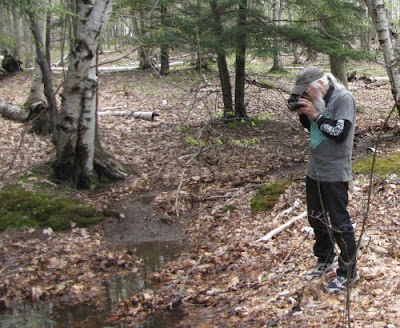 It must have been a good outing. We walked too little for me and too much for Om! I chose a place that's really good for wildflowers, but there just wasn't much happening yet. Last year's polypore fungus was trying to pretend that it's a flower. 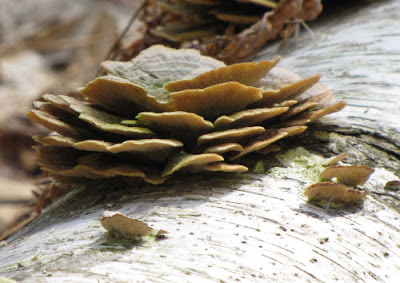 The ferns are starting to unfurl. I like that a lot. This is the Christmas Fern, which has dark shiny evergreen fronds. That makes the fiddleheads seem so odd to me, since they are the exact opposite- white and felty! 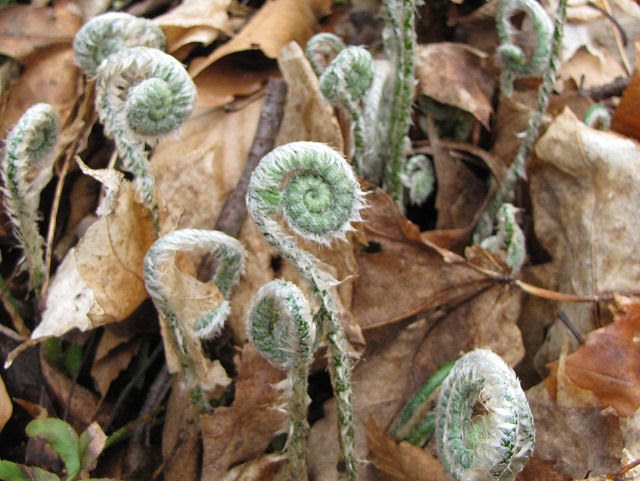 This was the brightest color of the day. This is the flower of the red maple. They aren't always quite this bright, but sometimes! 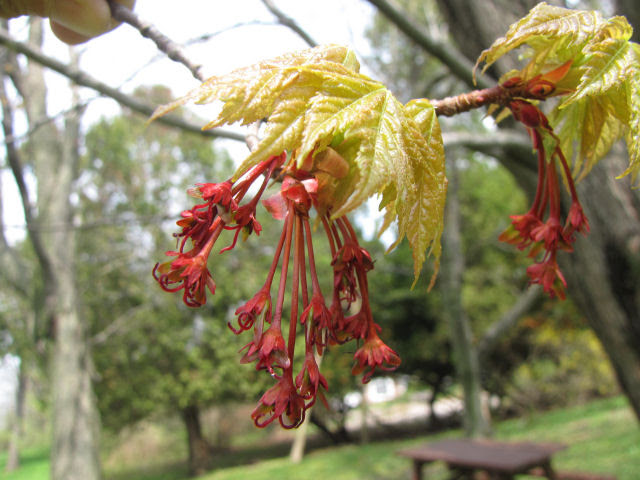 We ended the day with a short stroll along the bluff. Here's my best effort to capture the feeling of that. 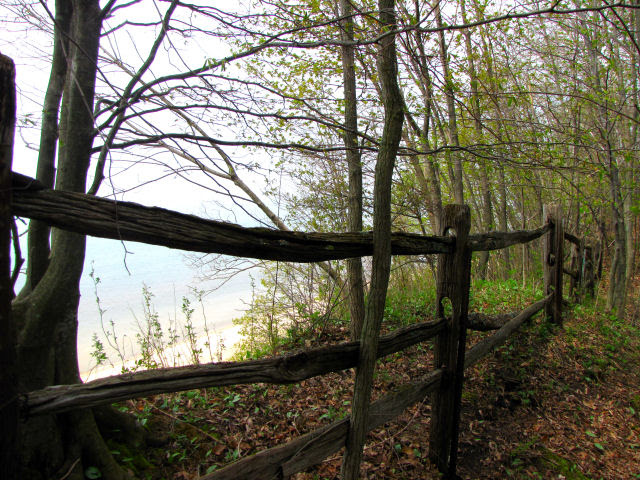 Om is really the photographer of the family, but we had a good time, and we've learned that we don't have to compare pictures and try to be "the best." We've agreed to do it again this summer, and we've even chosen where. I'll keep it a secret for now.

The fence is my favorite followed closely by the ferns emerging. We're turning brown so fast now...

It seems you had a good adventure. With a little compromise from you both, a lovely time was there for both of you.

Are these your photos or Om's? Do you post Om's photos? I'd like to see them too!

I'd like to see your version and his of the same area/object.

A late birthday greeting to Om! Love those unfurling ferns! And I love the atmosphere in that last photo. Great pics, Sharkbytes!

That sounds like the perfect way to celebrate a birthday. Wishing him a belated happy birthday.
Love your shots especially the last one

I really enjoyed this post. After strokes, I can't indulge in walks like this anymore, but you made me feel as if I'd taken one. Thanks.

Julia- does it get hot and dry where you are in the summer? That's a bummer

Emma- yeah, we manage it once in a while (compromise)

Lin- these are mine. He says he hasn't sorted his yet from the day, so I haven't even seen them. If he gets some he likes he'll probably put them on FB. Or not.

Ivy- It's nice to be able to really give a sense of what it's like around here.

Ann- thanks! Yes, we wanted to do something, but it needed to cost next to nothing.

Grandma- aw... I'm sorry you can't take walks, but I'm happy if I could make you feel like you'd been there.

Your Spring is just about to spring! Finally!

A belated birthday from me to Om, as well. It's nice that the two of you got out together for a little jaunt...I'm sure Maggie was along as well.

Ferd- I'm sure he appreciates the thought.

Carmen- ditto! Yes, Maggie got to go although she had to stay in the car for part of it- one section is not open to dogs.

Thanks for the beautiful photos !!!