Today, I'm going to show you a special place. It's where I went to look for wildflowers yesterday. I call it the Dragon's Backbone. You won't find it on any map, because I made up the name, and interestingly enough, it doesn't even show on topographic maps. Apparently it's too small of a feature to have been picked up on the surveys. 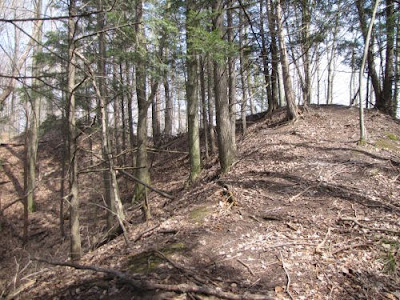 It begins at the top of the bluff above that backwater I keep talking about. I took these pictures when I was about halfway down to the river. I stopped at a place where the ridge makes a turn, and pointed the camera back up toward where I came down. 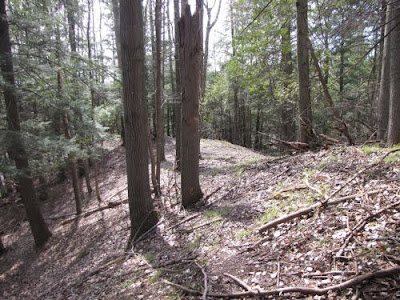 Then I turned around and took a picture looking down toward the water. The two pictures together are a little odd. The one looking down seems as if it should be at a different angle. It has to be some sort of optical illusion, but at least you can tell that one picture is up and one is down. 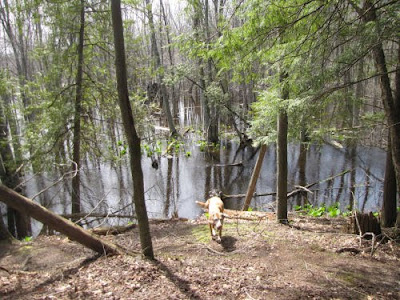 Continuing down toward the river, soon the end of the backbone is visible. Maggie is helping me to give you a sense of the scale. 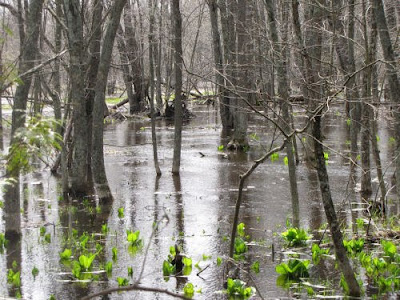 And at the very bottom, at least this week, another view of the Pere Marquette River. It's taken from the same place as the picture yesterday, just a different angle. At a lot of times of the year, this is only marshy, and one can walk along the foot of the bluff without getting wet at all.

I like to pretend that this place is all mine, but it gets lots of traffic from at least hunters. I don't know how many other people wander back there. Hope you think my dragon is friendly!

I love the mountains and it always have a special place in my heart but every time I saw a swamp, it always creep me out and think of something else in there.

The title relates to Feng Shui.

You have to find where are the head and tail.

This is crucial to determine the prosperity of this place.

Going down the dragon's back, okay I might handle that. But how ever would I get back up? ;-)

What a delightful piece of topography. I enjoyed the visit with you today.

Hi Joan,
I liked your interpretive tour of your dragon. I am sad here since the hills are already turning golden here. Another month and all the grasses will be done. Your're just starting there. Bye for now. :)

Pretty friendly dragon, walked down it's back and it didn't even breathe fire :) At least when no one else is around you can pretend that it's your own little world

sir rob- no mountains here! But we have plenty of WETLANDS

rainfield- clearly his head is at the top of the bluff, and the end of his tail drags in the water. What does it mean?

vanilla- this week we could take you out by boat!

Chuck- it makes me smile every time I go there. I would love to have you walk it with me for real.

Julia- what? you have brown summers in N Cal? that's not right.

Ann- I guess it's tail was steaming in the water.

So the dragon's backbone were just a hill or small than?

But still it creeps me out including the wetlands. Anything that I can't see the bottom.

borris- just a ridge of land that goes down to the river. The sides are steep, but only 30 feet high at the most.

Great photos…I felt like I was taking a walk right there with you!

That marshy area at the bottom of that dragon's back reminds me of southern US swamps. Pretty cool.

Book- thank you! That's the effect I'm trying to create.

John- There's a lot of that bottomland swamp along the PM at this time of year.