Dogs of My Life - Bonnie 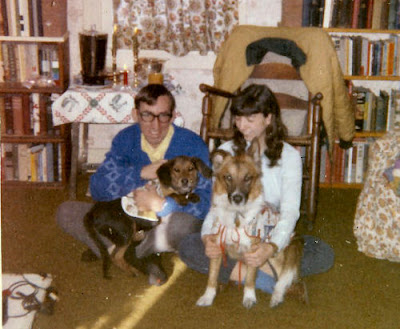 Sweet little Bonnie was only with us for a couple of years. It's very sad. I have to tell you that I'm a sucker for hounds. The problem is, of course, that they are very headstrong. For some reason we decided to get a second dog. We were trying to start a family without any luck, and decided in 1970 that we would be a family with pups for a while. You've already met Jeremiah. 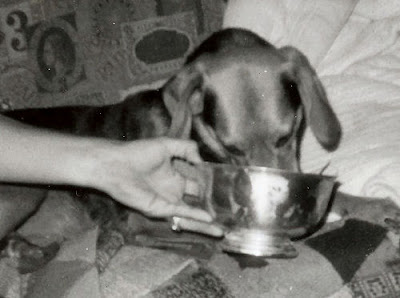 Bonnie Blanche was half coon hound, half beagle. She was the first female dog I'd ever owned, and she was just a sweet little cuddler. Soft hound-dog ears, and always ready for a little treat. 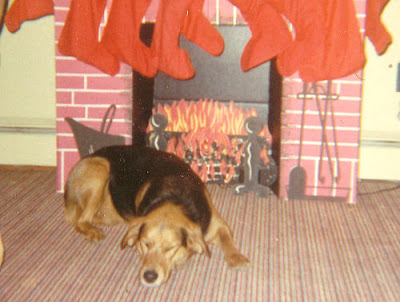 Isn't it strange that a dog will curl up and sleep in front of a cardboard fireplace? This picture is taken in a different house from the first picture. In December 1971 we moved just 3 miles to the property we are now on. There are so many stockings because Omer's parents came for Christmas, along with his "baby sister" Kathy (Lyghtekeeper- who died in August 2009- some of you may remember that). That leaves two stockings to account for- of course two of them were for Bonnie and Jeremiah. Pictures show that Loretta was here too, and maybe their brother came as well. 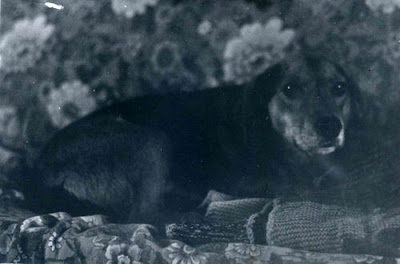 Dear little Bonnie was indeed part hound though. She had a tendency to roam sometimes. This is the last picture taken of her. She met her fate in the road the next summer. It's pretty appalling how many of my dogs died that way, but back then...people who lived in the country just did their best to train a dog about the dangers of the road, and then the dog was expected to take charge of its own destiny.

It's very sad, and I still feel guilty about Bonnie. She didn't die instantly, but crawled out of the road into the tall grass. We didn't find her until the next day. If we had found her right away, could she have been saved? We'll never know.

A nice little tribute and remembrance. I bet he was a wonderful dog!

He may be another new dog right now.

She had a lovely life with you. That is the important thing.

You gave her a good life while she was here and she gave you fond memories of your time together.

Oh, you took good care of her, pally. Sometimes nature just calls our little animal friends and they think with their noses and not their heads.

She sure was a cutie and you were blessed to have her for the time that you did.

P.S.--I LOVE that early shot of you and Om! You two are ADORABLE!

You remind me of my son, Alex, and his wife. As soon as they bought their house, they wee off to the county dog shelter to get a dog. Two months later, they went back to get a second dog to keep Taffy company!!

Poor Bonnie and poor you. You must have felt awful finding her in the
grass, injured.