I'm reading The Birth of the Nation by Arthur M. Schlesinger. The Colonial/Revolutionary period of American History fascinates me, and I seem to be on another reading jag of the time period.

But today, I'm focusing on one particular topic. I've been reminded of something I used to know, and learned several completely new things. The theme that binds them all together is "Conestoga." 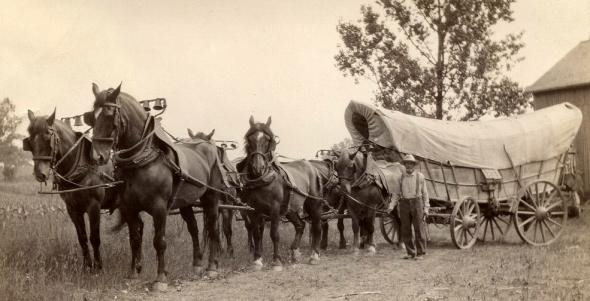 The wagon was purposely designed to not have a flat bed. The ends were higher than the middle, which helped stop loads from shifting on steep hills. They were the first wagons to be covered with canvas stretched over bent rods. When the canvas was soaked in linseed oil it was waterproof. The large wheel also helped to keep the wagon from being mired in deep mud. These wagons were built in different sizes, just like trucks are now. However, large ones could hold up to eight tons of goods. The earliest historic mention is in a diary from 1717, and they were (mostly) used until civilization spread across the Appalachian Mountains. They were usually drawn by six horses. Which brings us to the next point, and moves into things I'm learning for the first time.

A semi-breed of horses was developed just to pull these huge wagons. The Conestoga horse was a cross between Flemish stallions and mares from Virgina. The horses were large and powerful, up to 17 hands tall. They could haul the heavy wagons 10-15 miles a day, up to about 100 miles before needing a longer rest. They also required a great deal of care and ate a lot. Consequently, the "breed" died out in the early 20th century. Mules were a lot less work, and didn't eat as much. I couldn't find a picture that was specifically labeled as a Conestoga Horse.

Conestoga Wagons didn't have an actual driver's seat. Point three coming up. Note where the two people are in this next picture. 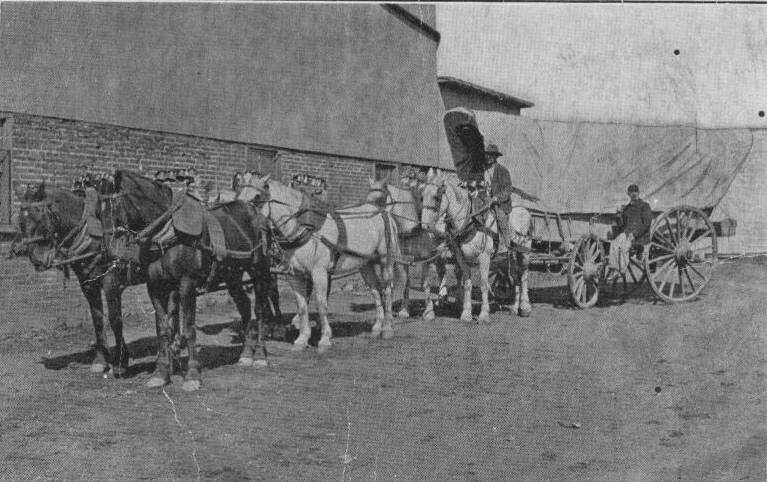 The man on the wagon is sitting on what was called a "lazy board." This was a removable platform where a driver could ride if he didn't want to walk or ride one of the horses. Then look at the man on the horse. He's on the left rear animal, which was considered the correct place from which to drive. Most people were right handed, and used that hand for their whip, so they could reach any horse on the team.

It is speculated that this is why Americans drive on the right of the road! When meeting another team, the driver wanted to keep the oncoming wagon to his left.

So what's with Conestoga? That is the name of a region and a river in Lancaster County, Pennsylvania. The area was settled by Germans, hard-working farmers who also seemed to find time to invent and become entrepreneurial. They gave their name to a number of things including a cigar and a type of heavy shoe, both favored by wagon drivers, and both became knows as a "stogie."

And where does the word itself come from? It was originally the name of a small sub-tribe of the Iroquois Nation. The Canestogas were peaceful Indians, but the last of the tribe was killed in 1763. The word may mean "people of the cabin pole."

History is SO cool!

Posted by Sharkbytes at 9:31 PM

History is in fact very cool.

So cool that the jungle can tell me more about it.

That is an excellent tidbit from history. It never occurred to me to think about different styles of covered wagons.

A little odd that Schlesinger would have named his book so closely to the infamous film.

I have enjoyed this history lesson. Amazing to think of building a wagon so stuff wouldn't fall out on hills.
Great photos too. Thanks.

Interesting, I didn't know all this. I certainly wasn't aware of what an impressive load one of the largest ones could carry. I also had no clue that there was a specific breed of horse to pull these

rainfield- can you find big wagons in the jungle?

Chuck- well, the nicknames for the later ones were prairie schooners

Tony- Thanks for stopping by! Well... it's a good title, maybe he thought his reputation was strong enough to disassociate it from the other one.

Ann- I really don't think I'd ever heard about those horses.