Chuck emailed me his daffynitions. Get ready for fun.

1. Pat era- which refers to that period of time when Pat Boone topped the hit parade and Patsy Kline wooed the cowboys.
2. A nautical vessel that repeatedly sails beneath the water’s surface OR A snake sandwich. This derives from “sub” for the type of sandwich and “reptious” or “reptile.”
3. Dan is in fact a fellow who was always in getting in one’s way and he was habitually late for supper.
4. This was a Chicago-based micro-blogging platform that was, unfortunately, ahead of its time and never caught on.
5. This device is one our Sharky friends favorite electronic toys. The name is a contraction of “trail stereo.” It was a follow on to the famous Walkman, but being lighter and more compact, was designed with the female hiker in mind. Haven’t you ever noticed the nearly invisible ear buds that Shark wears when on the trail?

I've got no argument with any but the last one. I don't listen to fake sounds on the trail!

Here are the real answers

1. patera
a. soft-spoken dialect- nope- that's patois
b. a saucer-like dish- yes- used for libations or sacrifices, usually decorated
c. a type of knitting
d. the aged finish on metal - you were thinking of patina

2. subreptious
a. under the skin
b. misrepresentation usually by letting someone believe something by leaving out parts of the truth
c. underlying cause of a wound
d. beneath contempt

3. dan
a. a college professor- that's a don
b. an animal's home- den
c. a level of proficiency in martial arts- yes, one of the 12 levels of black belt
d. the senior member of a group- the dean

4. tumbril
a. a tambourine- tambril
b. an embroidery hoop- tambour
c. a roll top- as on a desk- tambour again!
d. a two-wheeled cart- such as the kind used to transport bodies during the French Revolution

5. latilla
a. peeled twigs- yes. It's Spanish. Chuck knew this one and the next with out any trouble at all.
b. lace
c. a tic
d. a small rabbit

6. trastero
a. a marketplace
b. a pale limestone resembling marble- travertine
c. a stretcher for drying laundry
d. a sideboard- a Mexican sideboard or hutch

And.. FINALLY, I have daffodils open at my house! 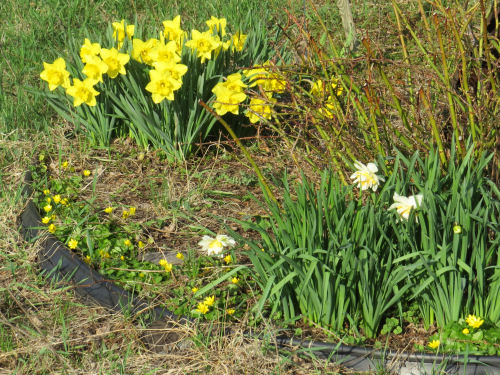 Thanks for the shout out. You know that I would never--not even for a single minute--think that you would in fact listen to anything other than the sounds of your surrounds when you are on the trail. Sorry, I got carried away with that one. Okay, I thought you might delete that part.

Chuck's definitions are quite entertaining and your real ones quite educational :)