Manistee and a New Skill


I like to take pictures that are long views of towns. Those are hard to come by where there isn't a lot of terrain. Previously, I showed you one view of Manistee from the east side of Manistee Lake. However, Manistee has 6000 people, not exactly a town you can get into one picture, except maybe from an airplane.

So this view is from a completely different place. It's taken on the far side of the hill you see at Everything is Better With Sunshine, in the third picture. Specifically, this one is from the corner of 3rd and Elm Streets, looking north. Just a nice view of a residential area probably built in the early 20th century. The hill where I took it from has a lot of very large and impressive old homes from the 19th century. The people with the money liked the hilltop too. 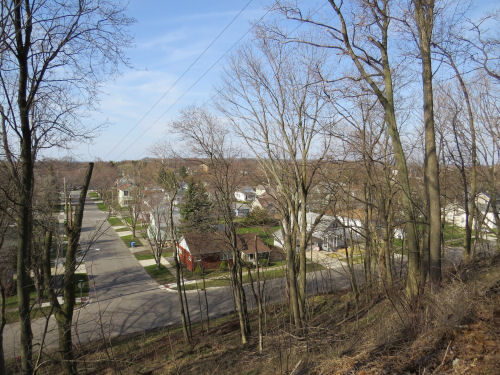 And that leads me to the new skill. This camera was new in December. It's supposed to be just a newer version of the one I had before. Some things are harder, some are easier. I never did figure out how to use the manual focus on the other one. But, guess what! I know how to do that on this one.

So here was the challenge. From that same hill I could see some older buildings in the distance to the northeast. But the camera was insisting on focusing on the trees in between. Dang! Here's what the camera wanted to do. 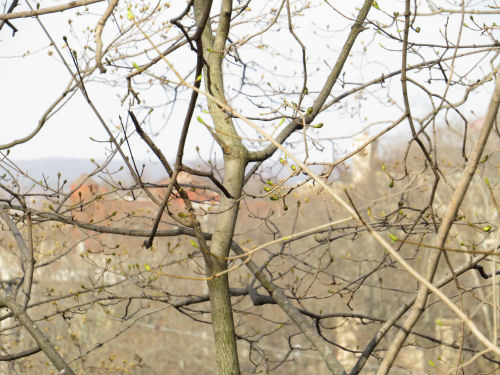 Could I make it focus in the distance? This was what I got after using the manual setting. 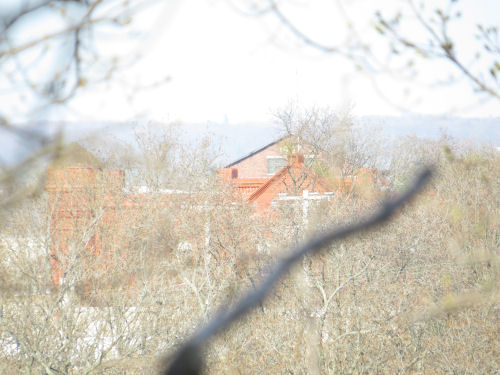 I couldn't tell for sure what building it was till I got home, but it's the Ramsdell Inn, where Ramona's retirement party was. I'm not sure what the building a couple of blocks over with "1927" on the gable is. Now I have something else to look for!

Email ThisBlogThis!Share to TwitterShare to FacebookShare to Pinterest
Labels: cities, learn something new

I've missed a lot since my blogging semi-absence. I didn't know you had a new camera until now. I know your old one was the previous version of the one I have, almost identical. I'm getting ready for a new one too because mine is beginning to malfunction. How do you like this new one so far?

I'd love to take pictures like this for a living. Maybe I ought to look into that.

Hi Ratty- It's OK. They've fixed the lens error problem. But it uses a battery pack that has to be charged, so it's not going to work for hiking trips where I have consecutive days with no electric. I have figured out the manual focus, but the super macro doesn't seem as good. It's forever doing something I don't expect... but the old one did that too. I think I need lessons.

Tony- I sure haven't been able to make much money off pictures. Too many people doing it, I expect.