Many of You Guessed Survival


Sadly, the frost took a huge toll on the cherry and pears. But I do have a happier survival story for today.

In April 2011, I blogged that the Rabbits Were Happy. They had stripped nearly all the bark from my flowering quince bush, which had FINALLY had lovely blooms the year before. Several people said you thought the bush would survive. I wasn't so sure.

But, guess what? It has enough greenery to look like a small bush again. You can see a couple of the dead branches from the rabbit trauma. 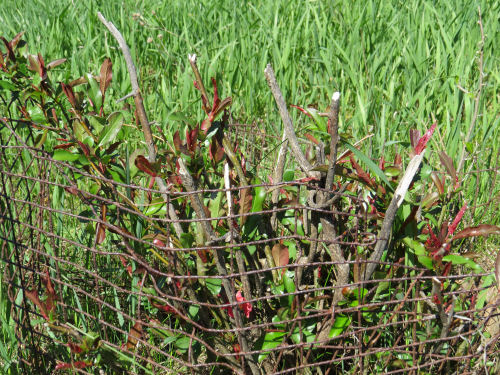 It has two blossoms this year. That's sure a far cry from the potential. I see flaming bushes six feet tall in other people's lawns! But it is two blossoms I never expected to see. 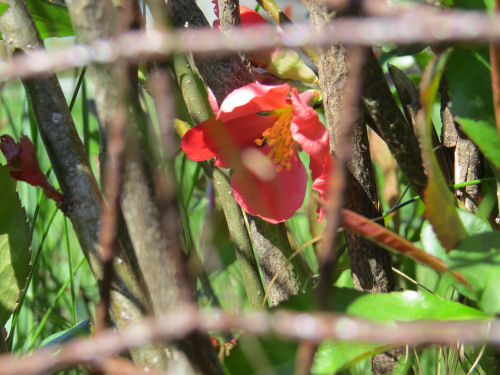 Two blossoms is definitely better than nothing, and it looks like you've protected it well now. Maybe one day it will become what you hope for.

I hate that the frost came at blossom time.
The rabbits did a number on some of our bushes that year, too. We once lived where we had a quince. I enjoyed it very much.

Yesterday, I noticed that rabbits had taken their toll on a burning bush by the front corner of our house. I'm glad that survival ruled the day for you.

Because you live in such a different part of the world from me Joan, I love your posts and photos of plants and wildlife. The flowers in this one are gorgeous and truly deserve their name. I hope your tlc will eventually bring it back to a full on 'burning bush'.

too bad about the pears and cherries but great news on the flowering quince bush. Pretty blossoms on it

Ratty- It's had that fence all along. When the snow gets high it doesn't help a bit.

vanilla- the farmers are saying 30% loss. But last year it was nearly 100%

Chuck- Is there any attractive bush they won't eat?

Jean- I need to add you to my feedly. Burning bush is actually euonymus, but this sure can look burning in the spring. Euonymus is red in the fall.

Ann- I hope I'll live to see it really nice.

Oh, that darn frost! It burned many of my plants out in the yard....but I'm hoping some will come back. I hope so.

Glad to see that you quince is making a comeback. I love that it shot out a flower for ya---what a sign of hope!

Too bad the rabbits can't choose some less attractive bushes out in the woods..guess they aren't as tasty.