I don't know how hot it got here, but it reached the threshold at which I declare it too hot to work. So I played.

You know I love jigsaw puzzles. This demonstrates that it's way past that, more like an obsession. I had brought the box for this puzzle up to the house from a storage shed. The box was smashed, and I was quite sure some of the pieces were lost.

We have to back up 23 years to start this story. I used to have an extensive collection of jigsaw puzzles. Several hundred of them. People knew they could always make me happy with a challenging puzzle for a gift. I had puzzles from my childhood that I would put together in an hour, just for the comfort of them. Several of them were cut in the same pattern, and I liked to compare whether the different pictures consistently affected how long it took me to assemble them. I had round ones, shaped ones, ones with pictures, ones with geometric designs, solid color ones, double-sided ones... OK, I think you get the picture.

Buying jigsaw puzzles (and socks, but that's another story) are to me what buying new shoes is stereotypically supposed to be for women.

However. Yes, with a period after it. However, 23 years ago, my collection was destroyed in a freak accident. Only about five puzzles survived. We lost a lot of other things, too. I got the chance to verify that I really do believe stuff is just stuff. But I do miss many of those puzzles that had become old friends. And interestingly enough, I've never tried to build a new collection, not seriously. I've worked three or four in the past five years. (Ahem... reality check, Joan. This is your conscience speaking. You have discovered online puzzles. Not quite the same as hands-on cardboard, but don't imply you haven't wasted mucho hours doing puzzles)

But I found this smashed box the other day. I decided I'd put it together just to be sure there were pieces missing. If there were quite a few, I'd throw it away. Today it called to me. Here it is: 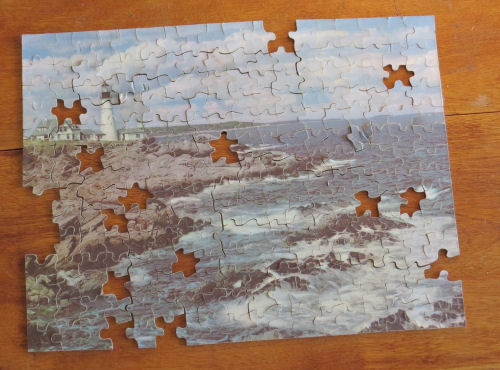 It's a 252-piece puzzle, from which 17 pieces turned out to be missing. Two of the ones that are there were mangled so badly I had to really work to flatten them. Some of the pieces had gotten damp and swollen. And yet...

It's supposed to be a picture of "rock bound shores." It's not even a very pretty picture. The colors are muddy. And yet...

There it was, a puzzle I don't remember doing before. The cut isn't a standard one, so there was some challenge in that. Having missing pieces is a little tease. Two hours later, I have the proof that I can throw it away. I think I can even do so without a sense of loss. Maybe.

The love of jigsaw puzzles runs in my family. My mom and my gr45andma used to always have one set out on a table in the house. Today I just use the computer versions.

And I am frustrated when a puzzle is short one piece.

That is an interesting cut pattern. We used to do puzzles on a regular basis. Haven't done one in quite some time. Perhaps it's time to do one again?

I love puzzles too! Winter is a good time to put one on the table and let everyone join in. It's such a great thing to do and have others jump in here and there to help.

Ratty- I find the computer ones fun, but less interesting

vanilla- well, it's not my favorite thing, but it did add some suspense

Chuck- next time I come! (or sooner)

Lin- They can be quite social