Twenty years is a long time to be in one very small apartment. And getting out in a hurry is serious business, even if you are able-bodied. And Elaine is not. She's has much more stamina than she did even a couple of years ago, but she needed help with this project. Marie, blessings on her, agreed to come help even though Elaine is more my friend than hers. I'm sorry to have to tell you that Elaine and I are packrat twins, so the project was daunting. (Pray I never have to move.)

Here's the house where Elaine's had the attic apartment for such a long time. The outside stairs aren't bad, but the second flight inside is steep and narrow. 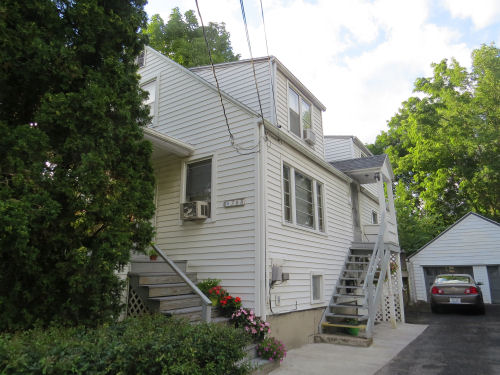 Here's what we started with in the kitchen. Elaine had already done quite a bit of sorting, but that mostly made it look worse. 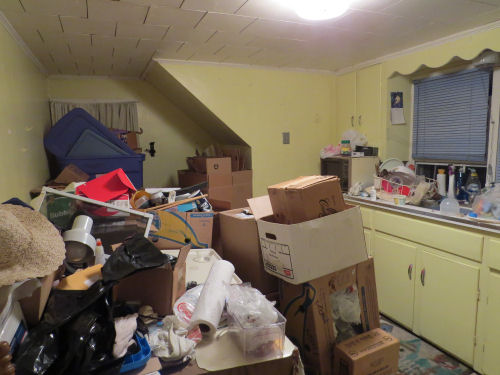 Where she is going to is a six-unit actual apartment house. Only up 1 1/2 flights of stairs, wider and less steep. And although the kitchen is smaller, it's a nice space with a pantry, and she has a living room, bedroom and den/office. We were so busy I kept forgetting to take pictures at good times. Some of them I had to take with the phone because the camera was in the other space. Here's the new apartment house at night, only about 6 miles away from the previous place. So, she's moving to the top left apartment. 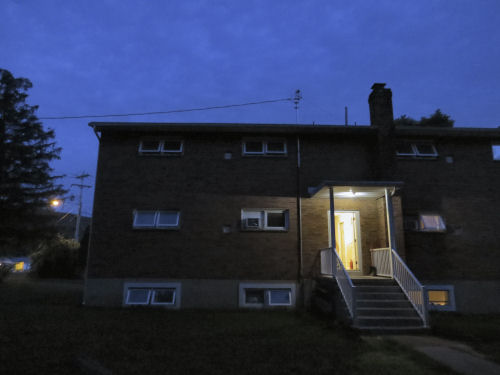 The least favorable thing about the new location is that the only service within walking distance is a small convenience store. But it is on the county bus route, so if she figures that out, she'll be able to get to town with a little planning. The DSS takes care of getting her to medical appointments and things like that.

The next two pictures mostly demonstrate that a) we did make it to the new place b) we are all tired c) we survived d) we moved boxes. What can I say? The picture-taking was not the priority. 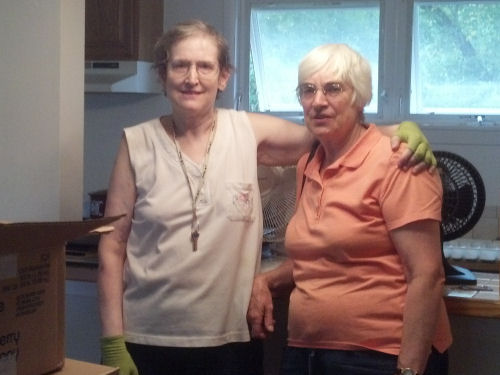 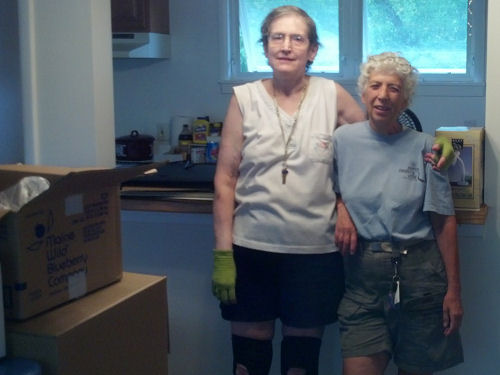 We took seven car-loads of boxes over, and got a lot of the new kitchen organized too. I cleaned the cupboards in the old kitchen, so at least that part of the cleaning is done. There is still a little bit of loose stuff to corral, but I think Elaine can get that done on her own. When I left this morning, the helper-guy from DSS was already there taking away the unused cardboard boxes (a lot of them), and he was going to take more of the small furniture items in the van. Then she has tomorrow yet to do the final boxes of things like empty the refrigerator, the toiletries and immediate use things, and on Friday the movers come for the big stuff.

One of her sisters is going to help her tomorrow. That may go well. If you are given to prayer, that could use a little heavenly massage.

Anyway, we accomplished a TON of work. Even the banana box was shocked. 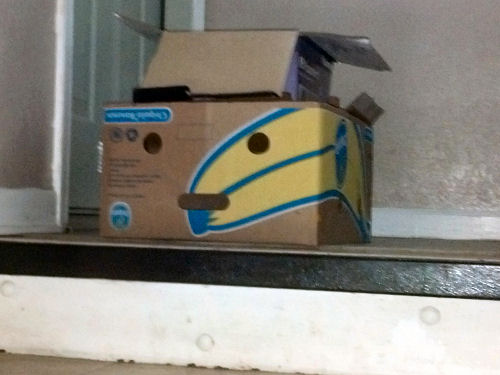 All the muscle works.

You are incredible, Joan...and a great friend. How I wish I had been able to enlist you when I packed up from my 4 bedroom home of 14 years to head to India....it took delaying my flight twice - with penalties each time, & giving most of my belongings to Goodwill and selling some things at ridiculous prices - an upright frost free freezer, large size, one year old for $100, for example...but I got it all into a large Public Storage unit - for which I am paying $380/month!!!