The writers' group decided to have a booth at the Ludington Art Fair this weekend. We offered "broadsides," which I'd never heard of. They are poems printed on good paper, with some sort of art added. One of my poems was chosen. We could submit them, and a committee did the selections. Books written by member authors were also offered. We gave part of the profits to the group.

I helped man the booth one shift yesterday and one today. Here, Vondie and Kurt take over for the final shift of the day. I think we did all right for the first year having things at the fair, but we need a good sign that explains what we are about, and a better-looking display. 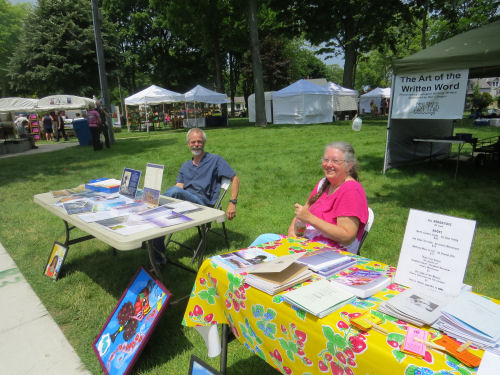 The group made a little money. I'm not sure the idea of broadsides has caught on here yet, but we have a good stock for another time. A few of them sold. I'm afraid quite a few of our sales were members buying things of each others'. That still gets money for the group, but doesn't say much for getting the word out, although several people signed up to be on our email list.

Actually, two copies of my book, North Country Cache, sold. That was a bit of a surprise. It doesn't usually do all that well at general venues. One of the sales was during my shift, so I signed it. 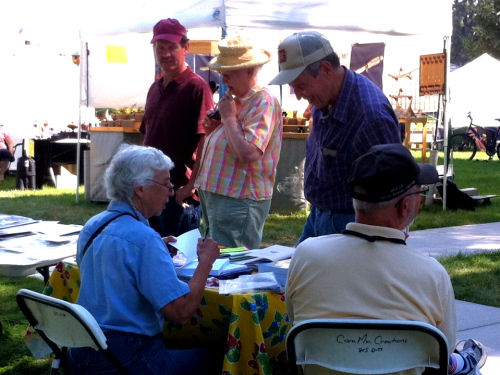 My friend, Valory, who is accepted to Kendall School of Art for the fall, was there doing portraits. She's an amazing and enterprising young person. 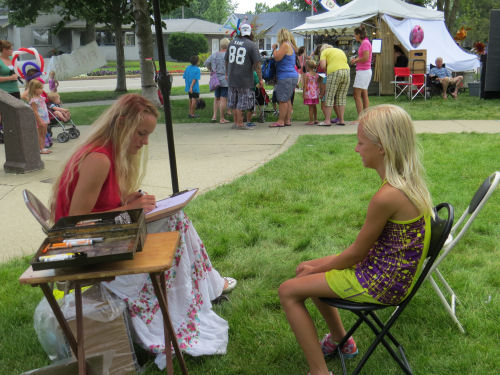 I'll be giving away the poem that was selected for the broadside to all who are on my Mail Chimp List when it reaches 50 subscribers.

Great that you sold copies of your book! Sounds like a nice day - beautiful weather.

Sounds like you did ok for the first year. Congrats on the sale of two of your books.
I signed up for the Mail Chimp list

Carmen- it WAS great weather all weekend for the Art Fair. I think the venders were happy.