Loretta and I went to see a play tonight at the Howmet Theater in Whitehall. I'd never been there before. We decided to take in a light play, a comedy called Anybody for Murder?, by Brian Clemens and Dennis Spooner. I wasn't familiar with it, but we decided to take a chance. The play is hilarious.

It begins with Max and his girlfriend Suzy plotting to kill Max's wife Janet. First they drug her, and when she passes out in her cereal they begin plotting how to finish the job. 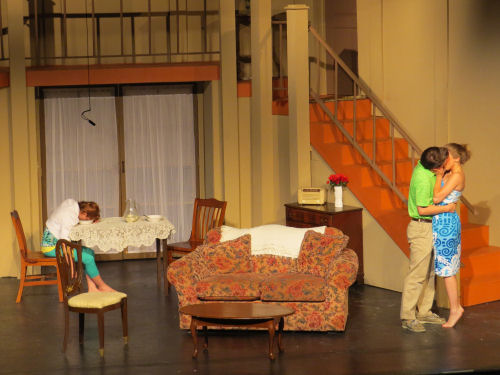 But then George and Mary show up with the news that Mary is Janet's cousin. Suzy has to pretend to be Janet. A relative has just died and they are about to inherit a huge amount of money, but Janet is a slightly closer relation than Mary. 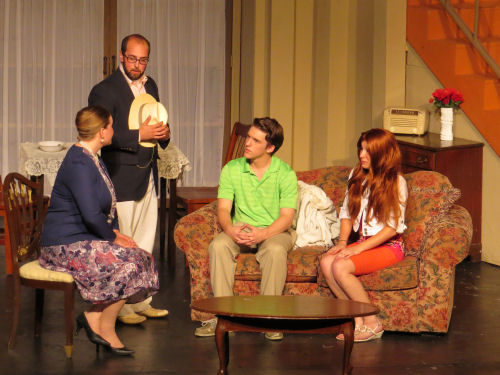 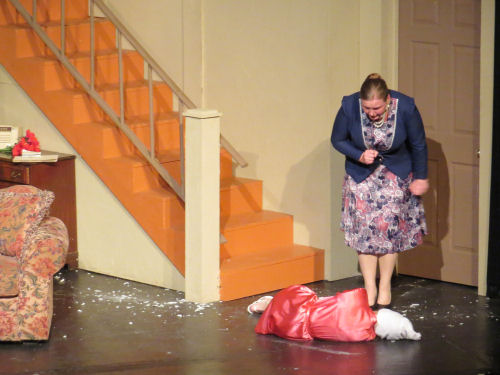 Hilarity ensues. "You can't be Janet. You're not the same woman I killed yesterday." 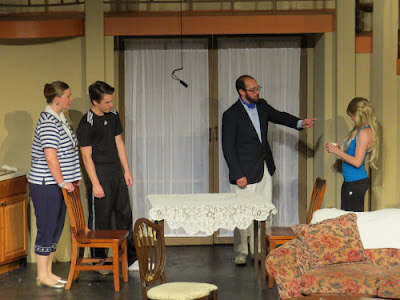 But the body has a strange habit of returning to the scene of the attempted crime. 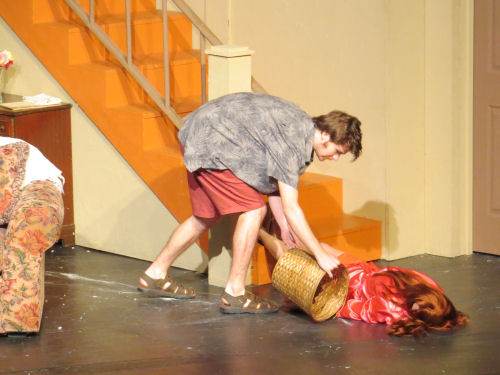 Although the play was given in the Howmet Theater, the troupe is summer stock from Central Michigan University. I always have a little trouble with characterizations when all the actors are college age. I even had trouble with it when I was a drama major in college. This group overcame that with some success. Mary and George were particularly believable as a domineering woman and a jumpy henpecked husband.

The idea of the set was perfect for the play- and there was only one set. I would have tweaked the design a little bit for better sightlines for some of the staging on the upper level.

The lighting was really well done as you can tell by the clear pictures. Plenty of light on the stage!

The cast did seem to have a little trouble getting warmed up, or maybe it was the audience that needed warming up. Anyway, we soon got into the crazy complications of the story line. There were too many instances of no one being on stage as Max or the couple are running around trying to keep the other parties from finding out what they are up to. I'm not sure how to overcome that issue, as it seems to be written into the play. But, when the blocking becomes noticeable, there is something wrong with it.

This play was written in 1990, and is fairly family friendly. Part of the humor is mixed up with quite a bit of drinking at the end, but the jokes are not based on risque puns, but in the twists of the plot.

All in all, if you have a chance to see this play and are in the mood for comedy, I recommend it.

It looks like fun. It makes me think I should try to go see a play some time. The last one I saw was when I was a kid. It was Peter Pan.

Convoluted! A little evil fun for your entertainment.

Sounds great. Pity that don't make movies like that. Or do they?