I've been wanting to try the traditional method of making fruit juice on autumn olive berries for a couple of years, but picking the fruits is kind of a pain. Unless you stumble across a bush that is loaded like this one! 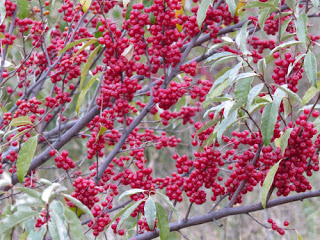 I cleared this one bush and in about a half hour had a gallon of berries to take home. I had stopped to take pictures of the sunset and discovered several bushes that were loaded. Since this is really a garbage shrub/tree, I'm sure no one cared that I was stealing the berries. Everyone thinks you are nuts when you explain that they make good food. 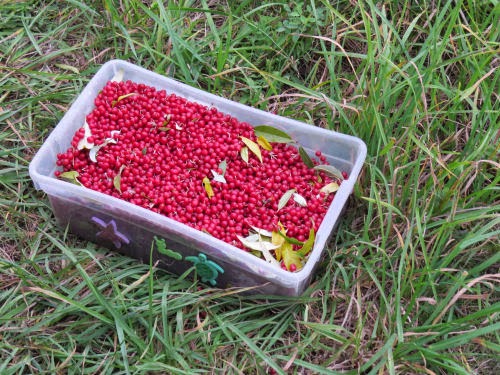 Yesterday afternoon I turned them into juice. I did pick through the tub to remove the woody sticks and leaves. I'm really glad I did this because I don't think the three Asian lady bugs, the cutworm and the stink bug would have improved the flavor of the final product.

After I boiled the berries, I strained and squeezed the fruit in a jelly bag. 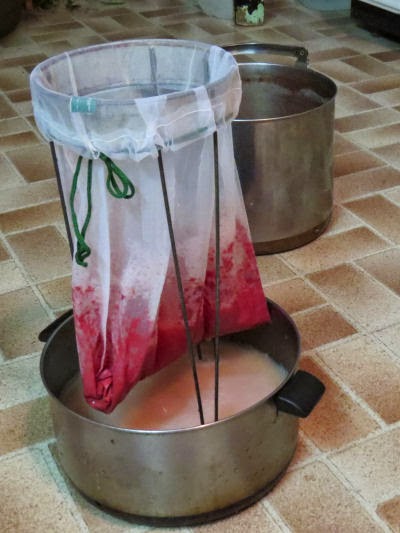 I ended up with five quarts of juice. Here are four of them. 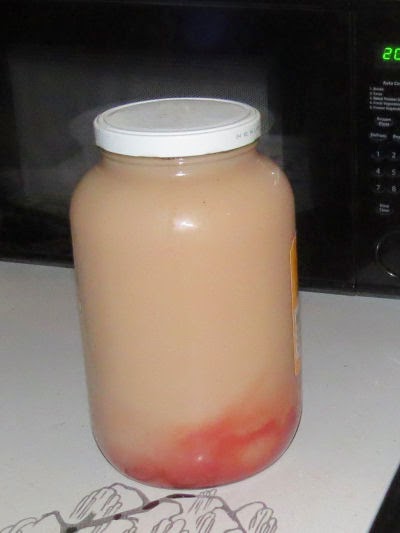 I still have to put this in canning jars and process them, but I can do that tomorrow or the next day. I'll be posting more about this on Grazing the Ditches, but overall, this still isn't my favorite juice. The berries have a nice tartness to them, but that is lost with both methods of juice making. You end up with something more like fruit punch. The milky texture is a little weird too, although that is only an issue of looks. It's not strange in your mouth.

At any rate, that's my big kitchen project for the week.

So when life gives you stinkbugs, you don't make juice outta them? ;)

Well commercial makers of juice do use additives but I'm thinking even they wouldn't consider using lady bugs, cutworm or stink bugs :)

Didn't know you could do that with the berries. As Mom would say, "Live and learn."

Never thought of using these. For what it's worth: when picking elderberries, I snip twiglets full of berries, place brown bag full of such in freezer; later, strip berries from twigs. Might work with these.

Ummmmm, definitely a lot of work or so it seems...but, if you like the final product and consider it worth while, good for you. I would drink to that.