Ester and I went on a road trip today. It was a lot of driving, but it was a place I really wanted to explore. I'll show you a few pictures today, and probably some more tomorrow.

We went to the northeast corner of the Lower Peninsula, to see the only waterfall in the entire L.P. It's name is Ocqueoc Falls (say AH-key-ahk), on the river of the same name. It consists of about five small tiers of drops. I wouldn't put it on my list of most spectacular places in the state, but it was nice, and I like how unique it is. 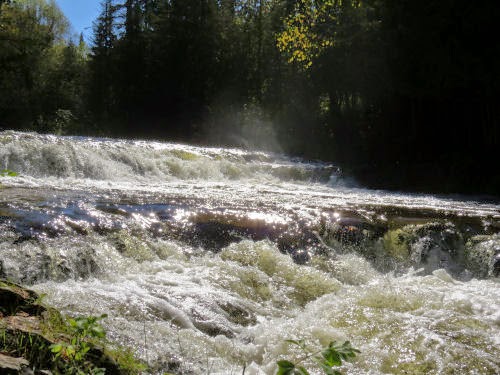 Of course, on that side of the state, the big lake is Lake Huron. It wasn't looking much different from Lake Michigan at this location. Of course, you'd have to watch a sunrise over that lake instead of the sunsets on the water that we enjoy. In fact, one of their ad slogans is "Visit the Sunrise Side." 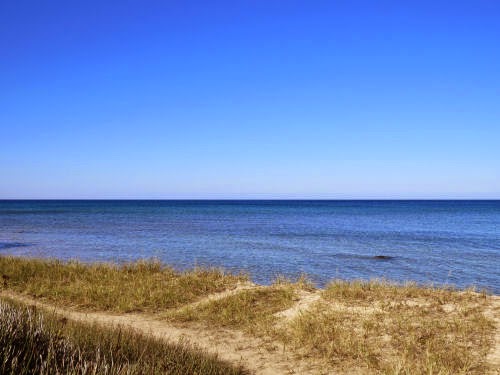 Just had to prove that both of us were there. With Whitey. That's Ester's "new" dog. 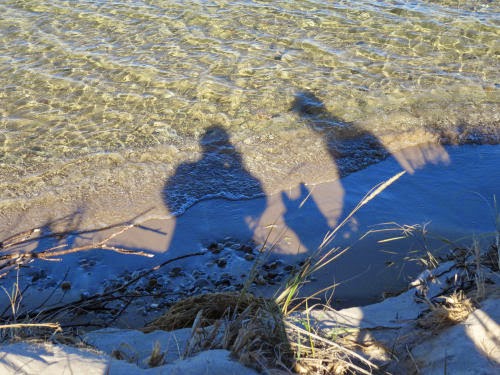 The autumn colors still haven't hit their peak. That was a surprise, because we were quite a bit north from where I live. But there were some leaves that were quite nice. This was a spectacular maple; unfortunately, most of the top had died out, but still worth a WoW! 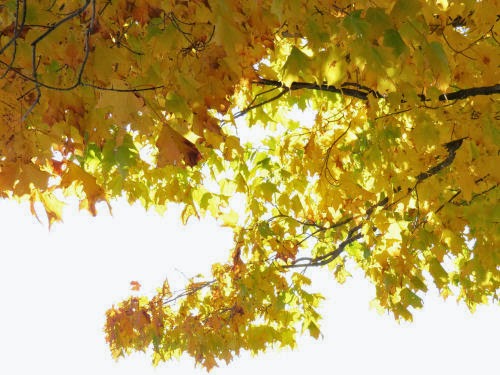 This was my favorite leaf. The dark colors appeal to me. 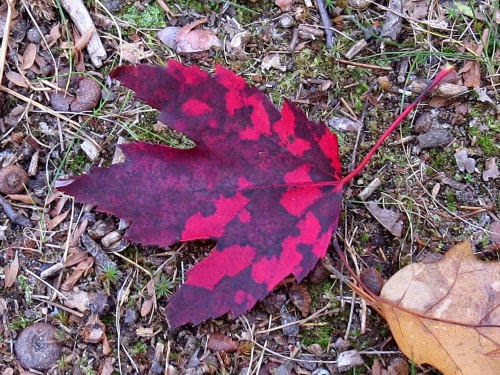 Our final stop was a complete surprise to me. I had no idea that the world's largest gravel pit is in Michigan. It has been mined since 1912. We stopped at a viewing platform, and it looked really big. Then we found an interpretive sign that told how far it was to some features we were seeing. I did pull this picture in with the telephoto, but it is two miles to the far pit wall in this picture! 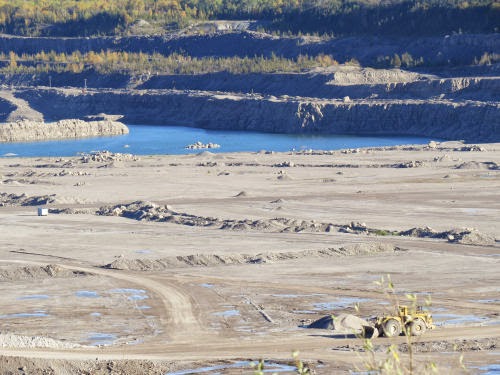 Long day in the car, but we had an amazing time. The weather was blue-sky October perfect! Will show more tomorrow.

Looks like you visited some great spots. Love the blue sky in that lake picture.
That leak with it's two different shades of color is really pretty

That's a pretty pink and purple leaf. Also, quite some gravel pit. A blessing from the ice age--at least so we are told.

"Tier drops." Gotta love it. Oh, I pronounced the name correctly before I saw you pronunciation guide. Not familiar with it either. This was a wonderful trip for you and Ester. Happy you shared it with us.