Yes, I'm posting very late (really early the next day) because we just got back from watching Star Wars: Episode VII- The Force Awakens.

I was prepared to be disappointed. But I WAS NOT. This was great stuff if you are a Star Wars Fan. Classic, simple, a twist or two. All the old folks like us at the theater were loving it, but the younger viewers were too. The group behind us clapped and cheered as loud as we did. 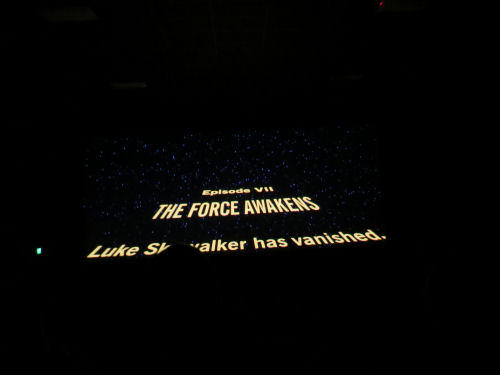 I won't give anything away (except to say the plot is not like the authorized books). I'll only say that this movie verifies that the series is as much the Shakespearean story of a family as it is about intergalactic politics.

As always, we stayed through ALL the credits because they show where it was filmed dead last. Remote locations: Ireland and Iceland (for the places that aren't just CGI and Foley screens).

Can't wait for VIII and IX!

Posted by Sharkbytes at 1:17 AM

Email ThisBlogThis!Share to TwitterShare to FacebookShare to Pinterest
Labels: movies

I'm envious of you. I can't wait to see it. Finally confirmation that it's good from someone I trust. I've been hoping this one would be good, but I've been prepared to be disappointed. I'm hoping to see it sometime in the middle of next week.

Believe it or not I have never seen a single Star Wars movie. Glad it was a disappointment

I like that, Shakespearean. Good way to put it. I liked it, too.