Today's hike generated some beautiful pictures, but you know, there apparently can not be a day without a lost trail adventure. Today's was early. Jerry was able to spot me one more time. I hiked for a half hour with beautiful blazes, and then they just ended... what else is new. Hunted. Began bushwhacking with compass- no sun today.

An hour later, I found five blazes all by themselves. Didn't follow them backwards, but they did not persist in my direction. Through saplings, cedar swamp, clearings, some open woods. None as bad as the aspen and blackberry and deep swamps. Twenty minutes later, I crossed a ski trail. I know that because there was a DNR trapezoid marker. Nice trail. Going north. Mine. What you can't tell from the picture is that this is a significant downhill. I had just climbed up to the top of just about the only hill around, so I knew exactly where I was. 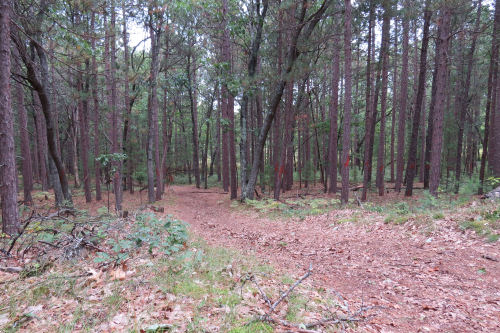 Walked north to Carter Lake Road which was where Jerry and I tried to find the trail crossing yesterday without success. Nevertheless, I knew where I was going now, and worst case, I would walk north on Meridian Rd. Almost everything in this area is an ATV trail. They look like this. It's like walking in beach sand. Not fast, but at least I knew where I was. 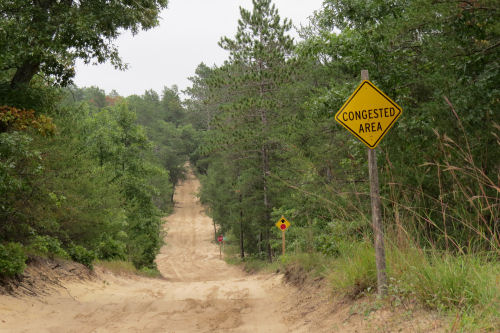 Walked till I got to Meridian. Jerry and I did not drive far enough yesterday, although neither of us really wanted to get into any deeper sand. But it wouldn't have mattered if we did get there. Even though the M2M map and the DNR map says the trail goes right through that intersection, there was not a blue blaze in sight. I turned north.

Thought I found a blue blaze. Ha! It was a blue glove. 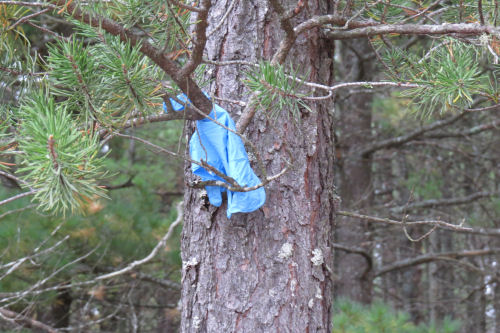 So I decided to have a Blue Glove Lunch. Seeing blue nearby makes me feel confident, maybe... 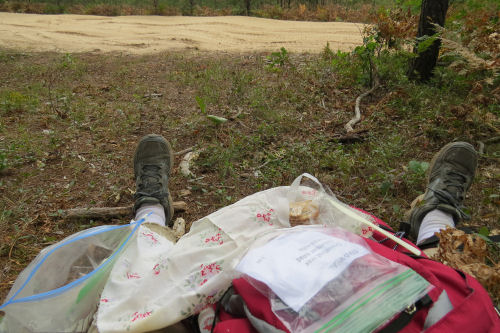 Later a great horned owl swooped right in front of me!

Picked up the trail again just north of where we had left my car yesterday. Although I confess to feeling a little trauma when I head off of a known route onto trail. Seems like the chances of it disappearing are high.

Hiked a while. Beautiful fresh blaze on a tree, then nothing. I'm like, what? Did you just get called home to dinner? Did you run out of paint? Do you think no one is going to hike any farther in? Did you get bored? Worse yet, it was a tree with a fork and both forks had been painted. What does this mean? Is it a turn? Is it Scouts who just like to paint everything? (there is a lot of that) So, I'm hunting and hunting, and about ready to bushwhack back out to Meridian when I see a post on the ground buried in last years grass. Blaze on the side! So I explored farther in that direction, and found the next blaze deep in a jackpine stand.

Good. have trail. Bad. blazing bad. I know the current philosophy is to turn the boys loose and let them learn for themselves, but someone needs to teach them how to see the trail through a hiker's eyes not just as a larking part of their fun weekend.

I dragged the post down the trail and leaned it against a tree in the correct direction.

A few more neat places. I think I temporarily slipped into Middle Earth. This was really cool. 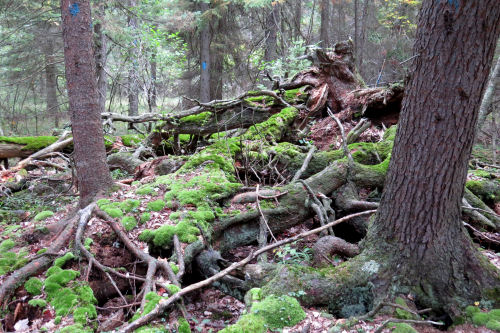 The trail crossed a little creek on the mossy roots. 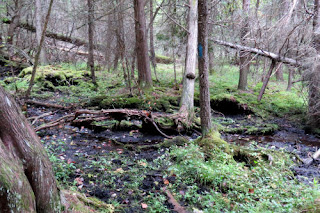 Back on to Meridian (actually probably an ATV trail, not Meridian), which was where I was supposed to be now. Ankle searing walking, but a solid bridge across Marsh Creek. Pretty wild looking! 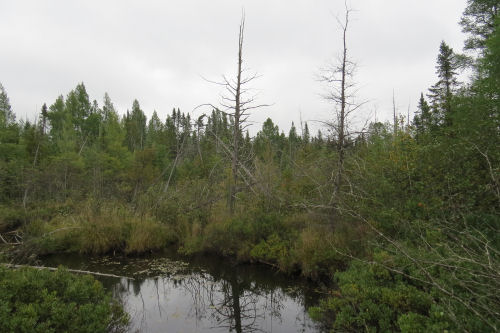 Left Meridian one more time and joined a lovely lane that was much easier walking and was a beautiful ending to the day. 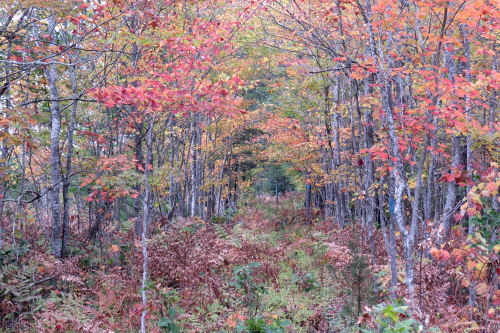 Reached my car at 4:20. Nice to make my goal for the day! Trail miles about 10, so my total is at 65.5 ish. Actual miles walked- probably not much more than 10, although the ATV trails aren't very straight, and I doubt my bushwhack was very straight either. Light rain all afternoon, but not a real problem.

Posted by Sharkbytes at 6:24 PM

I was a youngster when I had an encounter with a great horned owl. It scared me, but I never admitted that.