Jerry and I had trouble finding where the trail crossed the road where I wanted to stop, so we had to go a couple miles farther north. Long story short I didn't even start hiking till noon.

But first, a pretty lake, Dunham Lake. It's near Dunham Lake Road on which I began the day. Keep that road in mind. 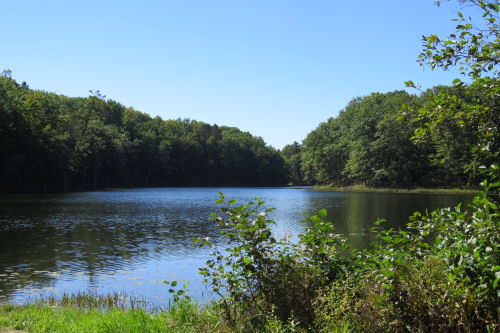 A few hints of fall in the woods. 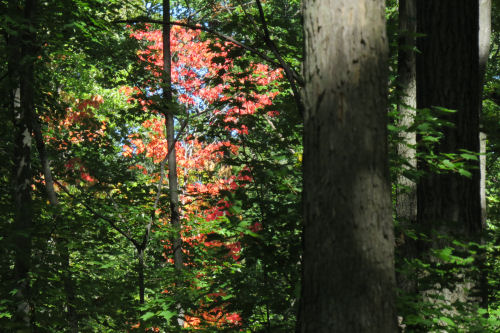 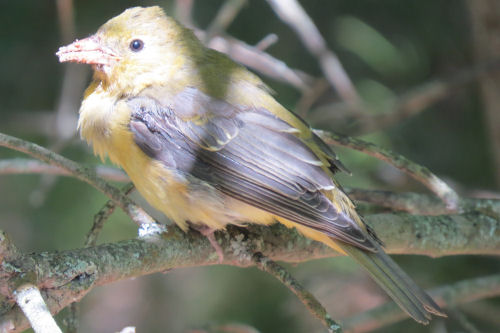 Dry feet all day. The trail has entered higher forest with lots of oak.

So I lost the trail twice and found it twice. Then I lost it a third time. Never did find it again. I may have walked 12 miles or 14 miles- probably not more than that. But did not make that much trail progress. Figures up as about 10 miles of forward progress. Need to finish this post before the computer battery dies, because there is still no power at Connie and Jerry's.

Anyway... I was following an ATV trail, with just enough blazes that I knew I was on the right place. Then it went into an area of really fresh logging. Kept following the trail, and I actually found a blaze out there in the middle of the whole mess. 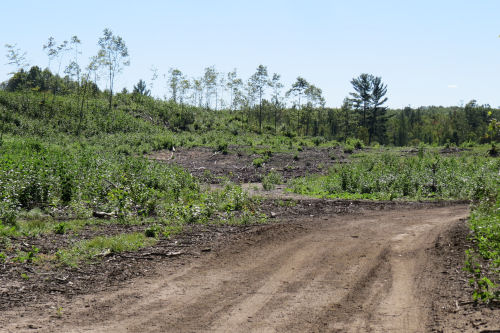 Then the trail turned to the right, which was what it was supposed to do so I thought I was good. But it kept going for too long. It was pretty in a desolate sort of way, but not correct. But there was no where else to go, really. Not going bushwhacking through slash piles. (But it had to go somewhere, since it was a marked ATV trail.) 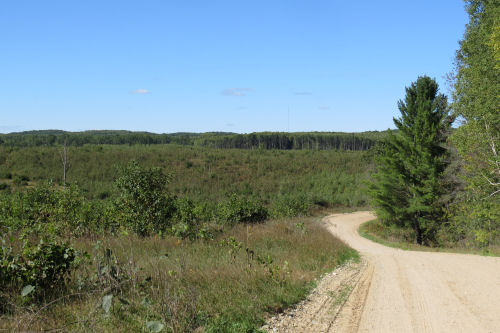 Finally came to a crossroad. Got my location. Right back on Dunham Lake Road, and south of where I thought I had made it to.

But I found where all the blue blazes have gone. They are apparently congregating in preparation for fleeing south or something. 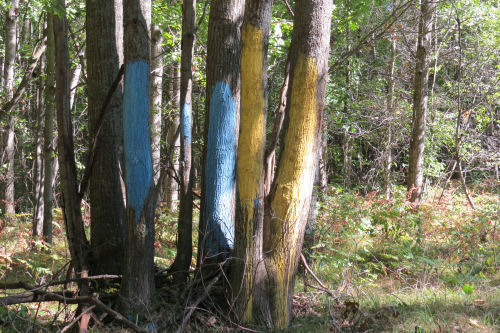 Walked roads back to where the trail crosses I-75 and crossed that so I can at least say I did something. Bummed a ride into St. Helen's and the nice lady took me all the way to my car. Today's trail angel was named Coleen and she wouldn't even let me give her a couple dollars.

Back at Connie & Jerry's, but no power so no shower. A lot like camping!

Total trail progress to date 55.5 miles, a quarter of the trail.

Posted by Sharkbytes at 7:22 PM

It sounds like it was a kind of frustrating hike, but it also must have been thrilling finding the next thing. I don't know exactly how you felt about it, but I had a good time reading about it. I miss long hikes.

hello sharkbytes its dennis the vizsla dog oh hay wow wot an od ... odyss ... wel ennyway wot a jurnee that wuz!!! i wood luv to see sum of those playses they luk so kwiet and peeseful and i think dada is missing his mowntin biking days lukking at sum of those trails!!! ok bye

With all the things I have seen you do through this blog I don't doubt your ability to do anything. I don't think I've ever read about a hike that has given you more problems than this one.