Last night’s sunset wasn’t a very good predictor. Neither was the weatherman. It rained off and on all night again, and was cold this morning. Cold and drizzly. Nothing that kept me from hiking, but certainly not the pleasant morning I expected. That’s what I get for checking the weather! 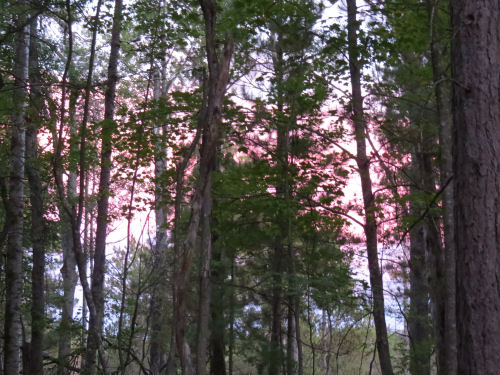 Today was also all on “roads” of some kind or other. Paved, dirt, service roads for power lines, snowmobile trails. One real hill to go up and down. 160 feet elevation change on Elk Hill. I realize on an absolute scale that’s not much, but it’s the biggest hill so far on this hike. It went down again to East Branch Big Creek. 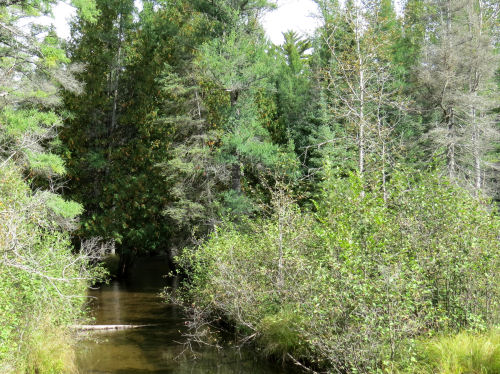 I reached my destination, but I can’t say I didn’t lose the trail. Again the M2M was concurrent with the Shore to Shore horse trail. They got all the markings, and I had no idea when the two trails separated. Checked each corner carefully, but when the S2S made a sharp east I said, “nope.” Followed the power line out to Townline and then walked west to where my trail came out to that road.

No one there was going to find their way easily. I dragged the sign to where it at least should be if it were upright. 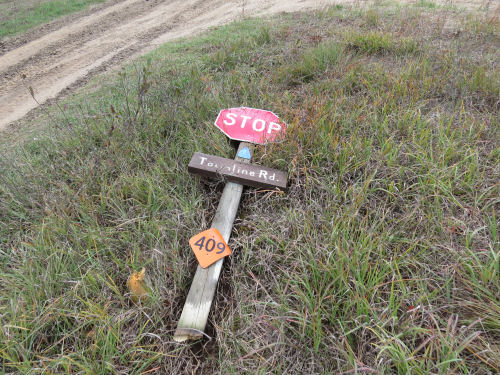 Let’s talk about trail marking. So far, I’ve been mostly following the blue blazes. Some have been dark blue blazes. Every once in a while there is a DNR trapezoid with the Scout emblem that is just for this trail. Sometimes there is the hiker/skier trapezoid. The S2S trail has it’s own trapezoid with a horseshoe. Sometimes there is flagging tape. Blue is reassuring, but someone went through a lot of miles with yellow tape, and that has been helpful. But here’s one I hadn’t seen yet. Just a hiker. Hiker faded. Hiker down. 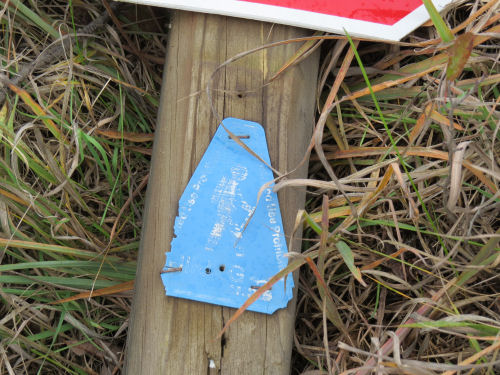 And while we’re on blazes, let’s talk about why I have trouble finding them so often. You’d think I’d have no trouble seeing this, right? Ones like this are great. Quite freshly painted, and they sort of stand out in the woods like Christmas lights. Easy to spot. 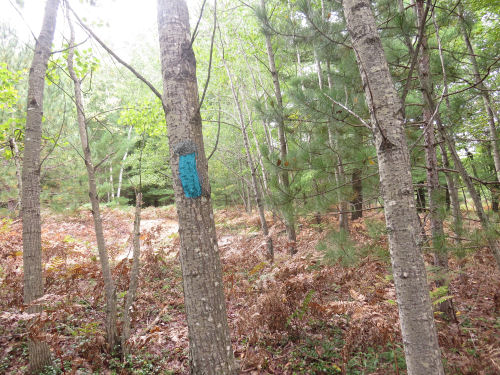 The paint does fade. This one is probably about five years old. Not bad. It was put on a tree that hasn’t shed it’s bark badly. Really good blazers scrape the loose bark before painting, which makes the blazes last even longer. This one also is still pretty much a rectangle. Although, on this trail, blazers aren’t so careful about that either. Harder to see from distance, but acceptable. 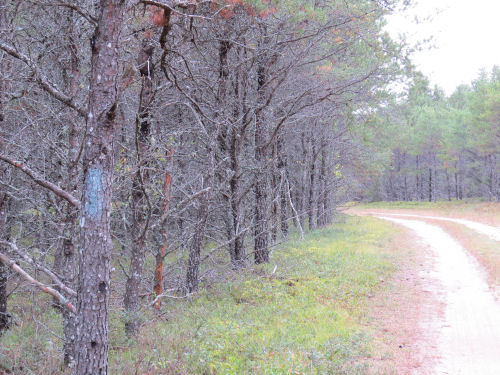 Sadly, all too often, this is what I’m finding, however. It’s probably been ten years since this blaze was touched up. 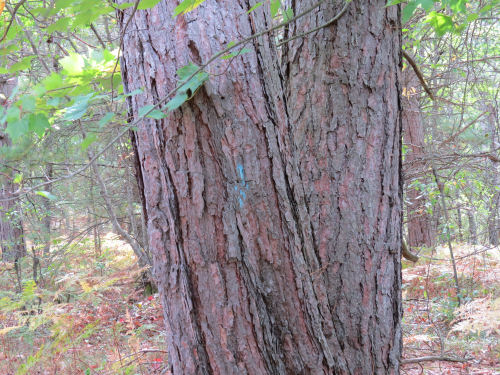 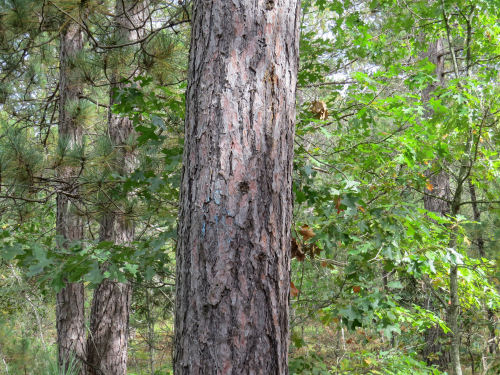 Finding these spots on the trees when there is no treadway to follow at all is what has made some of the days really difficult, and slow. Today, however, all went great because I found all the trail going one direction or the other. I'm not trying to be super critical. There just aren't enough people caring for this trail. But it will need better marking and more treadway to get good use.

It warmed up a little bit after two o’clock and there was intermittent sunshine. 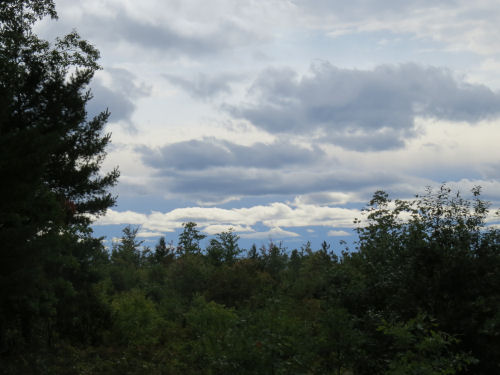 But except for needing to keep adjusting the jackets to stay warm enough without being too hot, it was a fine day.

Forward progress on the trail about 6 miles. Total trail miles to date: 101! Not quite halfway, but over a hundred. (Of course, this is all just best guesstimation. No one has actually measured this trail on the ground.) Total miles walked today 12 or maybe 12.5

Posted by Sharkbytes at 7:35 PM

Wow, some of those blazes are hard to see. Glad it was a relatively good day

hello sharkbytes its dennis the vizsla dog hay my dada has an old skarry storry abowt wot happins wen the blazes on a trail go wrong!!! i am glad that nuthing like that happind to yoo!!! ok bye