You might recall, back in April, I did a long post about how I was going to replace my Gumby suit (rain suit). Well, that got as far as needing zippers (which was immediately), and then it stalled because we don't have a fabric store except Wal-Mart any more.

I finally found zippers in May, but have I done anything about it? Of course not. I'd rather wait till the last week before a hike. The easy half is done. 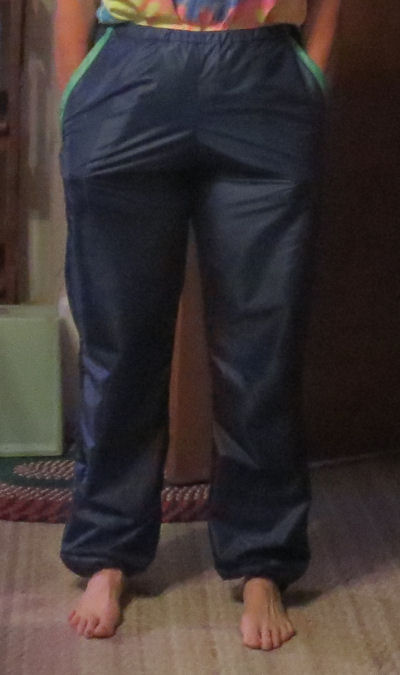 The old suit was spruce green with purple trim. I have some green ripstop, so I decided the new one would be blue with green trim.

The only thing I didn't do quite right is that the back pocket is just a little too high, but it doesn't really matter all that much. 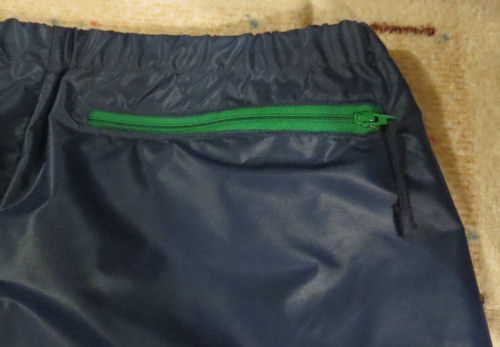 I did shorten the legs so they don't drag on the ground.

In other news: I worked at cleaning up the kitchen, and did errands. It took me a while to get the sewing set up and all the things collected that I needed. For someone who used to sew all the time (see Sewing and Breathing), I sure don't have my sewing supplies act together any more.

Onward to the jacket. I have to take the old one apart to make a pattern. It's almost like an old friend (a pretty much dead one), but I HAVE to cut it up. Sigh.

My sister used to have a cross-stitch above her machine. As ye sew so shall ye rip.

good job on the pants. Back in the day when I was making clothes for my daughter, I hated zippers. I would avoid zippers and buttons at all costs.

I think a lot of more specific shops like fabric stores have mostly moved online. The only problem with a lot of shops is that you have to buy in bulk to make the shipping costs worth it. I have to do most of my shopping on the internet because I live so far from civilization.

Hey, those look great! You did a good job! It's hard to find good sewing supplies now. We have JoAnn's here and they are pretty good for quick projects. Always let me know if you need me to look for something here and I can send it to you.

Ann- I don't mind them very much. Three of the ones on the Gumby Suit are set in- you know where you have to cut a hole through the fabric and put the zipper behind it. You have to be careful with those.

Ratty- Yeah, when I was sewing for money I bought stuff in bulk all the time. I have a really big stash of a lot of things. Unfortunately, that did not include green zippers.

Lin- good to know. My nearest JoAnns is 60 miles away.