It's been an adventure! I'm way behind schedule, but I'm going to adjust that and keep going after a day of rest.

Connie took me to the South Trailhead on Sunday morning. 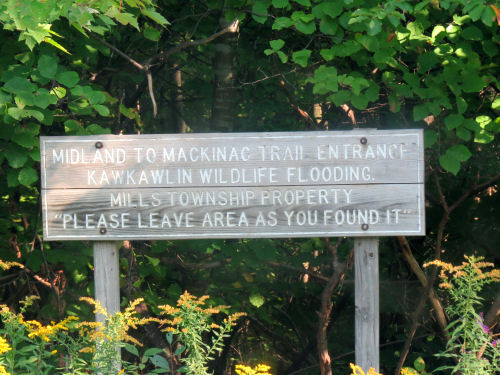 Had to take a picture of the last time these shoes would be so pristine. You should see them now. 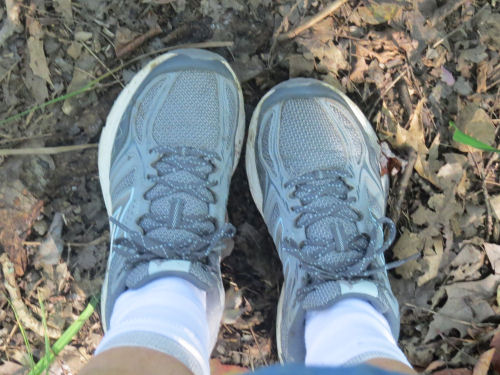 Little hints of fall in the foliage. 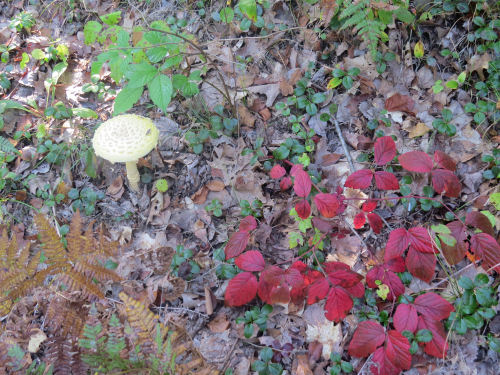 Here is the DNR trail marker. Most of the trail is marked with blue 2 x 6 rectangles, just like the North Country Trail, but occasionally there is one of these with the Scout emblem on it. 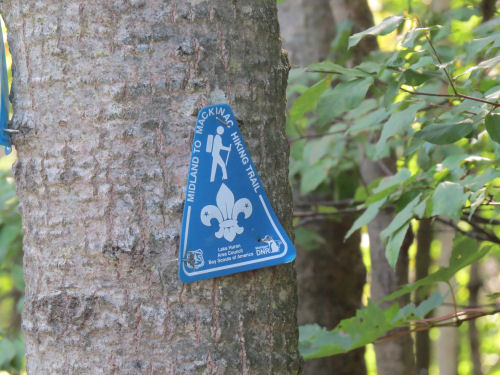 And what was the trail like that slowed me down so much, you ask? Well, here's a trail picture. See the trail? Got any more questions? I was doing a lot of what I call bushwhacking between blazes. Usually I could at least see the next blaze, but sometimes not. Since I don't like wandering aimlessly in the big pack, that meant taking it off, making sure I knew where it was and then searching out from the last known blaze. I have some flagging tape with me, so if I'm getting out of sight of my landmark I can put up a temporary marker to find my way back to the pack.

And the footing was pretty bad. A lot of the land must have been planted with trees at one time because there are all those irregular rows made by a planting machine. That means you are constantly going over humps and down dips, which are hard to see under the ferns and blueberries. Had to be careful or I would have turned ankles even more than I did. The ferns were often as high as my shoulders. All this brush also makes each step take about twice the energy you would usually need to walk a trail. 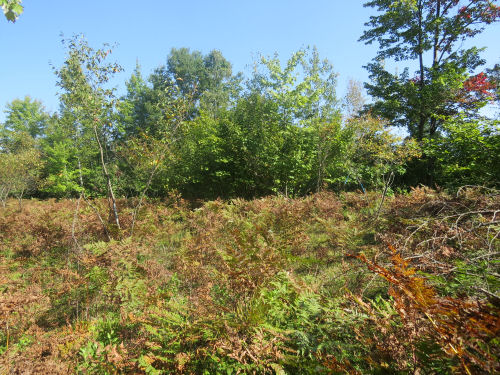 The first day I made my goal, hiking to just past the Molasses River. Long day, but I got it done.

The second day, I had planned to make it past Secord Dam. The going was so tough that by 3:30 I was so tired that I knew if I went on I'd be too tired to set up camp properly (most importantly to hang the food bag). As it was, I ate a cold supper. I just couldn't talk myself into getting out the stove. One nice thing during that day was that Connie and Jerry did some Trail Angel stuff. They left a cooler with ice cold water for me to find. I knew I was hot, but Connie said it got almost up to 90. 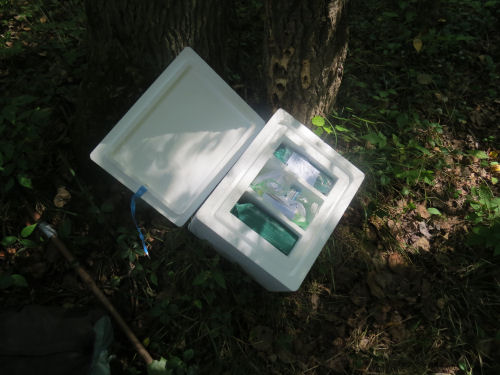 I stopped at what I thought was Tea Creek for the night, but it turned out I hadn't even made it that far. No matter, I had water and a dry place to put the tent.

This morning, I went past Secord Lake and got water and had a lovely mosquito-free break. 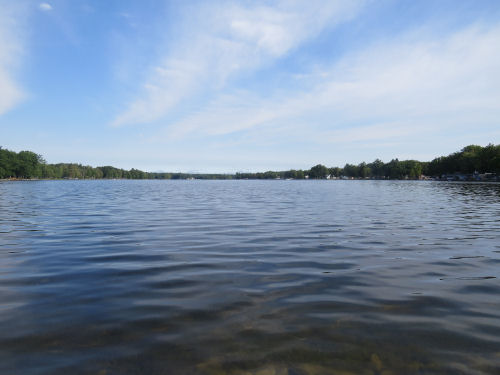 The Secord River below the dam is beautiful too. 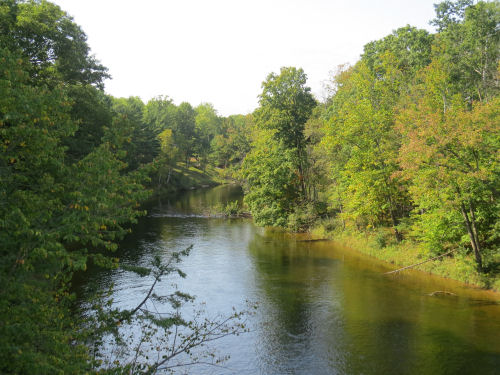 So today, I was supposed to make it to Elk Lake. Ha! I started hiking at 8:45 am, and passed where I was planning to camp the night before at noon! I called Connie and Jerry, and arranged for them to pick me up tomorrow, so I could rethink my plan.

Before long, I approached this. See the open water in the middle? See the broken birch with a blue blaze directly across the middle? 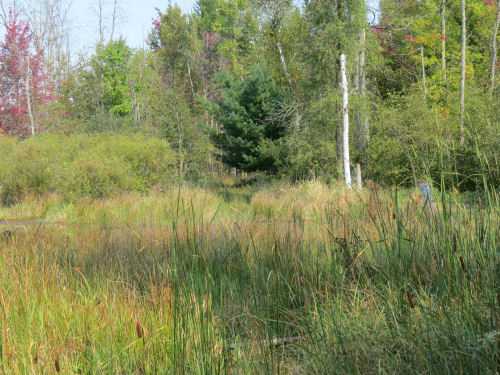 Hmmm. so I managed to find a way around it without getting wet any deeper than my knees (without the pack). When I got to the birch, I discovered there was a mowed trail right beside the pond that didn't extend quite far enough for me to see. Ha! So I easily walked back to get the pack and then got around that pond.

Meanwhile, Jerry had given me a tip that he'd marked some places on fencing where I should slip through onto private land because I'd never get through a swamp on the trail. I did that, found it all just fine.

Had to stop and hunt for the trail again. Finally found it, but it was turning south, which was completely wrong. I turned around and went back twice, but couldn't see anywhere else to go. And I was following a clearly blazed trail.

Went past these very pretty ponds. 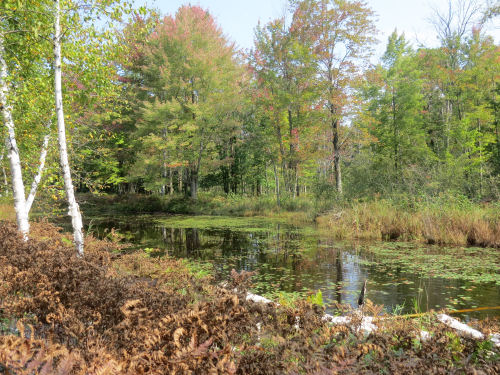 Then I came to the water feature that did me in. The trail led into a beaver flooding that was easily 100 times larger than that pond I went around earlier. Wow. Blue blaze right out in the middle. Well... what are you gonna do? I headed across and was soon in water mid-thigh, lots of mud. Not too safe with 30+ extra awkward pounds. But I made it to the tree, and I could see where the ground was higher ahead. I was halfway. So I slogged on. Got about 3/4 of the way and there was wide, open water. Nothing to be done but go back. Fell down three times in there, but kept the camera and phone dry.

I got out of the swamp, flopped down and called Connie and Jerry to see if they could rescue me. (Here's the joke of the day... I had the best cell reception anywhere on the hike sitting by that big swamp.) They could and they did. Well, it turns out that this was old trail, and I had turned around and was headed back to the extended beaver area where the pond was. I've talked with Jerry about it all, and we think we have identified where I missed the turning for the new trail, but if I saw a blue blaze, I certainly didn't look around for an alternate one. Those old blazes will be blacked out soon!

So the adventure will continue, but on a different time schedule. Stay tuned

You are awesome, Joan! Keep on keeping on.

Well, good for you for not giving up completely!! I'm sure you will be able to walk to entire trail at another time!!

That sounds like a rough 3 days. I hope the rest of the hike is easier.