Today I got to slack pack- just a day pack instead of the big one. That did not mean the day had no adventures.

First, Jerry and I went and walked in to where I had gone the wrong way yesterday. There was absolutely no way I could have known where I went wrong. He had figured out exactly where it happened while we were talking last night. However, the new blaze could not be seen at all from where I made the mistake, and the old blazes leading south were clearly visible.

Jerry sprayed them out with black, and we added new blue blazes which made the correct way to go really clear! 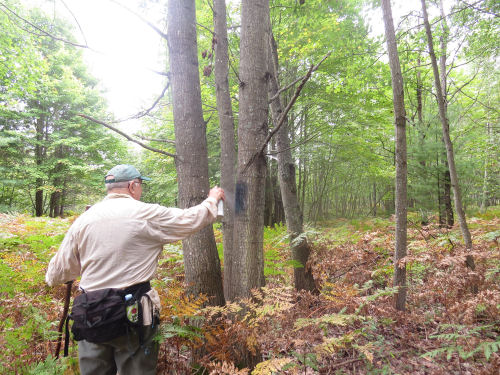 Saw a plant I can't identify. Will have to work on that when I get home!

So that was a total of 2 miles walking with 1 mile of forward progress on the trail.

Jerry said the next section was terrible and he was going to walk through it with me or I'd never find my way. I think he was right. This is the trail. 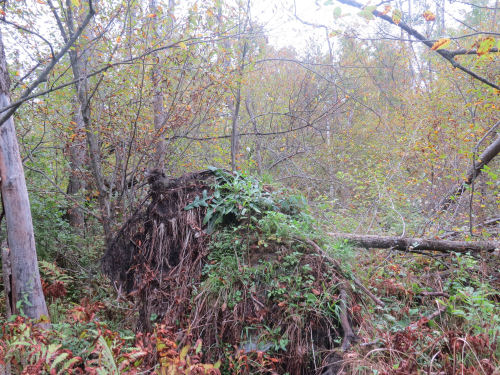 He did a little trail work, but there is a big group of Scouts coming in a week to do maintenance here, so mostly he left it for them. 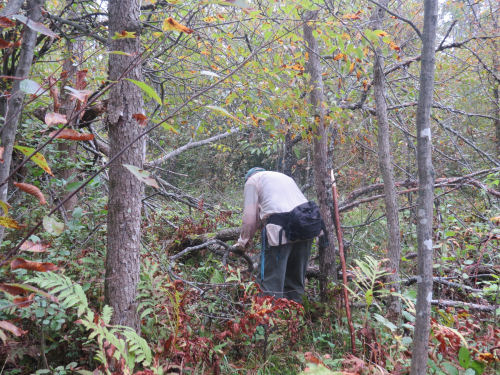 Let me say that I am very glad Jerry was with me. I'm not sure I could have found it alone. Working together we usually managed to find the next blaze and stumble to it, but it was a real challenge. Jerry promised me a bridge across the Tittabawassee River, and he delivered. 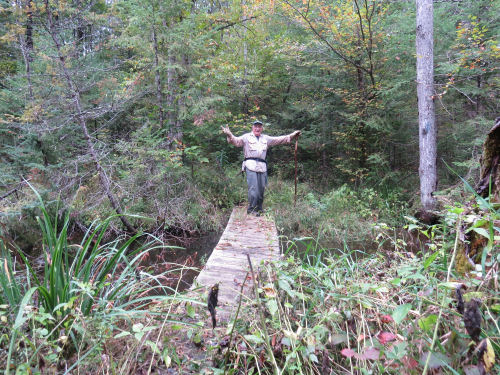 There was even a trail flamingo! 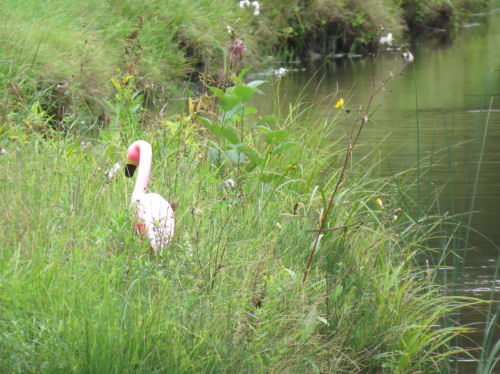 That was 3.5 miles (now the day's forward progress is 4.5 with 5.5 total walking), and we finished at 2 pm at the roadside park on Route 30. That was going to be my water stop yesterday. I think I need to stop pointing out how far behind schedule I am. Clearly that schedule was unrealistic.

So, I guess I never learn. I thought I could do 4.5 more trail miles in the afternoon. Jerry said the Scouts had just blazed it 2 years ago, but he wasn't sure how much deadfall was down across the trail. I said, "no problem, if there are blazes I can walk around trees."

For the first mile, the trail was great. A few trees down, but no problems. 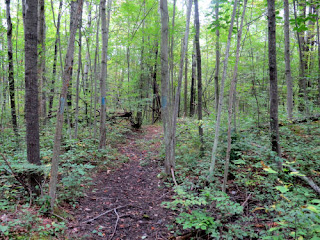 I found a wonderful wilflower that I'd never seen, although it's considered one of the most lovely. This is fringed gentian, Gentianopsis crinita. (So, if you know me, this trip is now officially a success with not one, but two new plants.) 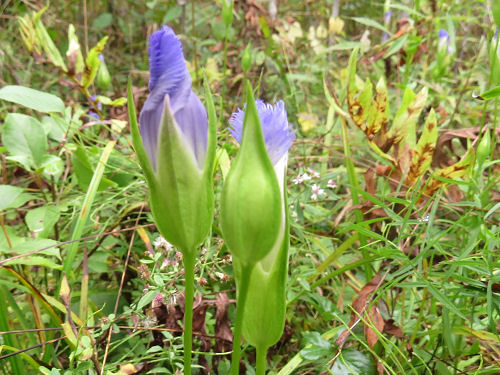 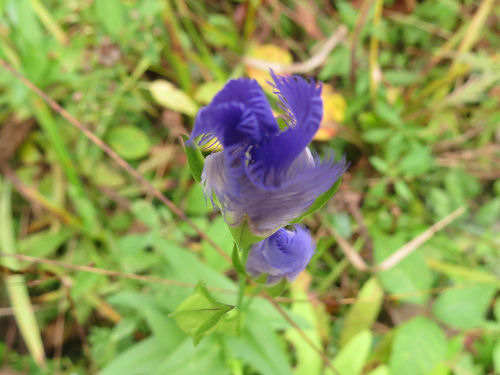 Then... well... I came to this. Does the double blaze on the post mean to turn? You would think so, but there was absolutely no place to make a turn, and certainly no blazes. And then, there's that blaze straight ahead. It leads you into the clearing you can see with all young aspen trees beyond. I'll tell you about the yellow arrow later. 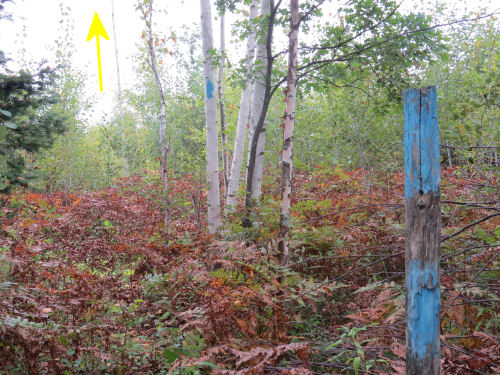 So I explored across the clearing in many directions. Couldn't find anything. Um... real bushwhacking time. I could hear Cedar Lake Road traffic on my left, and Boman Road was ahead. As long as I didn't drift off to the east too far I couldn't get lost.

Well, I stumbled and fell and followed my nose for 40 minutes, thinking that the trail had to be to my left and I'd run across it again. And I did! Saw another of those double blazed posts and a blaze I've circled for you far ahead on the left. 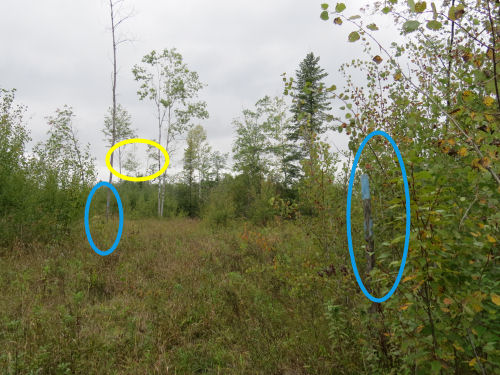 It was mostly on an old wet raised roadbed full of woolgrass. Not such a pleasant walking experience, but at least I had blazes now and wasn't pushing though blackberry and downed trees.

Pretty soon... the old maxim about people walking in circles came true. I was right back at the post and blaze I showed you above. And... I didn't realize it till I looked at the pictures, but see the odd treetop I've circled in yellow? I'm quite sure that's the same tree I've put the yellow arrow beside. Good grief! But I wasn't expecting to come back to that spot, so I had no clue exactly where I came out of all that aspen.

"Forget it," I said. I bushwhacked out to the road, wading another swamp (although this one was much safer with only knee-deep water and a solid bed instead of muck).

After an hour of bushwhacking I was still only a mile from where I'd started at 2:20pm. It was now almost 4:30 and my car was 5 miles away (which means that trail section was longer than 4 miles!).

I could have found the next road intersection and gotten back on the trail, but I decided it was a little late in the day for more adventures. Walked back to the car, and came back to Connie and Jerry's. But I think I'll count the bushwhack adventure as 2 miles of trail through to Boman Road. Now I'm at 7.5 trail miles and 8.5 miles of walking, except I have to get to the car. Make that 13.5 miles of walking for the day. 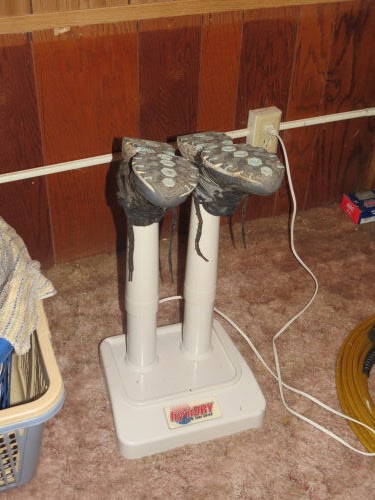 Not a pile of infected worms... soaking socks full of sticktights! 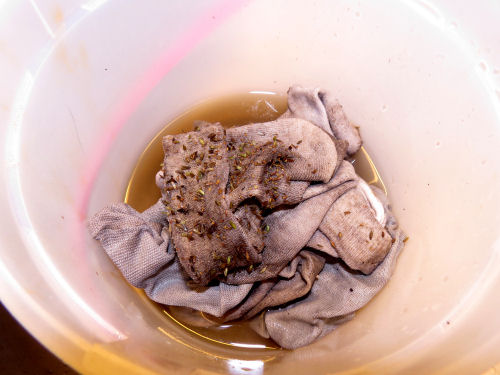 Tomorrow is really going to be a day off. 100% chance of thunderstorms. Reworking the plan.

You're running into all kinds of obstacles on this trip. Hope the rest gets easier.