For starters, this was the scene this morning. OK, it didn't last, but snow is getting a little old. I do remember snow on my birthday a few times in my life. 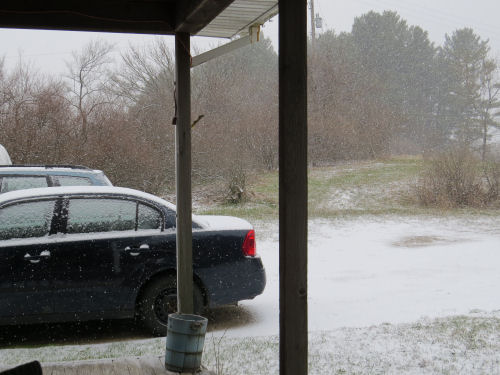 It's Earth Day! I remember the very first one. Somewhere, I have a patch of the flag that was designed 50 years ago. It got separated from my patch collection somewhere along the line. I hope it eventually resurfaces. It looks like this one. 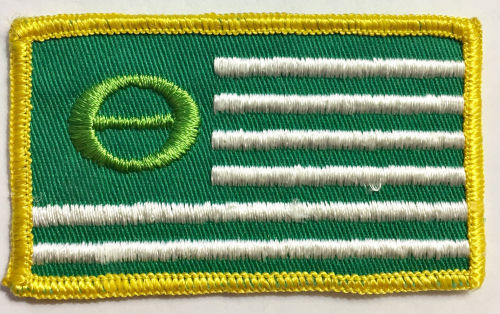 It's almost my Birthday! The big news of the day is that tomorrow and Friday are supposed to be fairly nice. Since Friday is my birthday, and I've gone on a hike for as many of my birthdays as I could manage since about 1990, I'm heading for the woods. All the gear had to be checked. That takes just as long for an overnight as it does for a two-week trip. And I wanted to do at least one tweak.

Last time I saw Marie, she had just purchased a new sleeping pad. She let me try it, because she likes it a lot. I don't care for it very much, but what it did have was an attached pillow. Now that feature caught my attention. I've always used my sweatshirt for a pillow, but it isn't too satisfactory because it slides away or unfolds and gets too flat. So, I designed a solution. I made a little pillowcase that attaches to my pad. 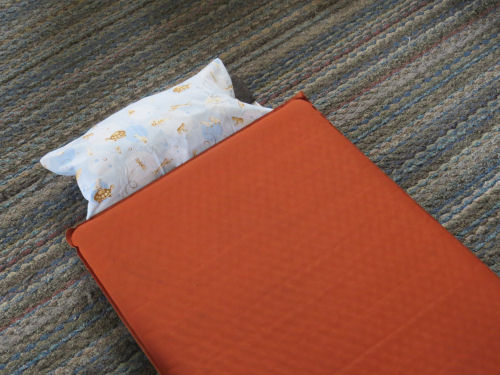 My new sweatshirt/ jacket slips inside it, and two spots of velcro hold it to back of the pad. I think I'm going to like this a lot. My very first concession to getting older was to start using a sleeping mat. My hip bones were getting sore. And you really need one when camping in the cold, for insulation. I'm calling this pillow fix my next concession to my age. My neck does not like it if it doesn't have just a little bit of pillow- it doesn't need much, but when I'm camping and the "pillow" disappears and my head thumps down even lower than the surface of the mat, I end up with a stiff neck. I think I'm going to like this. 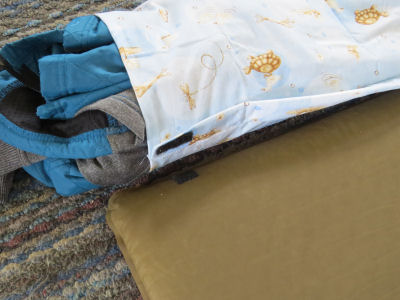 Then I had to rustle up enough food for two days on the trail. No big deal, and I managed it without a trip to the store. Packed up Teeny, and weighed in. Total weight with food, water and everything is 24 pounds. That is great! Of course, the more days you add to a trip, the more food weight there will be to start with. But this is very manageable.

I could have chosen a better background, but there was too much light when I tried to do it with the view off the deck in the background, so you get what you get. (Taken with timer.) It looks like the load is poorly balanced, but it feels fine and the weight is on my hips (those pants come up really high). These newer lightweight packs just don't have much shape to them. And I've got my jackets stuffed in the back pocket so it sticks way out but there's hardly any weight there. 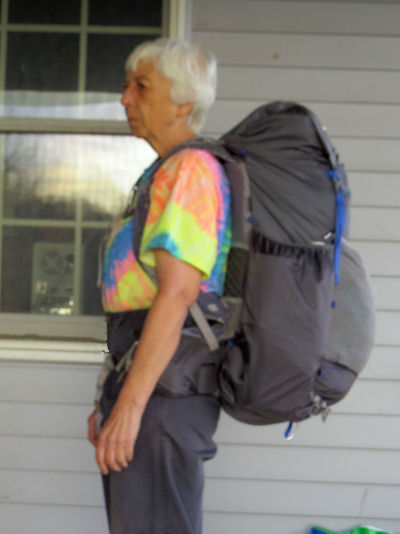 I'm heading out in the morning, and won't be home till Friday afternoon. Not a big deal, just one overnight. But it's likely there won't be a blog post tomorrow. I also placed an order with Amazon. Mostly some stuff for around home, but two backpacking items that will add a little weight, but lots of functionality if they work.

The picture does make the pack look pretty heavy. Good idea with the pillow. I don't know if I could sleep on the ground any more. I would probably not get back up in the morning...lol
Happy early birthday

Happy birthday - what a great way to celebrate. I love the pack and the idea of hitting the trails. Enjoy!

I prefer sleeping on my pad and in my sleeping bag to a too-soft hotel bed any day. Have a great time, Shark.

I like the pillow idea, and I agree that at this age (20 years ago for me) a sleeping pad is necessary. Hope you had a good hike.