I went out and did another half mile of blaze refreshing on my section of trail today. Was hoping to hike a bit after that, but it was raining, and I didn't feel like getting soaked. So I went home. But my primary goal was accomplished.

Painting Trail Blazes 102 is going to just talk about some of the points involved with re-blazing a section of trail. Oh, and a couple of tips. The tips first- It was actually a perfect kind of day because it was warm enough to paint, but it was also cloudy. When you are constantly reaching up as high as you can and looking at where you are working, if it's sunny you'll have the sun in your eyes at least half the time. Cloudy is good.

Tip #2- for what it's worth. You might like some kind of eye protection. The bark chips off when you scrape the trees and goes flying. Right into those eyes you are looking up with.

So, my section of trail has had a lot of small trees die. And a lot of those trees are ones I had used for blazes. Another problem is a result of that. More sun has come in and young white pines are growing up between the large trees. In some cases, large trees that I had previously blazed are now obscured from view by the young pines.

The upshot of all this is that I had to move a lot of blazes. I painted new blazes on quite a few of the young pines. They may be bent or broken next winter, but one has to put blazes on something!

First let's talk about the ones I didn't have to relocate. Here's a nice new blaze painted over the top of an old one. 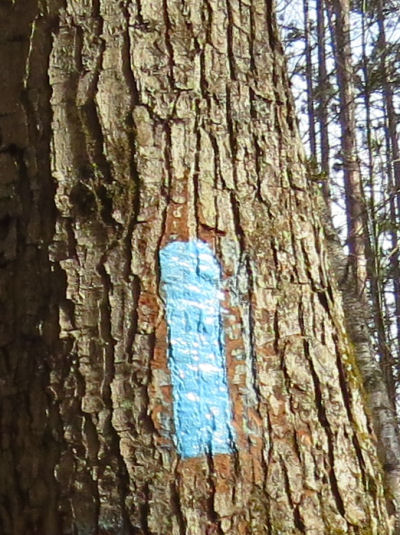 So, did I just slap some more paint on top of the old blaze? No! That is the way to guarantee you'll just have to be out here doing this all over again in a couple of years. See how the bark around the blaze is smooth? First, I scraped off all the loose paint and bark. Because I hadn't done it in a while (6 years, if you recall), by the time all the loose stuff was off, here's what a scraped place looked like. About the only blue still showing is in the crevices between the plates of the bark. And sometimes those bark plates are nice and vertical and can help you format the blaze. 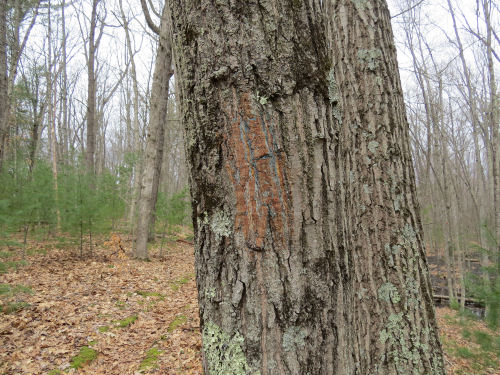 Now, let's talk about placement and dead trees. When the trail twists and turns through the woods, sometimes it's hard to find a tree that has grown in just the right place to be visible without being too close to the last blaze. The tree with an arrow pointing to it was a perfect one, and I had previously painted a blaze on it. 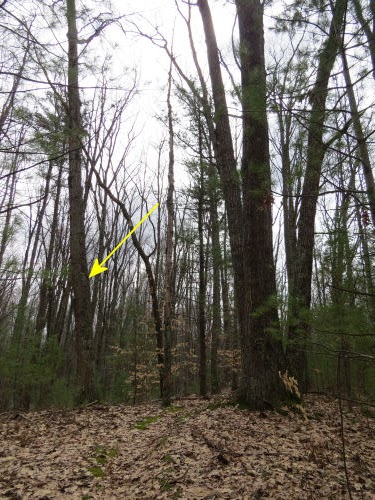 But when I got closer, look what has happened. It's dead. Not only dead, but with loose bark. The arrow is pointing to the faded blaze. Here is where I make choices. Sometimes, I'll strip off the bark and paint the dead tree anyway because there just isn't much of anything else in a good location. But, it's going to fall down long before the blazes on live trees need work. In this case, I was able to move the blaze to the larger, live tree on the right side of the trail. But, remember that it's all about sight lines. I needed to be sure a blaze on that other tree could be seen from the previous one, or at most a few steps beyond it. It was OK. 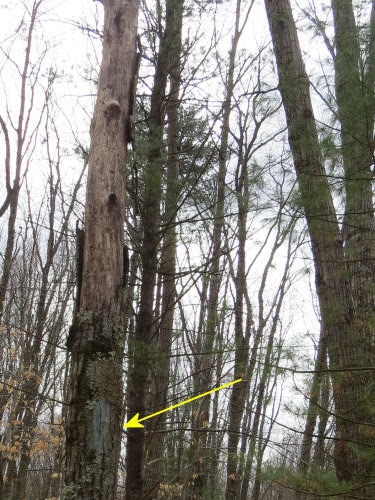 Here's a tree that I didn't realize was dead until I began scraping it. The bark looked tight, but it scraped too easily, and the wood underneath was even punky. Don't even think about bothering to use a tree like that! In this case, you can see that I moved the blaze to a smaller, younger pine just beyond it and to the right. 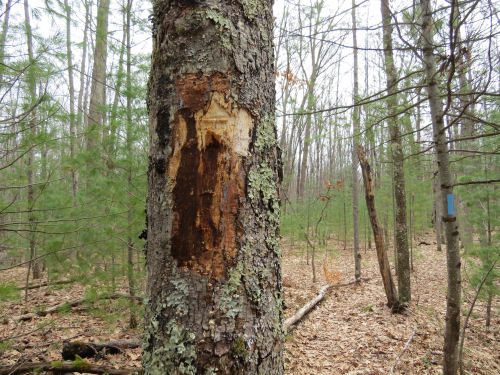 This tree was dead with completely loose bark. When I peeled it, it came off in big chunks with the old blaze intact! I had to choose a different tree for this one too. 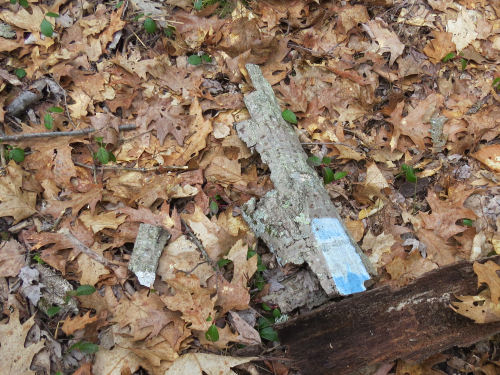 I said this in section 101, but I'll say it again. Don't go for the easy "slap on some new paint and call it good" attitude. The blaze is only as good as the bark on which it is painted. Loose bark= blaze that's coming down before its time.

That said, I was thinking that when I finished my section I might offer to help someone else who doesn't want to paint. But I may be approaching "had enough" for this year. I have one more day of blue, and then two days of white blazes on a spur trail to do just on my own section yet. We'll see how I feel then.

Don't forget that your scraper is your eraser. Don't leave old blazes on the trees that don't "work" any more. Scrape them off as much as possible. That's why I pulled down that one on loose bark. And if you make a big glob that makes your blaze too big, use the scraper to remove that too.

And... if you are painting a live tree it's good to err on the side of too narrow rather than too wide. As the tree grows, the blaze will spread and get wider and wider!

Hey! I do have an answer to that star shape on a cut tree from yesterday. My tree-savvy friend Robert explains, "That cross-sectional cut went thru a node from which the branches 'blossom' out." Makes sense! Why didn't I think of that? 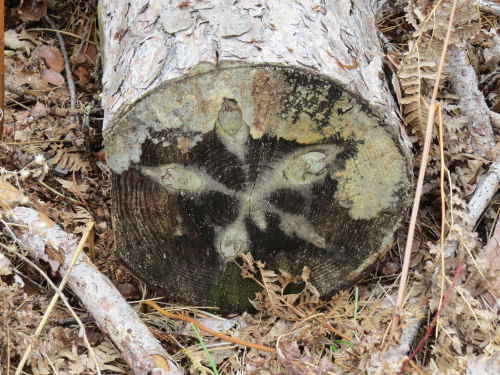 Oh! And I heard Chorus Frogs and Spring Peepers. They were slow and lethargic, but they were awake!

Interesting process. In the one picture, and I'm sure it's just the angle, the blaze looks etremely high in comparison to others. Is there a standard height that you paint these at?

HI Ann- Usually, I try to put them as high as I can reach, since I'm short. But no, there is no specific height- as long as it can be seen.