I thought I was going to finish Ivanhoe today. Guess not. It's a really long book. I thought there were 31 chapters. Turns out there are 44. It only felt like it was coming to a resolution because it is the ending of part II. Perhaps the volume we had in the house when I was a child was abridged, because it certainly wasn't this big.

Here's a cover from an illustrated edition. 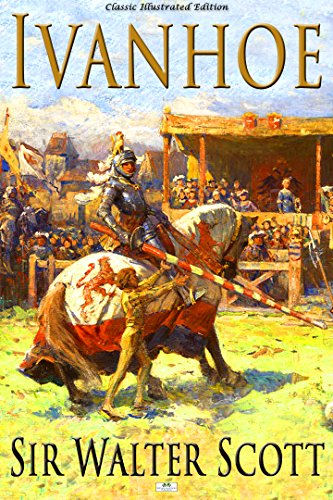 So, I'm learning and/or re-learning a lot of words pertaining to medieval warfare and getting perhaps a bit more British history in my head. One of my favorite movies is The Lion in Winter, and in that, the four sons who are trying to do each other in to obtain the throne are Richard (who became Richard I, the Lion-Hearted, the crusader), John (who became King John of Magna Carta fame or infame), Geoffry and Henry the Young. Ivanhoe is set when Richard is just returning from the Holy Lands and John has set himself up as ruling prince, but without much authority to do so.

Here's a hoot. The name, Cedric (which is no longer used much, but certainly familiar), one of the heroes of the story, was a made-up name. Sir Walter Scott may have based it on a known given name of Cerdic. The name, Ivanhoe, is simply a fanciful interpretation of Ivan, or John.

Scott did a lot of historical research and is often credited with reviving popular interest in the time period. The book is set around 1190.

It was published in 1819. The reading is a bit of tough slogging, only because it's very wordy by today's standards. Well, that and the same reason I don't like Shakespeare. (Yes, dramatist, moi, does not care for the Bard.) And it's also the reason I don't care to read the King James Bible any more. The language is just difficult.

So, I'm about 2/3 of the way through. But, dadgummit, I'm going to finish this book rather than give in to reading a summary or watching the movie. (I may watch it after I finish reading). Have a sunset. 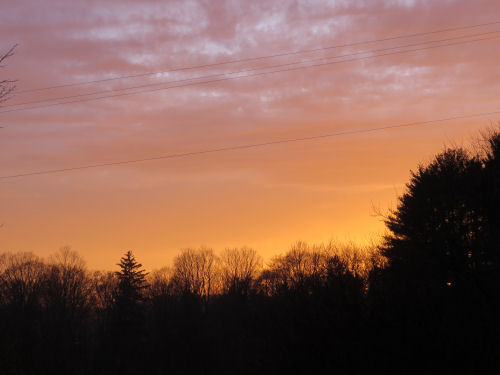 In other news: I wrapped some books and walked to the Post Office to mail them.

I don't think I would make it through a book like that. Trying to follow along with a book that's written with a different language is difficult for me. I tend to read sentences multiple times trying to figure out what they are talking about.

Lulu: "Our Dada hasn't read this one, but he says he has seen the movie!"
Charlee: "Based on this write-up, he'll probably leave it at that!"