I'm not sure how long it's been since I made English Muffins. More than 12 years, because they were not in my master food/calorie spreadsheet we made after Om had his heart attack in 2007.

But, I got a hankering, and we have flour because I always keep extra (apparently everyone is now making baked goods at home because buying flour is a pipe dream).

The recipe was still in my notebook, so I didn't have to hunt for it. They are a tiny bit fussy because the dough has to rise three times, and then you have to baby-sit them on a griddle. 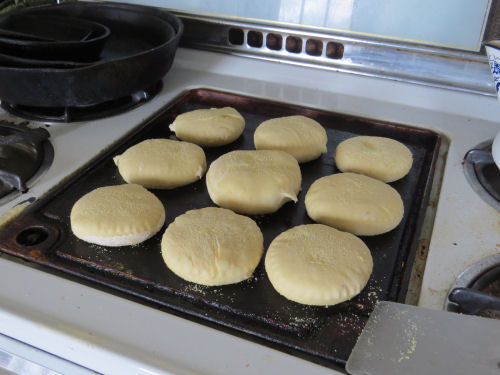 How do you think they are looking? 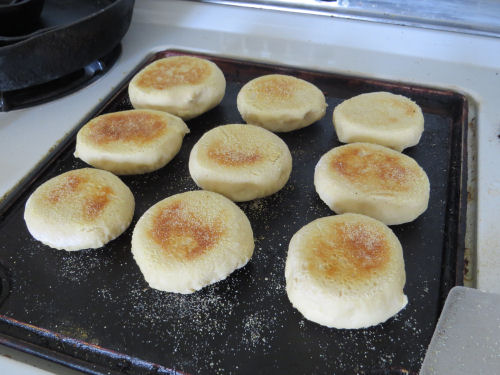 How do you think they taste? 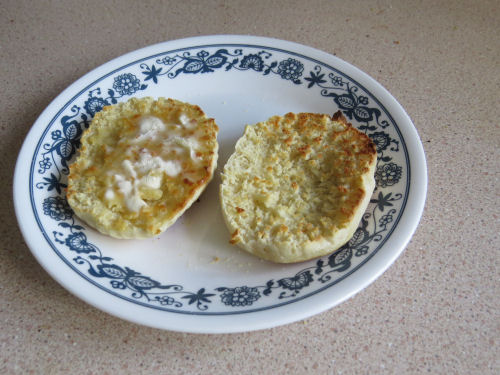 The answer is "yummy." We made a house rule. No more than two per person per day. We are determined not to gain a ton of weight just because eating is an easy thing to do. And I would be a carb junkie if I let myself.

It's really interesting that you can take the same 3 or 4 ingredients (flour, yeast, salt, and maybe some oil or butter) and turn it into so many different kinds of bread that do taste somewhat different. At least they certainly have different textures.

Anyway. I've finished Ivanhoe. I want to watch the movie, but maybe not just yet. I've kind of had enough of chivalry and fair maidens for a while. Not my preferred genre although I don't dislike it.

Om went to the store during senior citizen hours. He ended up going to three stores to find a few things he wanted that haven't been available for weeks, but he did come home with everything. He said there were fewer people than during the main part of the day. So, that's probably good. He's certainly higher risk than I am.

How do I think they look? I think they look delicious and exactly like the ones you get in the stores. I like English muffins.
Around here it's become almost impossible to find yeast. We haven't been able to get it in in a couple weeks.

I do not know about the Ivanhoe movie but my general rule is never see the movie after you have read the book.It is almost universally disappointing. Your imagination is superior to film interpretation. Note: I have not read Ivanhoe or seen the movie so this may be an exception.