Another Puzzle, Another Bad Accordion Joke


I finished another jigsaw puzzle yesterday. This one is called "The Music Room," and it has about 100 different instruments on it. There were several I had not heard of. It was surprisingly difficult, but not frustratingly so. 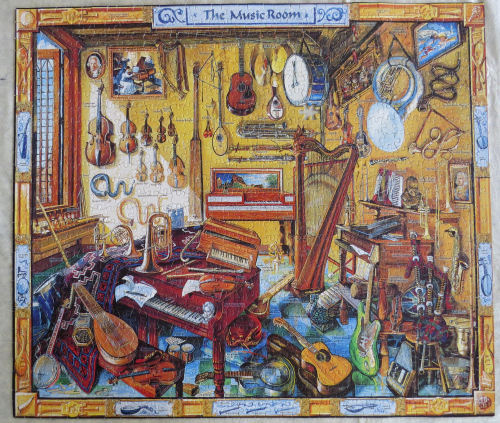 I learned the long squarish one is called a Tromba marina. Yes, that means marine trumpet, but it was a one-stringed instrument played with a bow. The base is a tall hollow bell and it gives off a sound much like a trumpet that was used to speak from ship to ship. The string was only lightly touched to produce harmonics. It was used from the 15th to 18th Centuries. I'm going to just tell you about this one because is it SO interesting.

Here is a video of a modern recreation of one.

And here is a real piece of music played on one. The instrument shown in this video has two strings which was apparently a sometime variation. I like it!

And the bad accordion joke? The accordion is upside down! What the heck? I know most people don't like them, but the artist couldn't even picture it right side up? 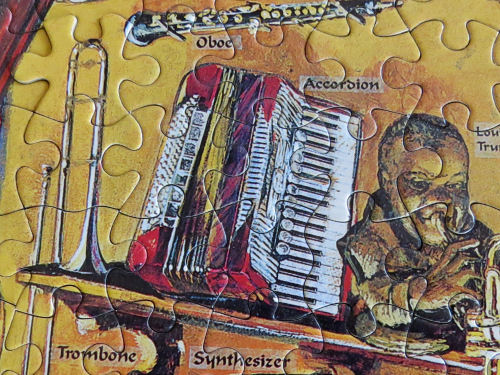 In other news: I did errands (some will have to wait because it was Memorial Day), shopped for groceries, and worked on beta reading a book for an author friend. Tomorrow, I do the final little bit on the roof. (Had to buy one more bundle of shingles, and I treated us to a new wheelbarrow that isn't coming apart.)

The sound coming from that tromba marina is amazing. I never would have expected it to sound like that. Very interesting.