A whole lot of things have transpired since I first ordered maps for a potential hike in December 2019. The big one, of course, is all the restrictions due to the virus. Another big one for me is that almost all my vendor events have been cancelled, which turns out to be a very good thing for the hike plans, because I can push the hike into June.

Meanwhile, back to maps. I had thought there was a longer trail in Indiana than I had gotten maps for, and the answer is that there is and there isn't. I got maps for the Knobstone (the southern piece), and the Tecumseh (northern piece without realizing it was considered part of the Knobstone), but not for the Pioneer section (the middle piece).

The Knobstone Trail is about 160 miles long, but the center section is largely road walk. I ordered the complete map set for it, which is what I got in the mail yesterday. I've decided that even with the road sections I am going to do this entire trail. I like being able to say, "I did the whole thing." I like that I won't have to figure out too much car spotting and moving around. Camping places are also easier to determine.

Here is about a third of the maps that I've been working on today. Even with the maps and guide coming from one source, they aren't all at the same scale, and the text is so small and blurry I literally can't read it without a magnifying glass. So, I'm putting them all on USGS topo base maps in the same scale. This is what I've typically done for backpacking trips. I add notes to myself and road labels and all that stuff. There is also a data book, which is not fleshed out very much, but it does have critical info about water sources and legal campsites. 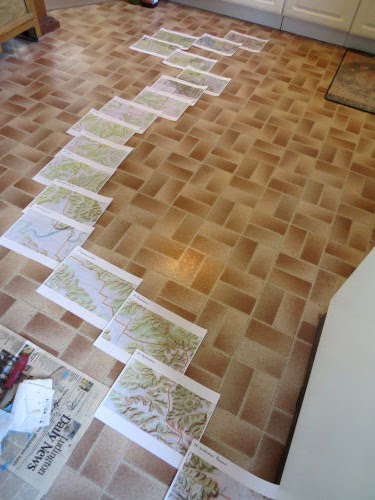 Here are three map sections where there is real trail. The message here is hills. This is going to be a challenging hike. I think I'm up for that! 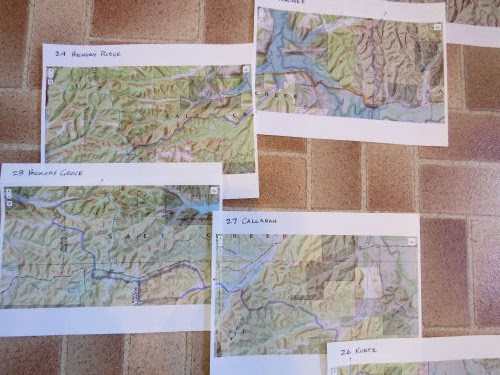 The Indiana DNR is currently saying that they are tentatively opening state land for dispersed camping on May 24. Hopefully that will be accurate, because I need this to be open. A big chunk of the Knobstone is in Indiana State Forest. Hiking in June is looking good.

Now I'm getting excited! Maps will do it.

There's another map milestone today too. I know, it's kind of a "who cares" moment, but I moved to a new map in my one online game I still play, Diggy's Adventure. I went from Atlantis to Greece. As new "mines" open up, this map base will be filled with the places I've visited and cleared. I've been playing this game for 3.5 years. I'm still enjoying it.

In other news: Hmmm. Nope. I worked on maps.

Well seeing as how this hike spans from one end of your kitchen to the other, I think I could handle that one....lol
Hope all works out well with the camping

Maps are so much fun.