Gyromitra are all false morels. Mostly they shouldn't be eaten. Some people are apparently able to tolerate the ones that are sometimes called "beefsteak," but now that the chemistry is better understood, I'm sure not trying any of them.

This one is probably Gyromitra esculenta, often called brain fungus. You can see why. In some places people eat these after boiling thoroughly. But they release volatile hydrzines which can affect the liver, kidneys and central nervous system. This picture was taken May 2. 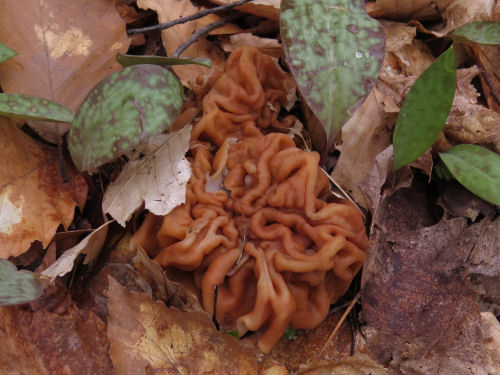 This one is probably Hooded False Morel, Gyromitra infula. I have to say "probably," because I'm not good enough on mushroom ID to know what to look for. I should have checked to see if the stalk was hollow, solid, or full of filaments, taken a spore sample, etc. But I was hiking, not botanizing. Sometimes it develops an interesting shape that results in the common name of elfin saddle. Picture taken May 4. They usually fruit later in the season, but it's not unheard of to find them in the spring. 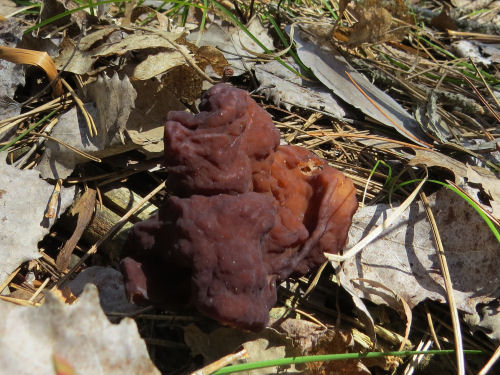 And here's another. Or another one of the same thing as one of the above. As you can see it's lighter in color than the G. infula, and not as convoluted as G. esculenta, but that doesn't really mean anything. They have a range of colors, and they darken with age. I didn't even look to see if this one had a stalk. Picture taken April 24. The dark one above did have a white stalk.

But, you are safe to just call them all false morels. You are probably a lot less safe to eat them. Less safe than going out in public in these days of the virus. 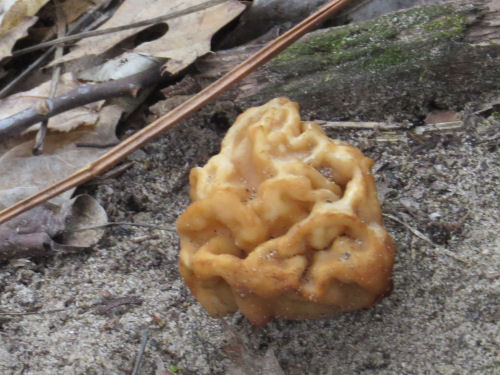 In other news: I worked on one of my many projects in the morning, and then switched to hiking maps in the afternoon. I finished the maps, and have now started redoing the Data Book for the trail to make it more useful.

Posted by Sharkbytes at 8:03 PM

I don't know enough about mushrooms to feel safe eating anything that I would find outside growing. I'll do all my mushroom picking at the grocery store

Been a long time since I've picked morels in the wild. A very long time. They were very good.