There were any number of things I should have done this afternoon. Did I do any of them? Nope.

This is the one day yet this week when the temperature was going to be tolerable for anything other than sitting in front of a fan. So I figured I'd put off the "desk" work, and go for a bike ride today.

I chose a 12-mile road loop with about 7 of them on dirt. I knew it was all at least moderately shady, and only one of the paved roads was straight.

The route started right out with a crossing of the South Branch of the Pere Marquette River. 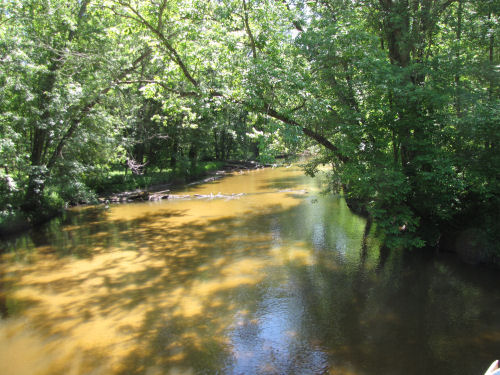 To make the loop work, I had to follow Wilson Road east and then find the main two-track southeast, which would be Aspen. I had no delusions that it would be marked, but hoped I could figure it out, and I did. The sand was very loose on Aspen, and the riding was difficult. In fact, I had to walk the bike a few places. Maybe someone stronger could have kept riding, but I can't keep the speed up enough in the deep sand.

Aspen seemed to go on forever, and I thought maybe I had gotten on some other road, but eventually I did come out on Walhalla Road (where I knew Aspen had a sign), and it was that road.

Walhalla is the straight paved road, but even it had moderate shade. Soon I reached the southern end of my loop with another crossing of the river. 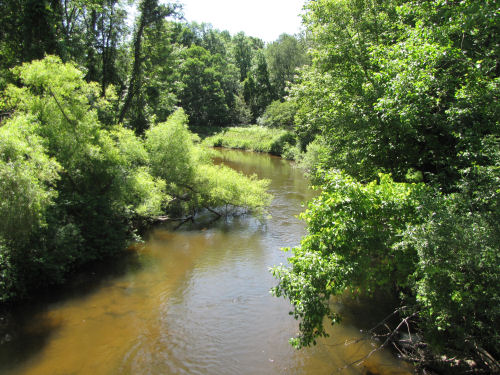 Soon after that, I turned east on Hawley, also paved, but with nice curves. Another 2.5 miles, and I turned north on a dirt road called Indian Trail. It had a much better surface than Aspen, at least at the south end. 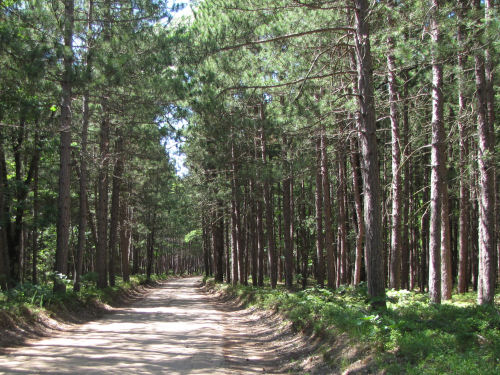 Along this route I watched a fledgling blue jay testing his wings. Mom was having a fit from a nearby tree, but the little one didn't care much about me at all. He fluttered along the ground a bit, finally managing to get up on a log. After a long rest there he took off and crashed head first into another tree. No worries, he wasn't going fast enough to get hurt. I left him to his lessons. 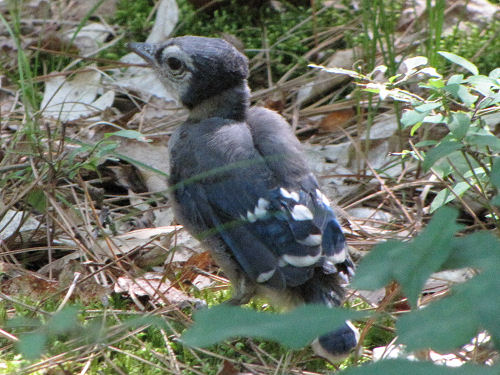 The final mile of the ride had loose sand again, so I had to walk a short section. I arrived back at my car in two hours. It was a great ride. I would call it moderately hard, because of the loose sand. Not sure I'd do it again for the same reason. I'll probably look for another interesting loop.

Tomorrow, I have to buckle down.

Must say, you have your priorities straight. I should have walked last night with my husband and dog, but was attached to the computer trying to get my book reviews up on our blog and on Shelfari and Goodreads. It took way longer than usual because we both finished books at the same time and I kept getting some unresponsive script message every 30 seconds it seemed.

You certainly pack a lot of neat things into your days.

Jays look so funny at that stage; but he has a good start on life!

sometimes you need to have a day like this. Glad you had a nice ride and got to see the fledgling blue jay testing his wings

Karen- reading is good too!

Chuck- i try, but I should be working harder on the money-making parts

vanilla- They really do- like some sort of Greek drama mask

Ann- I probably take too many days like this, but I'm beginning to not care (until the bills come due)