Another Ride on the White Pine Trail - LeRoy to Reed City


Om and I headed out for another bike ride on the White Pine Trail today. This section was from LeRoy to Reed City, and was not paved. We knew this ahead of time, so Om borrowed a mountain bike. His road bike wouldn't have been any fun on the gravel.

After a late lunch at Jackie's Place in Irons, here's where we started. 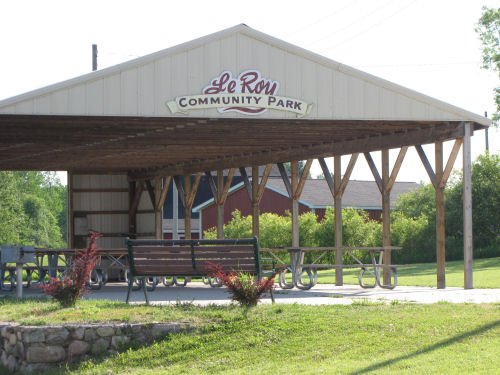 Contrary to my usual obsession with planning outings, we just sort of went and did this one. We didn't even know how far it was to get to Reed City. We just figured we'd ride some distance and then turn around. As it turned out, it was only a bit over 12 miles to ride the whole gravel section, so we did that (and back, of course). Here's the old train station made over into the Chamber of Commerce in Reed City. 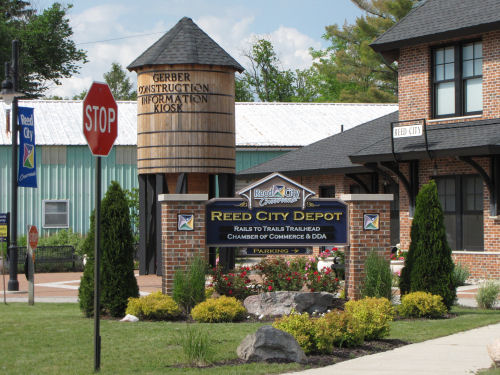 We wandered around town a little bit, and had ice cream at Pere Marquette Caterers. It's a bistro style restaurant/caterer. When we continue south on our next outing, we'll definitely include a meal at this place. Nice decor, great menu, reasonable prices.

This is one of my favorite things. At Reed City the former Pere Marquette and Grand Rapids & Indiana Railroads crossed. Both of those lines have been partially converted to rail trails, and so the trails cross there now. However, someone with a sense of history preserved the actual crossing as a centerpiece for the trail junction! The Pere Marquette line is defunct too, but sections of the line survive, including the Marquette Rail that runs in back of my house and I feature from time to time. 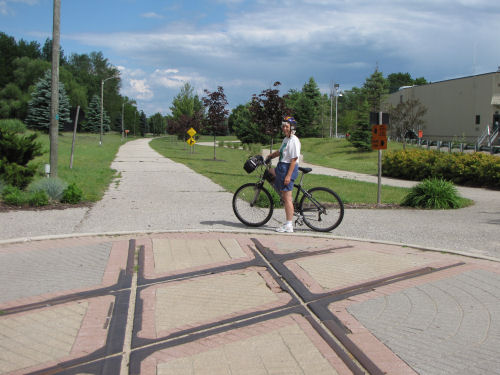 Om liked it, but was most enthused about the fact that our next section will be paved again. The gravel was pretty challenging. 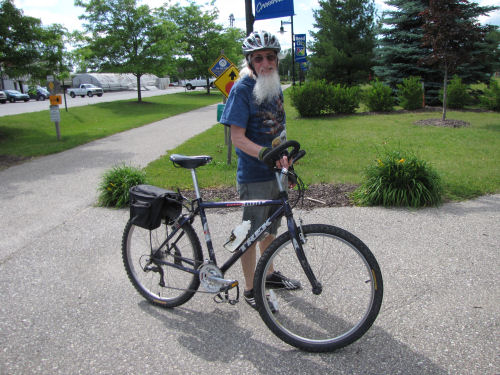 All in all, it wasn't a particularly interesting section. Quite a few miles parallel US 131, a freeway, and thus are noisy. Not many plants in bloom, and nothing unusual. This isn't really a complaint, just an explanation of the section. It was a great outing. The weather was Perfect (yes, with a capital P), Om and I found some things to talk about. I'm not even too sore, much to my surprise, since the longest ride I'd taken yet this year was six miles.

I did find one other artifact of the actual train line. This mile marker is still in place. But 305 miles to where? I think Cincinnati, Ohio. That was the southern terminus, and it's not nearly that far to Mackinaw City, the northern terminus. In its heyday, it was the longest North-South line in the country. 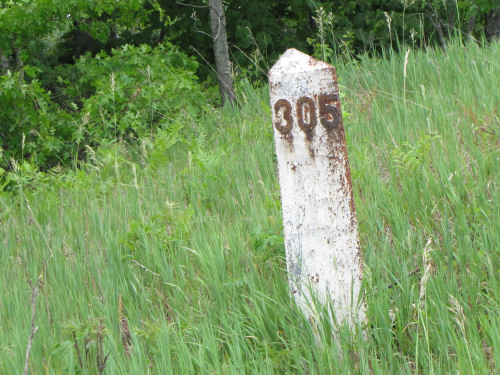 Links below to the sections from Cadillac to Tustin, and Tustin to LeRoy.

That was interesting. However what most interested me was the fact that you have perfect weather. Hooray! It will be here soon. Today it is blowing a gale. Flaming June they call this!

It's for days like that we live in Michigan. I enjoyed the trip with you today.

What a lovely beard!!

I remember bike riding at places like that when I was a kid. I was just thinking the other day how I missed that.

It looks like it was really a lovely day for a bike ride. The conversion of the train station seems very nicely done...I like it when old buildings are utilized in that way.