Just Missing the Mark (It's a Tradition)


Today is not quite the right day (off by a day). 50 years ago tomorrow, not quite Valentine's Day (off by a day). Not quite a full moon (off by a day- yes I checked my memory, and the full moon was Feb 14, 1968), Omer and I sat in a vehicle that was not quite a car (don't ask), on the edges of a junk yard (who could make this stuff up?), and I said I would marry him. And perhaps proving my temporary insanity, I spent the next three days in the infirmary (pretty much the college hospital) with the worst case of flu I'd had at that point in life (maybe had one worse since then).

So we went out to celebrate. 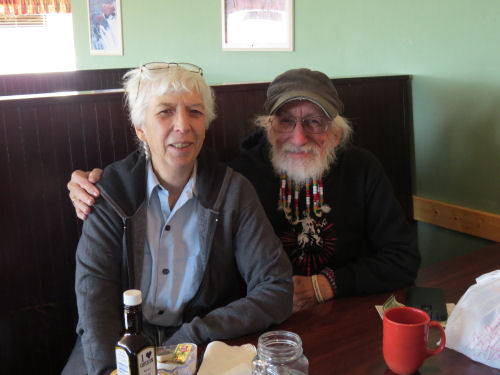 We went to a restaurant about 30 miles away, just to be a little different. It's the Open Hearth in Hart. The outside is pretty plain, 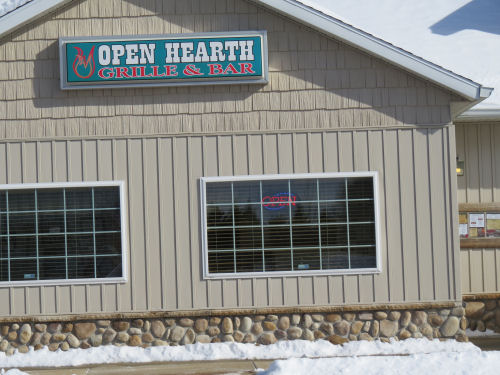 but the interior has nice atmosphere. Our timing was great for us, no one else was there. It was between regular lunch and dinner hours, but they let us order dinners. I had a yummy salad with grilled chicken and toasted pecans. Omer had a steak, but we forgot to take pictures of the food. You'll have to take my word for it, it was very good. 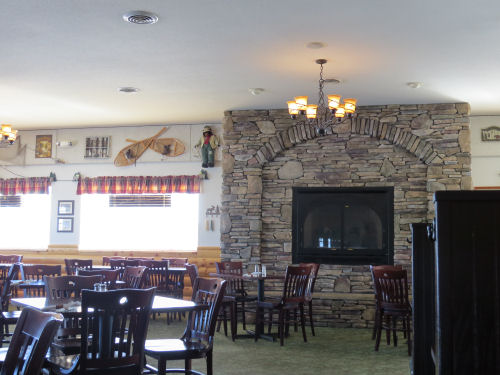 We got desserts to go: Chocolate Volcanoes! We had half when we got home. Yes, this is half. 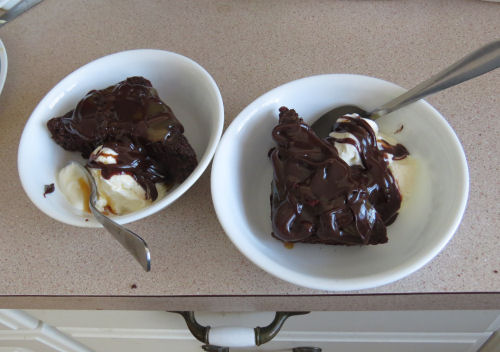 I also went skiing. The snow was really good, and it was a more like skiing than struggling along because my tracks from other days are getting fairly well defined (till the next big snow, blow, or melt). The blue sky was awesome above the hacienda (and everywhere). 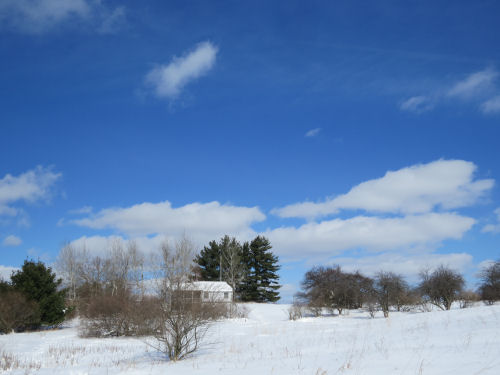 In other news: I have the outline for The ABZ Affair just about done. I spent a lot of time watching videos of old canning factory processes and buildings because the canning factory at Cherry Pit Junction is the setting for quite a bit of this book. I also got sidetracked watching some videos of old "What's My Line" game shows. I sure liked that when I was a kid, and I still do. It can be very funny even though it's very simple. I know it's not really a kid's show, but I liked it. What can I tell you.

I believe I have eaten there...do not remember having the chocolate volcano though...looks fabulous!

Well congratulations. A nice way to celebrate and even better that you had no crowd to deal with.
I remember what's my line.

I love the story! That is so sweet! And it surely must have been love to say "yes" on the fringes of a junk yard. :)

There is a story in that bit of history. FWIW, Sylvia and I will be celebrating Valentines Day tomorrow (off by a day).