Today I'm living my dream. Out exploring trails and collecting information. More on that another time. I'm curled up in the back of my car at a campsite. It's cooler now and the mosquitoes have backed off, so I'm really happy. I have electric, making the computer time extremely easy.

My first goal of the day was to travel to where the North Country Trail enters Michigan from Ohio. There's a newish little fun sign there now. 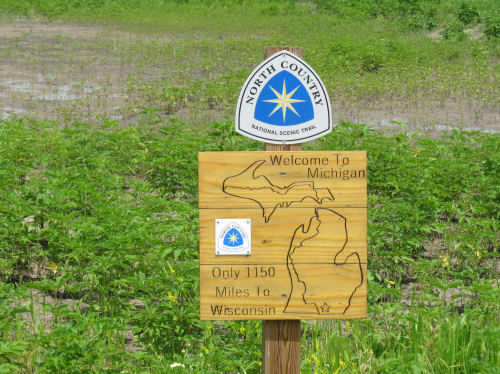 Then I followed the road portions till I got to Lost Nation State Game Area. I haven't been here for a long, long time, and when I was, it was winter. I have to say the area was hillier than I remembered, and much prettier in the summer. The humidity was brutal and the mosquitoes were thick, but it was awesome anyway. 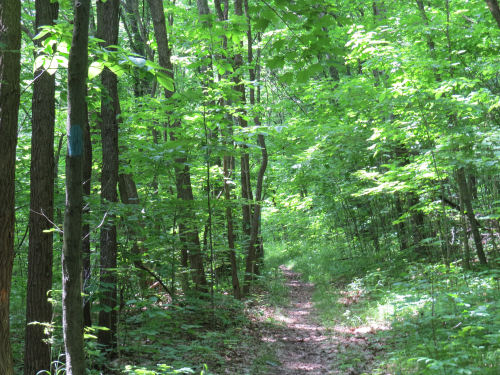 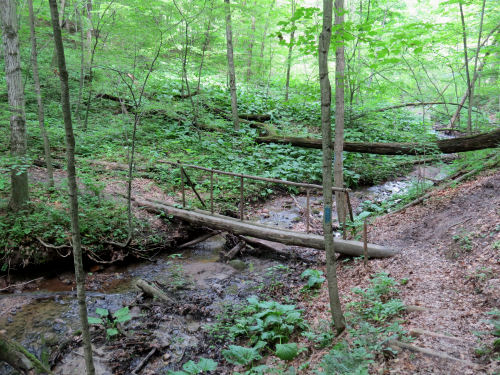 I did the southern portion (out and back). Then there's a road walk before another piece which I hope to do tomorrow. But it passes by Lake Number Eight. 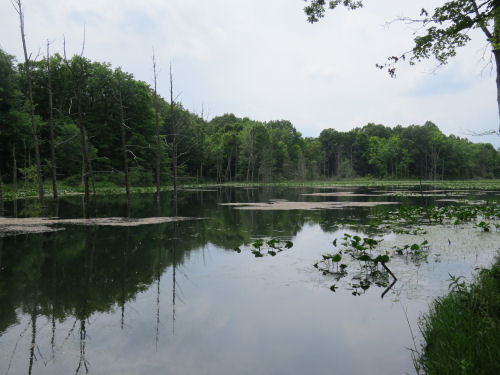 There's not a lot of off-road trail in SE Michigan, so this is a real gem, and it's even better than I thought. I hadn't seen the plants (except trees) in the winter. Turns out the vegetation is a lot higher quality than I expected.

This is a rather rare fern, Grape Fern, Botrychium virginianum. It indicates rich soil. 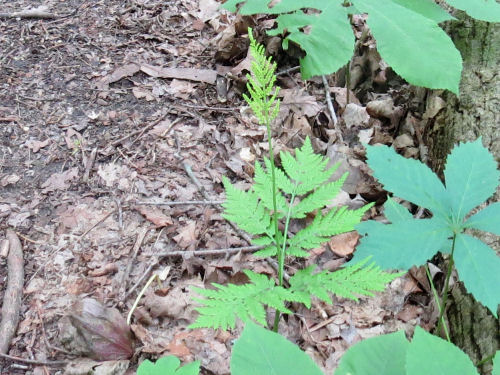 This shrub isn't anything special, but it doesn't grow in northern Michigan. I see it in Ohio and southern Michigan. This is the hop tree, Ptelea trifoliata. In this picture you can see the leaves, the remains of some flowers and those odd round winged seeds. It's actually in the citrus family! But not the same genus as lemons and limes and kumquats. It is a host plant for giant swallowtail butterflies. 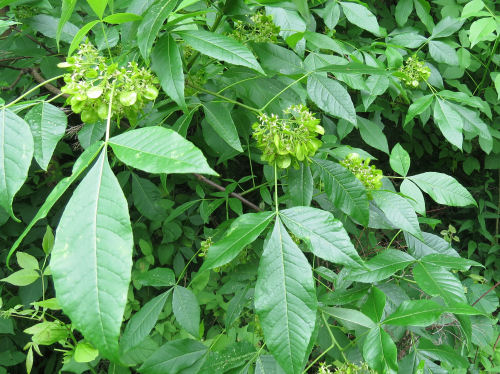 Finally, this is both wonderful and a horrible shame-on-me. I was focused on taking a picture of that bright orange stuff, which may be a slime mold. I love slime molds, even though they actually aren't plants. But I was concentrating on the orange, and I missed seeing those brown circles. I'm really sure that is a slime mold. I'm tempted to go back tomorrow, but it may be gone. They move like animals but reproduce more like plants. I think it wasn't too far in from one end of the piece I walked. I may have to go back. It would kill me to miss better pictures of that. On the other hand, I found one at home one morning that I didn't have pictures of. I went back that same afternoon, and it was gone. Well, I can't decide till morning anyway. It/they are on a decaying hemlock log. 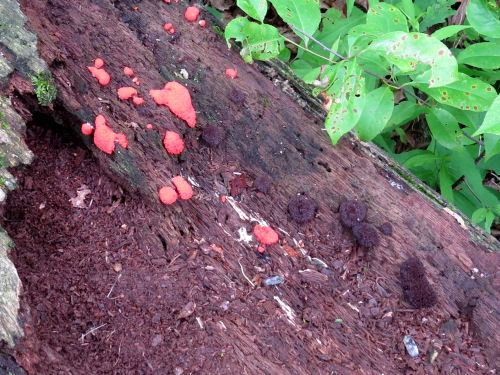 Finally, I followed the trail on in to Hillsdale, mostly by car beside the trail. It's on a rail trail for a number of miles there- another nice off-road piece. It crosses Black Bridge. This was a sad thing. The bridge itself is in much worse shape than when I was there last. This picture is taken from the road, but the trail is up on top of the bridge. Also, the vegetation has grown up so that you can't see the bridge as well. Since I'm not home I can't access the old pictures to show you the difference, but this bridge is going to need some work soon. The decking is getting bad too. 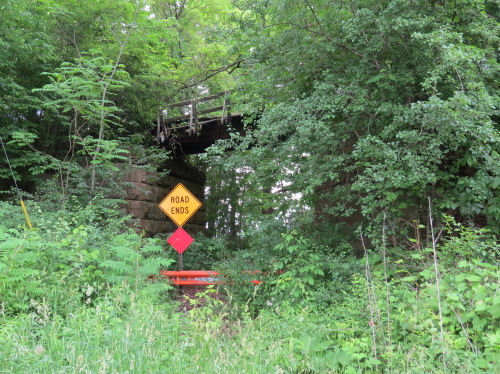 There are a lot more computer things I could do. I need to write my newspaper column this week, for one thing. But I think I'm tired. Maybe in the morning.

With the exception of the mosquitos it sounds like it's going good.

Does any other state have more NCT miles than Michigan?

Charlee: "Does ... does that map show the trail going across a lake?"
Chaplin: "How would you get across that? Do you have to swim?"
Charlee: "Is there a bridge? I hope there's a bridge."
Lulu: "I would swim across it! I don't mind!"