So, at the MOWA Conference last weekend, we had dinner and a tour on Friday night at the Iron Fish Distillery. It's out in the middle of nowhere, but has become a very attractive destination for diners and drinkers. This picture makes it look deserted, but I got there early and this was before the evening crowd showed up. The name is a takeoff on the popular steelhead sport fish. This is a craft distillery. Since I don't drink, this was way off my radar, but we had a tour of the plant. I have to say it was quite interesting. The farm is certified organic, and they even grind the grain on site to get the very freshest. The leftover mash goes to feed bison on a nearby farm. 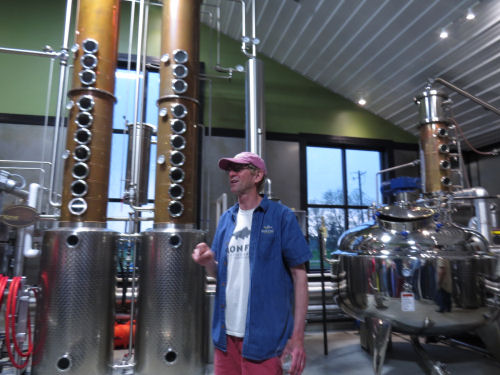 Their products have already won several awards. I'm not going to get it all quite right, but one of them was for a maple-aged bourbon. And I'm pretty sure it's their custom gin that took fourth in a world competition. 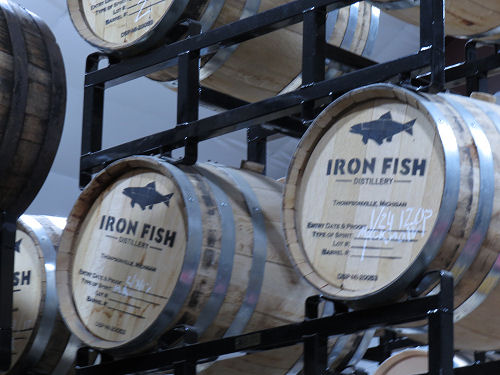 At any rate, it's a good example of how a small craft enterprise can help the local economy and make money.

The food was really delicious. There were appetizers, a gourmet salad, and pulled pork sandwiches and little specialty pizzas.

So, we had a tasting session after dinner. I did just barely taste each one. We tried a vodka (yowzer!), the prize-winning gin (sort of like sucking on a pine twig through a slice of orange), a whiskey (better), and the maple bourbon (I didn't care for the maple- I do actually like bourbon and the sugar sort of dampened it down). Then we had a sample of the maple syrup that is tinged with the bourbon from using the same barrels. Now that was good. The bourbon cut the sweetness.

We inducted Howard Tanner (the man who introduced coho salmon to the Great Lakes) into the MOWA Hall of Fame, and then had ice cream.

Today was more my style. I wrote in the morning, walked to town and did errands in the afternoon, and then worked on a bunch of odds and ends- trying to settle some of the mess I've generated.

A nice looking place and the inside has quite a set up there.

Charlee: "Ooh, iron fish?"
Chaplin: "That sounds hard to chew."
Lulu: "Don't you kitties get your fish inside metal cans?"
Charlee: "Well, yes, but Dada opens them for us."