I saw this moth almost a month ago, when I was camping with Annie, but I'm just getting around to identifying it. It's just over an inch wide. I'm waiting for confirmation from a couple of insect sites, but I'm pretty sure it's Plagodis phlogosaria, the scorched wing or straight line plagodis. 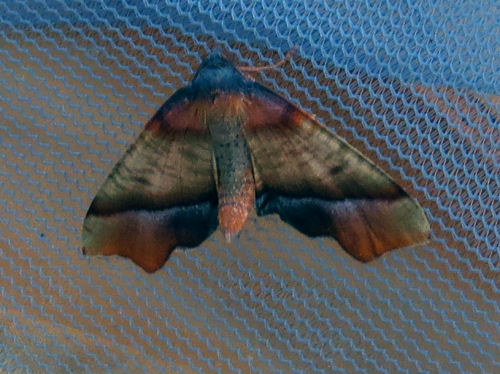 Apparently this is a pretty common moth of North America, but I don't recall seeing one before. For sure, I never tried to identify one before. After looking at a lot of pictures, I can tell you it seems to come in quite a variety of earthy hues, but that straight line across both sets of wings is consistent.

One web site shows the closest verified sighting near Chicago. I'm waiting to hear from them. If I'm wrong, I'll change the ID here.

The species name "phlogosaria" is from Greek phlogos, meaning flame. You might recognize the root word in the somewhat familiar phlogiston, which early alchemists thought was an element released in fire.

In other news: I wrote in the morning, did laundry, wrestled a 4x8 sheet of plywood out of the barn and up to the trailer, took the 16 nails and screws out of it. Then I worked on the photos from the hike I'm writing about. What a job! We had two cameras, and more or less just grabbed one when we wanted a picture. I'm trying to get them in something close to integrated order. No time stamps, of course. This was a year before I went digital.

Interesting color on that moth. Haven't seen one of those except for this pic.