Pictured Rocks is complete! In fact, of the 4 areas I was concerned about getting in the winter, I have 2.85 done. I guess I need to be happy I got all of the area from McCormick Wilderness to Red Road, and all of Pictured Rocks. I only have 15% of Porcupine Mountain Wilderness SP to do. The Trap Hills and some east of there is the big gap. It kills me to leave these for now, but I need to focus on what I was able to do in Nov/Dec.

The first fun feature of today's hike was AuSable Lighthouse. This has been on the trail forever. It was on the cover of the first book about the North Country Trail, a semi-guide by Wes Boyd. The skies looked stormy all morning. However, it made an interesting background. The tower was completed in 1874, and was in continual operation until 1958. There is still a solar powered light that shines over the lake. 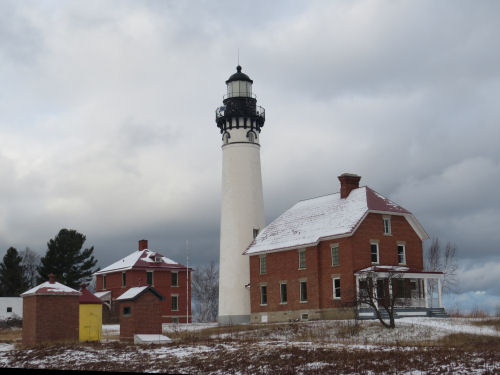 Very quickly, we approached the Grand Sable Dunes. This is a 5-mile stretch of dunes that have a glacial moraine beneath them, but sand blown by the wind covered them. This is called a perched dune. They usually look golden, but the snow mixed with sand made them very white. That sky really looked as if something was going to materialize, but it never did. 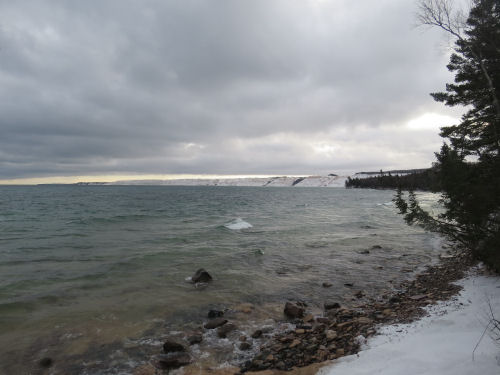 This is my favorite picture of the day- the dunes, with a dark forested headland beyond them and the nearly monochrome sky and water. 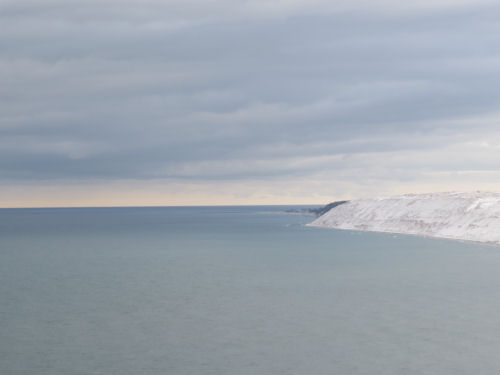 Next up was Grand Sable Lake which I barely remember passing in 1999. Seems odd that I'd forget such a large lake, but I did. 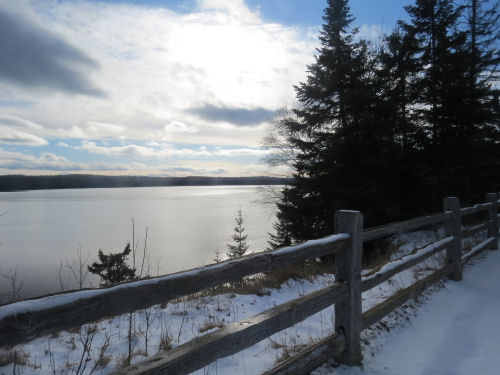 I sure didn't forget the outlet stream from it. This is Sable Falls. There was a lot of water today. It was pretty in 1999. Today it was impressive. 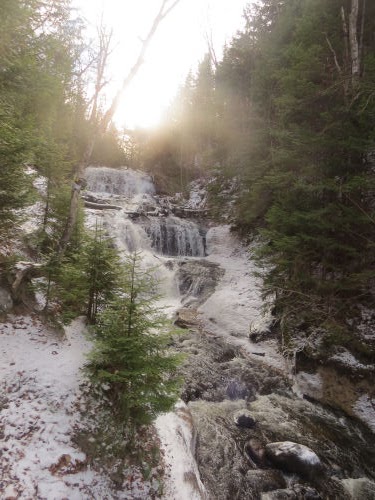 For the final treat of the day, it was almost like walking the beach at home. In fact, I kept thinking it was Lake Michigan. Of course, it was Superior. We did almost a mile on the frozen sand. (There is more of this in the next few days. Hope we don't catch it on a really windy one.) However, if I have to walk on sand, frozen is good. 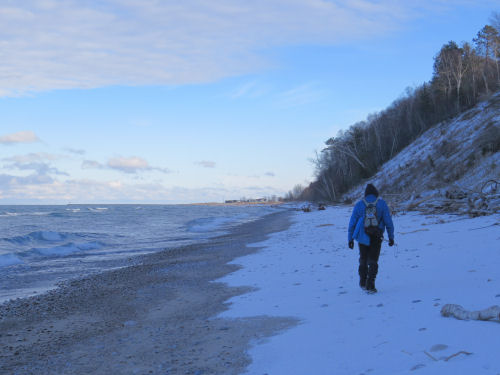 Today was packed. We left our last place (a motel that let us plug in the trailers) at 6 in the morning, and drove to our new location and set up in the dark. That was a test, but we pulled it off. Then we went to Grand Marais and bought meat ball sandwiches at a gas station for breakfast. Then we drove to the last place within Pictured Rocks that will become a snowmobile trail when the real snow hits. We finally started hiking at 9:30. But the trail was mostly easy which was a good thing. For some reason I did not sleep much last night (not anxious or anything... just awake), so now I plan to pass out really soon.

We definitely high-fived each other when the last vehicle was out of the Park without being snowed in or gated in or any mishaps. There were already two accidents on one of the roads in the past two days. We saw one being towed with a crumpled fender and headlight, but we couldn't figure out what he hit. The other one was a simple slide-into-a-tree mishap leaving divots in the bark and a pile of plastic car puzzle parts. We had no close calls. We both have all-wheel drive, and we know how to drive on snow.

Posted by Sharkbytes at 8:47 PM

So amazing in the winter, and I am glad that you see the beauty in your surroundings.

Ellie- it is different, and this isn't even real winter yet

Lulu- not sure about the house, but the foghorn building seems spooky.